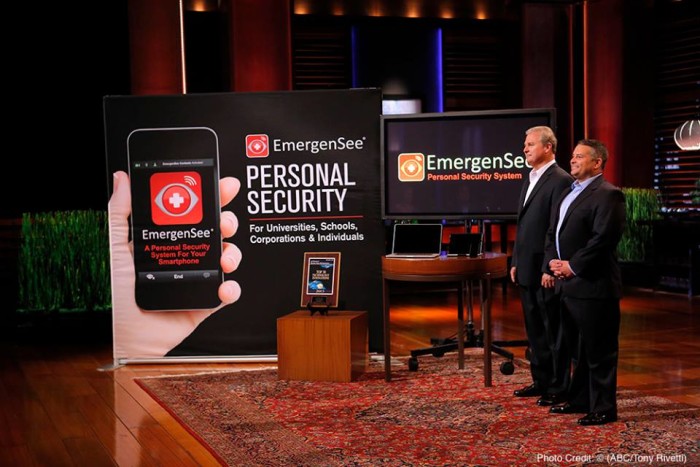 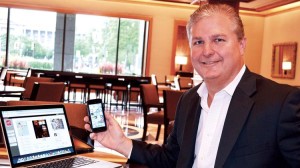 Every year, over 237 million calls are made to emergency centers across the United States. Not every emergency center can receive GPS coordinates or texts, and zero can receive video. EmergenSee eliminates these problems. EmergenSee is an app that turns a smart phone or tablet into a personal security system. With a touch of the app, EmergenSee streams live video, audio, GPS, location, and movements to get the help you need in an emergency immediately. It was founded by Phil Reitnour, an entrepreneur, and his partner Jason Friedberg, a former policeman. Phil had already personally invested over 3 million into developing EmergenSee, leaving only 68,000 left in his bank account. They applied to Shark Tank looking for money, exposure, and business advice.

Phil and Jason entered the Shark Tank seeking 250,000 in exchange for 10% of their business. Phil and Jason introduced themselves, and their product, and showed the sharks a video demonstrating the usage of the EmergenSee app. After watching the video, and hearing Phil and Jason’s introductions, the sharks started asking questions about the app. Jason clarified for them, stating that everything goes directly to their back end 911 operating center, meaning that Phil and Jason basically have their own security firm. Robert Herjavec asked what information the person in the center would be getting, and Jason said that they get audio, video, GPS, and texting capabilities.

Barbara Corcoran interjected and said she didn’t understand why EmergenSee was an advantage in emergency situations, when somebody could easily speed-dial 911. Jason defended EmergenSee by explaining that video can add a completely new dimension, and that speed-dial only results in muffled noise.

The sharks asked about the reach of the app, and Jason clarified that EmergenSee had 211,000 free subscribers, and 130 premium service subscribers. He also explained the geofence, which numerous colleges and government agencies had paid EmergenSee to have installed on their property at an average annually rate of 25,000.

The sharks asked about money, and Phil revealed that EmergenSee had made 185,000, and was predicting a profit around October. The sharks asked Phil how much he’d invested, and he said that he’d invested over 3 million. They asked about the technology, and Jason said that their main geek was a guy named Gene. Phil went on the explain that they’d outsourced to have the technology developed. Each phase of development cost between 500,000 and 800,000, leaving only 68,000 in Phil’s bank.

Mark Cuban emphasized the technological aspect of an app like EmergenSee, and stated that you have to know the technology to obtain success. He ultimately is out because neither Jason nor Phil know anything about technology. Barbara tells Phil and Jason that she thinks they’re nice people, but she simply doesn’t have the faith that their business will work. Kevin O’Leary said that numbers don’t lie, and that EmergenSee isn’t profitable, and he isn’t willing to be a part of the journey. Lori Greiner says she likes the concept, but isn’t sure if it’s being executed correctly. 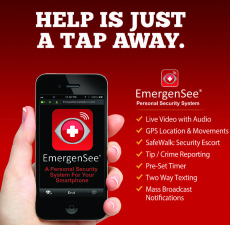 Robert says that Phil and Jason’s problem is that they started with too much money. Robert uses an example from his own life, where he kept putting money into an unsuccessful business, whereas when you don’t have money, you have to change your product. He also reiterated Mark’s point about technology, and says that if you’re a technology company, you need to have at least one technology person in leadership. Ultimately, all the sharks turned down EmergenSee.

Despite the fact that Phil and Jason didn’t get their desired 250,000 from the sharks, EmergenSee is still flourishing. Hours after Phil and Jason’s 2014 Shark Tank appearance, EmergenSee experienced a huge surge in downloads. EmergenSee is also a 2015 Powerful Answers Award $500,000 Winner, has a 4/5 rating on the Apple App Store, and only continues to grow!

Elizabeth Schneider
Elizabeth is a recent college graduate. Her hobbies include sleeping and dreaming. Occasionally she writes a sentence or two.
RELATED ARTICLES
Entertainment