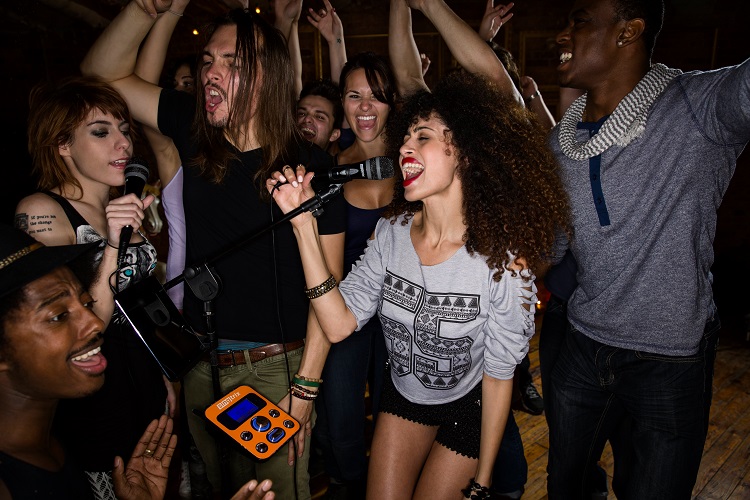 John Devecka and Eric Berkowitz from New York were already successful entrepreneurs before they ever appeared on the Shark Tank. The two were the brains behind the hugely successful Guitar Hero games, which have achieved global sales of over $3 billion.

It all started from a Karaoke drumming game, called Drumscape, that they devised in the 1990’s. John had built the first prototype in his parent’s garage, and the pair had then applied for, and been awarded, patents on their idea. The Worlds first drumming video game ‘MTV Drumscape’ was launched in 1999 and it was an instant hit in arcades around the World.

Activision had come along in 2004 and bought all of John and Eric’s music game patents, and the first Guitar Hero game became available on the Playstation 2 in 2005. The two were not satisfied with merely having brought virtual rock stardom to millions of people, and they turned their inventive sights onto the singing industry.

Karaoke is a global phenomenon that grew from its roots in Japan to gain a foothold in the entertainment industry throughout the World. When it was first introduced to America and Europe, it quickly became a common and enjoyable experience for fun loving people of all ages, as well as a source of endless terrible performances from those whose blood-alcohol level far surpassed their abilities. The effect that Karaoke has had on several generations cannot be overestimated, but can such an enjoyable experience be improved any further?

John & Eric thought it could and developed an electronic box of tricks that could transform the most discordant screech into a perfectly tuned vocal. In 2014 they opened Singtrix for business and appeared on Shark tank six months later, in October of that year.

When John and Eric appeared on the show they announced that their Singtrix business was so potentially valuable, that they were asking for $1.5 million, in exchange for just 5% of their business, a whopping $30 million valuation for the company.

John began his pitch by calling Singtrix the most exciting and revolutionary singing experience that has ever been created, it had the ability to turn anybody into a fantastic singer.

Eric explained that in order to test the effectiveness of their product, they had needed to find a particularly bad singer. They were fortunate that John fit the bill perfectly, he demonstrated for the sharks his complete lack of musical ability by singing a few lines, and his total lack of talent was clear for all to hear.

Eric announced that John would sing again, but this time the signal would run through the Singtrix unit. The Singtrix would pitch correct his warbling tone, keep him in tune and add a live vocal harmony. Eric tried to enthuse the sharks into a chorus of clapping to accompany his partner but the sharks were in no party mood

John started singing again and this time it was like listening to a choir. The Singtrix unit had worked some electronic wonders to his less than harmonious vocals and he now sang as sweetly as any bird in the sky. The sound was clearly electronically adjusted, but the improvement to John’s limited vocal abilities was beyond the ability of any voice coach on the planet to achieve.

All the sharks looked impressed with the Singtrix effect and Lori’s eyes lit up as she realized what a great product it would be to promote on her QVC platform.

‘Go high’ said Eric to his partner and John went up an octave or two, it was as if Angels were descending into the tank accompanied by the peal of celestial trumpets.

The Sharks felt far more like clapping after such an impressive demonstration and they all applauded John’s performance, even though they had been wincing at his off-key tone just moments earlier.

The pair ran through a few more effects for their appreciative audience. There was a reverb heavy announcers mode, a robotic style tone, and you could even convert your voice into a cool and funky electric guitar sound. Eric concluded the pitch by explaining that Singtrix had over 300 different effects, it could make a man speak like a woman, and vice versa, and could train singers to perform at a certain pitch.

The Singtrix unit left all the sharks impressed with its enjoyability and versatility, but would they be impressed enough to agree to such a high valuation?

Daymond asked how they had come up with the idea and Eric explained the history of Drumscape, the subsequent selling of their patents to Activision and the eventual release, due to their innovation, of Guitar Hero.

‘Did you do well?’ Robert Herjavec asked, referring to the deal with Activision, and John confirmed that they had, ‘We did very well’.

The subject of sales came up next and John disclosed that the business had achieved $1.2 million in sales in just the first six months of trading, it was an impressive figure but a few more questions from the sharks revealed that only about 1,000 of the highly priced units had actually been sold.

Robert Herjavec wanted to know how the $30 million valuation had been calculated for the company, as he knew it wasn’t based on previous sales. John explained that the company was in the process of signing a deal with a very large consumer electronics company, they would deal with the distribution of Singtrix to Europe and North America. Once the deal was complete they were expecting to sell at least 30,000 units, generating income of six to eight million dollars and profits of about 40% of that figure.

Mark Cuban wasn’t lulled by the sweet song of Singtrix and had big reservations. For the business to build an inventory, on a product that was so costly to make, they would need far more than $1.5 million. He suggested that they would need a ‘boat load of cash’ to cover all the associated storage, distribution and marketing costs that their growth would generate, and for those reasons he was out.

Kevin O’Leary was more interested, but his deal was a mile away from what Eric and John were looking for. He would supply the $1.5 million investment, but in exchange for 50% equity initially. Once the investment had been repaid his stake in the company would drop to 10% and he would receive a royalty of $2.50 per unit sold.

At the mention of royalties, a common element in Kevin’s offers, Daymond commented ‘There it is’ and exchanged a laugh with Mark Cuban. Kevin wasn’t put off ‘If you guys have a better deal let’s hear it’ he challenged.

Robert Herjavec did have a better deal, he saw his involvement as a long term play and offered $1.5 million for a 20% stake in Singtrix, with no other elements.

Lori didn’t let them consider Robert’s offer for long before joining the bidding. She thought John and Eric were impressive, as was their product, and she wanted to be involved. Surprisingly, she also liked the structure of Kevin’s offer and proposed something similar. She would offer the required amount, in exchange for 30% equity at first, falling to a 15% stake once the money was repaid. She would then receive the same $2.50 per unit royalty as Kevin had suggested.

Daymond couldn’t resist a quick jibe at Mr Wonderful, ‘What happened to you Lori, did Kevin bite you in the neck last night?’ he cracked, but Kevin was quick to defend the format of the deal ‘It makes a lot of sense’ he asserted, and offered to come in with Lori on her terms. She agreed and Kevin now promoted their joint deal by pointing out that John and Eric would have two sharks in partnership with them if they accepted.

There was some talk amongst Kevin and Robert about the benefits of their own relative offers, with Kevin suggesting that Robert’s plan would cost the entrepreneurs a fortune. Robert defended himself, asserting that his plan was better for the long term future of the business.

Daymond John joined the fray, and offered the pair another deal to consider before they discussed their options. He had connections in both the music and electronics markets and was prepared to offer $1.5 million in exchange for a 25% share in the business, in addition he would also finance the orders for the company so that none of his investment would need to be used for funding production.

Kevin had one final push, ‘If you value your equity, you’ll accept our deal’ he asserted, gesturing towards Lori. Eric and John considered their options for a moment, and then came back with a surprising counter offer.

Everything changed in a moment as they suggested they would be prepared to offer 7% for the same amount, it was a measly improvement on their prior position and the sharks looked amazed that they had suggested it.

There was some animated discussion between the Singtrix guys and the sharks, ‘But we invented Guitar Hero’ John appealed. ‘You invented it but you didn’t sell it’ Mark Cuban pointed out in reply.

As the lack of flexibility in John and Eric’s attitude became clear the sharks quickly lost interest, and they all withdrew their offers and dropped out in quick succession, leaving Singtrix without a deal in the tank.

Singtrix Now in 2018 – The After Shark Tank Update

It’s highly likely that Eric and John went into the tank with little ambition to gain a deal on the show. Their high valuation, combined with their reluctance to negotiate a more reasonable figure, was virtually guaranteed to leave them without an agreement, no matter how good their product was.

After the show, the pair were interviewed and revealed that they had been approached by producers of the show at a trade show. They had initially declined the offer of appearing but they were so impressed with the supportive attitude of the producers that they had changed their minds on the last day of the deadline.

When the show was first aired, in October 2014, the Singtrix Twitter account re-tweeted comments from other users of the social platform that suggested Eric and John never had any desire to make a deal on the show, and had merely appeared to gain some valuable free publicity. Although they were less than appreciative of the offers from the sharks, the sharks had nothing but good things to say about the Singtrix product itself. Even Kevin O’Leary, who tweeted after the show that John and Eric were ‘out of their minds’, had nothing negative to say about the product itself.

The distribution deal with a large consumer electronics company, that the pair had referred to on the show, was secured shortly after filming. VOXX Electronics have since become the exclusive distributor for the company in Europe and North America. The potential future of the Singtrix business is as sweet as John’s singing, when he’s using the Singtrix box that is, but only time will tell if Eric and John have another Guitar Hero on their hands.