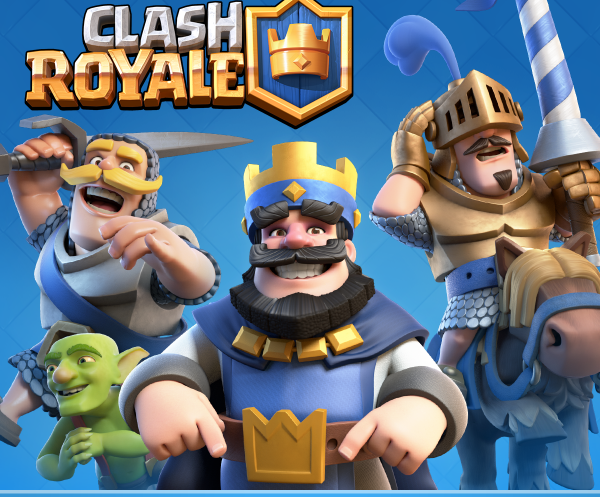 Clash Royale is a trading card game with a good mix of tower-defense and real-time strategy. Some people even add MOBA to it. You don’t just collect cards and build up a great deck; you also have to keep in mind their proper placement on the field and the right counters for whatever your opponent throws at you in real-time.

The combination of genres that Clash Royale did is one-of-a-kind. There doesn’t seem to be a game that is very much like it. However there are many other games on the mobile market that involve collecting cards and battling other players with them. If that’s what you are looking for then check out our list of games like Clash Royale. 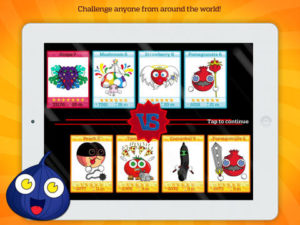 Fruitcraft can be considered as a casual card game due to its very simple gameplay that even kids won’t have a hard time getting into.

Cards are composed of gleeful fruits and vegetables armed with different kinds of weapons. They only have two stats which is power and the wait timer. Power represents a card’s health and damage and is subtracted when it is attacked by an opponent. The wait timer dictates the cooldown of a card before it can be used again. The more powerful a card is the longer its wait time will be. You can get more cards through the shop or in the auction house.

The main interface of the game is a colorful little village where fruits happily roam around. The buildings here represent the menus like shop, quests, PvP, and others. Your cards are responsible in defending your village from hostile players.

Battles are just as simple as watching your cards win or lose depending on their combined power levels. If there are cards that you don’t use then you can send them off to the mines to earn Gold. It is the only currency in Fruitcraft and you’ll inevitably need lots of it to beef up your army of produce.  Joining fellow players in groups called Tribes provides additional boosts to your cards.

Fruitcraft is incredibly easy to play and the battles don’t even take more than five seconds to finish. If you’re looking for a very fruity and fast-paced card game then try this one out. 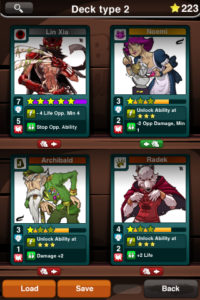 The game features a wide cast of character cards each with their own damage and power values, and some of them have active abilities. These characters belong to certain clans that provide shared bonuses.  Victories grant your cards experience points and they eventually level up which enhances their stats and unlocks abilities. This gives your cards some form of progression instead of being stuck with the same stats since the day you obtained them. You can get more cards from the store using in-game currency or real money.

A match starts with players being given four random cards from their decks. The attacking player chooses a card to fight with and is given the option of further boosting the card’s damage with the use of Pillz. The defending player only sees the base values of a card and not the amount of Pillz used, making bluffing a vital part of gameplay. A player wins when the opponent’s life is reduced to zero. Matches are quick and last only several turns, making the game an ideal lunch break pastime.

Urban Rivals has been around for a decade and is still going strong with many game modes to play with and cards to choose from. If you want a fantasy spin on the game then check out Fantasy Rivals, also from the same people behind Urban. 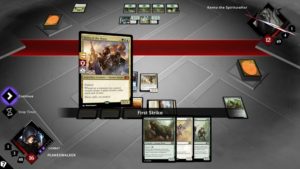 Magic: The Gathering is a very popular trading card game ever since its release way back in 1993. Magic 2015 is its latest incarnation in the realm of electronic gaming.

For the uninitiated, Magic pits two or more players against each other with 20 life points. They battle with the use of decks containing 60 cards. Each card is associated with a certain primary color (red, blue, white, black, and green) and many of which require “mana” to be used. The said mana is provided by playing “land” cards of the respective color. So if you need to play a card that costs two blue mana, you’ll need two “islands” (the land for blue mana) available.

Players utilize different strategies in order to win. Whether by amassing a large force of creatures, slinging sorceries, or attacking the opponent’s deck until it runs out of cards, there are many pathways to victory. The large assortment of cards and colors pave way for hundreds of possible combinations.

Magic 2015 allows players to create their own decks. Additional cards can be obtained from booster packs purchased in shops or through victories. There are hundreds of cards to be collected, and there is much grinding to be done if you’re on a quest for that ultimate deck. That is if you are not willing to spend some cash to hasten things up.

Those who are new to this game might be overwhelmed with many terminologies and variety of cards. The in-game tutorial will ensure that you can get a hang of things until you are ready for the actual duels. Just make sure that your device is up to the challenge as the game can be pretty resource demanding. 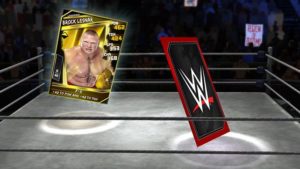 WWE fans that need to sate their wrestling appetite while waiting for the next episode of RAW can find satisfaction through the mobile game WWE Supercard.

Here the cards are your favorite superstars and they all have specific points in four statistical categories (power, speed, charisma, and toughness). Support cards like weapons and managers provide boosts to your superstars. Certain superstars have multiple cards depending on rarity so you might find yourself fighting a player with five John Cena cards. But if you have multiple cards of the same rarity then you can fuse them together to boost the superstar’s statistics.

There are many game modes to choose from. The most common one is Exhibition where you choose two divas, two support cards, and four superstars. Then you are given the choice of opponents who belong in the same ranking as you. Battles are as simple as choosing the right superstar for the match as matches have certain stipulations. For example in a Power match you need to use the superstar with a high ranking on that stat.  Tag team matches use two cards and it is imperative that they have a compatible alignment for a stat bonus, and an incompatibility results in a penalty.

Matches are portrayed with an animation where the chosen cards duke it out on a wrestling ring. Victorious players get to pick new cards to add to their decks, while the losers can only take home one card. Players with higher ranking have better chances of obtaining powerful cards.

WWE Supercard may sound like a lame concept but it actually is a great game. It may tempt you in using real money to purchase better cards but it is entirely possible to build a good deck without even spending a cent. 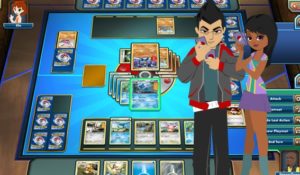 The Pokémon franchise has spawned a multitude of media and video games. Its trading card game was released in 1996 where people can battle each other like trainers. Many years later the game had its digital versions and, more recently, an Android incarnation but in open beta.

In the trading card game players must assemble a deck of 60 cards. Pokémon are sorted in their native types like fire, water, psychic, etc. The game starts with players drawing seven cards and putting one Pokémon in the table. Each Pokémon card has one or two attacks, some of which have certain requirements or inflicts status conditions. To use an attack a player must attach the required number of “energy cards” to that Pokémon.

As the game progresses players put up to five Pokémon on the “bench” where they can substitute the active Pokémon once it is knocked out or when the player decides to make it retreat.  A player wins when he defeats all of the opponent’s Pokémon, claims all six prizes (knocking out one Pokémon is equivalent to a prize), or when the opponent runs out of cards to draw from the deck.

Now with Pokémon TCG Online you can take the fun of dueling other trainers on your tablet. iOS players can enjoy the full product while those on Android will have to wait for its release sometime this year, unless you’re cool with playing an open beta version.

Have you tried any of these games? Do you know other games like Clash Royale? Let us know in the comments below.