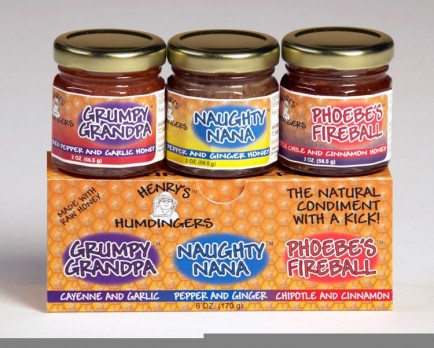 The most eye-catching thing about this young entrepreneur’s entrance into the Shark Tank is not only his outfit, but the fact he’s carrying a live container of bees. Henry Miller from Deming, Washington, has just entered the Shark Tank. Henry represents Henry’s Humdingers, and is seeking a $150,000 investment in exchange for a 25% equity stake in his company. Henry’s Humdingers is a natural condiment brand, consisting of honey with slight spices added into them – honey with a kick. It all started back when Henry was 11 years old and he sat next to a beekeeper on a plane, and learned about “Colony Collapse Disorder.” This meant that if all the bees in the world died, the entire world food chain would collapse; bees are an integral part of the ecosystem. As Henry points out, Kevin, “Mr. Wonderful,” wouldn’t be able to make any more money!

Continuing on, Henry asked his parents for a beehive for his 12th birthday. Henry then had so much sweet honey that he didn’t know what to do with it all, so he began to sell the excess. Henry decided then, he wanted to be different. There are so many people out there selling sweet honeys, Henry desired change. Henry then turned beekeeping into a business, and Henry’s Humdingers LLC was founded. Henry just adds spices to the honey, but the spices are what make the honey amazing. Henry’s Humdingers honey can be served over meatloaf, chicken, ice cream, and even martinis (or so Henry has been told).

Henry then distributes samples to each Shark, and he mentions that he has four flavors; Gumpy Grandpa, Naughty Nana, Hanky Panky, and Mama Drama. All of the Sharks are in love with the honey, finding the kick to be quite potent enough to set the honey apart from anything else they’ve ever hard. Mark asks if there are other flavored honeys out there, and Henry says that while there are other sweet-flavored honeys, there are no honeys with a spicy kick.

Lori asks what retailers Henry has made it into with Henry’s Humdingers, and Henry says that he is in 300 stores across 24 states in brands through the distributors Unify East and Unify West. So far, sales have been (within the past 3 years) have been $67,000. In the last 12 months, sales have been $50,000. Mark sums up the facts; in three years, Henry has made it into 300 stores an earned $50,000 in sales and asks Henry if he doesn’t think that the sales should be higher for the given amount of time. However, Henry says the main problem is that he doesn’t have the capital to take the business to a larger scale.

Robert asks who is actually running the business, as he says that he hopes that Henry didn’t drop out of school to run the business. His mom and dad are running the business while Henry takes his life like school and extracurriculars. His mom is partially responsible for running the business full-time, while Henry makes the executive decisions. Henry says that his mom is paid with a lot of love and teenage angst. Barb asks how much money the parents have invested in the business, which Henry replies with a large sum of $150,000. Robert mentions that one of his friends is the largest honey distributor and producer in Kansas, and it’s a huge operation; he wants to know how Henry intends to compete with people that already have such a large-scale setup. However, Henry mentions that since other companies typically don’t add spices, the process of cleaning out the spices from the manufacturing equipment is a lot of work.

Robert asks to clarify that he couldn’t just take over a honey-producing company and add the spices to them himself, but Henry insists that the process would be very expensive. Kevin mentions the fact that there might be a reason why the big honey-makers haven’t begun to add spices to their honey. Kevin thinks that the market might be super small, meaning there isn’t a whole lot of profit to be made off spiced honey. Henry says with the $150,000 investment, he will also look to start customer education to teach people about the differences of spiced honey from sweetened honey. Kevin says that he feels like that is going to be a lot of work and cost far more than the initial asking price of $150,000, but Mark says that Kevin does not like to start new businesses and is actually more like a vampire that just comes in and sucks up the lifeblood of existing businesses. However, Kevin insists that he is right; people really don’t want to buy spiced honey on a large scale. Mark gets defensive, and urges Kevin to exit the deal.

Mark asks if Henry has his own website, which Henry confirms. Mark then asks about marketing and advertisement, asking how Henry drives traffic. Henry says that he attends a lot of food shows, and the first one he actually attended was Natural Expo West and was contacted by a large grocery retailer who has since re-ordered 3 times. Kevin continues on, saying that the spiced honey is a very small category and the big honey guys could alter their plan. The big producers already have shelf space, so crushing Henry’s Humdingers wouldn’t be an issue, he says. Kevin drops a reality bomb; he feels that he is the only Shark who is going to be honest and upfront with Henry, and while all the other Sharks might offer a lot of encouragement, he ultimately feels that none of the other Sharks are going to write a check for Henry’s Humdingers to the tune of $150,000. Kevin exits.

Lori speaks next, saying that she finds it great that Henry is enterprising and that he is caring about bees and the ecology, but her personal opinion is that it is very difficult to sell something so spicy when it is mixed with honey, especially when most people already find plain honey attractive. Lori’s opinion is that an investment in Henry’s Humdingers would be a hard battle, and she does not feel guaranteed that she can receive her initial investment, so she exits the deal.

Barb says that she finds Henry irresistible since he’s so adorable, and says she honestly feels that Henry doesn’t need to find a partner. The public is going to find Henry lovely, and if Henry turned to crowdfunding, she says she honestly thinks Henry would find all the money he needs. However, Barb is out, but she feels that Henry has a long road but doesn’t need any of the Sharks to provide guidance.

Robert says that he wishes the three people, him, Henry, and Robert’s friend that owns the beekeeping operation in Kansas, could sit in a room together and discuss, but Mark interrupts Robert. Mark offers to increase the amount of the investment, but then between Mark and Robert, they would take majority ownership of Henry’s Humdingers. This would let Henry retain equity, and Robert asks for specifics. Mark proposes $300,000 for 60%, and reassures that in the history of Shark Tank, he has never offered to take majority control of a company.

Barb probes for a reason why, and Mark says that this is an entirely different scenario because Henry is actually creating a category. Henry would need pros who would come in and fight the battle, and with the $300,000 investment, Henry could pay back his parents for their effort and start growth of his own company.

However, Robert says that he doesn’t feel Mark is calculating for the risk, so instead, Robert asks for the offer to be a $300,000 investment in exchange for 25% of the business. Robert also sees the promise that the spiced honey market could absolutely blow up, and the trio of Mark, Robert, and Henry would have the first-mover’s advantage due to owning 100% of the market segment they started.

Henry asks if the two would consider anything other than majority ownership, but Robert says that when they have such a serious idea and the business prospect is there and they start to talk numbers, the reality is that the money will see beyond age. Lori urges Henry that it is his business and it is Henry’s business and to make his own decision.

In the end, Henry makes the decision to partner with Robert and Mark for an investment of $300,000 in exchange for 75% equity and two lifelong partners. In the end, emotions are high as Henry drops the news that the Sharks gave him $150,000 on the contingency that he would pay back his parents for their investment in a 12-year-old’s business, now turned highly successful.

Henry’s Humdingers Now in 2018 – The After Shark Tank Update

After young Henry’s appearance on the Shark Tank, life has never appeared to be busier for Henry. Henry has appeared on QVC and other shopping networks to show off his spiced honey products, and has revamped his online website with the expertise of Mark and Robert. Henry’s Humdingers can now be purchased individually online, or a 4-pack of 13 ounce jars can be purchased through the QVC home shopping network. Henry has started to really grow his brand, as well, as a thousand recipes that utilize Henry’s Humdingers spicy honey can be found on the Henry’s Humdingers website. In addition, Henry has also introduced one more flavor to his brand, the Diabolic Dad flavor.

If you would like to check out all the available flavors at Amazon.com you can click here.