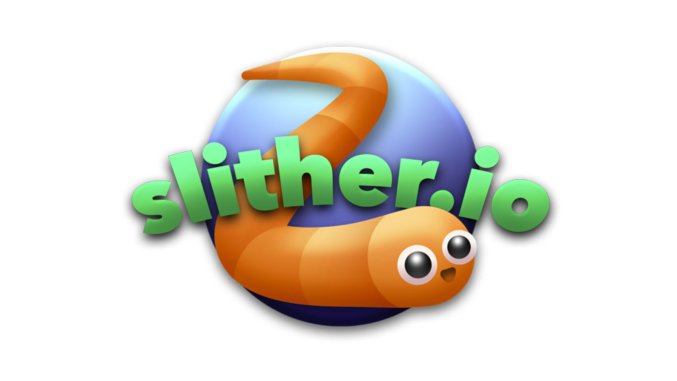 Slither.io is a multiplayer browser and mobile game where players move around as snakes and eat glowing pellets in order to grow. Growing in size allows players to consume the lesser serpents while the much larger reptiles pose a significant threat. Think of it as the multiplayer version of the classic Snake game in your ancient Nokia phones. It is incredibly successful and has been ranked as the top freeware game in the Apple App Store while critics praised its simple yet addictive gameplay.

There are a lot of other browser-based and mobile multiplayer games that are easily accessible for everyone to play. Agar.io is a great example with basically the same concept as Slither.io but instead of snakes you control petri dishes.

If you are looking for other browser games that you can play with other people worldwide then check out our list of top five games like Slither.io. 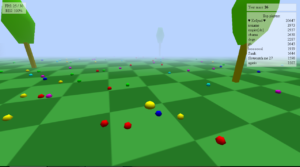 Change the perspective of Slither.io into a 3D view and you will get Biome3D.

The gameplay is just the same. Eat the dots on the field in order to grow in size so you can consume the smaller players. Aside from the bits of food there are trees but they seem to be nothing but decorations as you can actually pass through them. The 3D view allows you to see ahead if there is an opponent approaching. This feature is quite helpful in terms of avoiding getting eaten. But if you are used to the top-down view like in Slither.io then you can press the W key to adjust the camera accordingly.

Biome3D does not have other game modes aside from the standard Free for All. You are given a small selection of skins and three servers to choose from before starting the game. That’s just it, although they might be adding new features in the future. 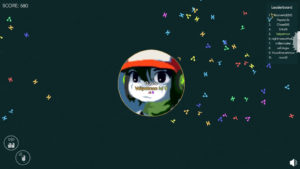 Mitos.is is just the same as Agar.io where you must consume the opposition and become the largest petri dish on the field. However this game is packed with more features and is available not only on mobile platforms but also in Steam.

The game has a variety of game modes to choose from like Soccer Mode, Humans vs. Zombies, and Hunger Games. Players are encouraged to create personal accounts as they can level up to better improve their stats like movement speed and resistance to viruses.

Players can purchase gear like swords and armor thanks to the game’s equipment system. These items boost the stats of dishes. Consumable items can help you in different ways like teleportation or a temporary speed boost. There are also items designed to mess up your enemies like the chainsaw and beer. Pets can help you eat food and destroy smaller foes. All of these can be purchased in the shop using Coins acquired through playing and finishing quests

The Guild system allows players to band together and participate in Guild Wars. This system also follows an automatic payment method that distributes Coins earned by the guild to the members once a week.

Mitos.is is an excellent choice if you are looking for an enhanced Agar.io experience, or for something like Slither.io but with more depth. 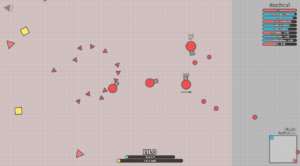 Diep.io is a browser game where you control a tank and destroy everyone and everything in sight. Be it with guns or by ramming your thick hull against their’s.

Unlike in Slither.io where you must eat the colorful pieces on the field, in Diep.io you are supposed to destroy them as they can damage you upon contact. Doing so will net you points and level up your tank once you fill up the experience bar. You will then be given a point to allocate on a certain stat like movement speed or bullet damage. Also once you reach level 15 you will be able to evolve your tank into a special class like firing over a long range or shooting multiple bullets in a direction or two. Levels 30 and 45 unlock more powerful choices.

The ability to customize tanks through stats and classes allow players to try different strategies. You can outfit your tank with multiple turrets for total carnage or turn it into a battering ram. Unique tanks like the “Manager” utilize drones instead of firing ammunition.

The game of course has the usual modes of Free for All and Team Deathmatch. Recently they added the “Mothership” mode where one player on each team is granted control of a unique vessel which must be protected at all costs.  The “Domination” mode pits two teams against each other in a bid to control the four powerful turrets in the field.

Diep.io currently does not support account creation nor does it have mobile versions. Do not mistake it for Tank.io in your phone’s app store as it is just a clone of Diep.io. 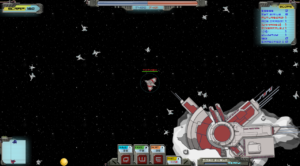 Combine the right amount of spaceships and pew pew pew and you get the browser game War in Space.

The red and blue teams are engaged in an intergalactic conflict and you must choose from one of the two factions and destroy the opposing team’s mothership. You fly around with your small ship and collect scraps that float around in space. The scrap serves as the in-game currency that you will use to upgrade your stats like movement speed or passive scrap income.

Once you have amassed enough scraps you can upgrade your ship in one of the three classes. There’s the utility class that can deal massive damage over a long range, the heavy class with a tough hull and shield, and of course a support class that heals nearby allies and moves fast. Earn more scraps and you can progress further with stronger ships. Each of these ships have their own unique abilities like a shield or summoning small fighter drones.

Credits serve as the premium currency which you can use to purchase aesthetic upgrades to your ship. You can also key in redeem codes to get items for free. Just look around for them on the Internet, they’re pretty easy to find.

War in Space has a good playerbase and provides a fun and fast-paced gameplay. Some players report that the red team has the higher chance of winning for unknown reasons. 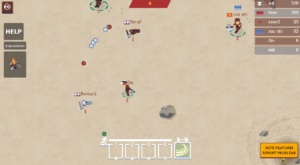 Grab your battleaxe and jump into the fray as a Grunt with nothing but bloodlust in mind.

Wilds.io plunges you into a desert battlefield populated by other players as you hack each other to death. Everything is presented in retro graphics and the visuals are well-done. The top-down perspective and the hack and slash combat is very accessible to players who are new to the game. The controls are also fluid and there is no problem in accurately moving your character.

The battlefield is littered not only with human players but with other dangers that also want you dead. There are little green goblins that run around and harass players while the gigantic ogre serves as a lumbering threat to everyone. Environmental hazards like the swirling patch of sand can instantly kill any player foolish enough to step in its center.

Of course not everything in the desert wants your head. Objects like potions and weapons lay strewn on the sand and await players who will make good use of them. Fighting is not as simple as mashing the left mouse button as Wilds.io allows you to jump and perform other agile feats.

Wilds.io  is free to play but there is an option of paying whatever amount you want to support the game and to unlock the Zerk character. The game is regularly updated and it seems that there will be new characters in the future.

There we go with our list of top five games like Slither.io. Have you played any of these games? Do you know other similar multiplayer games? Let us know in the comments below.