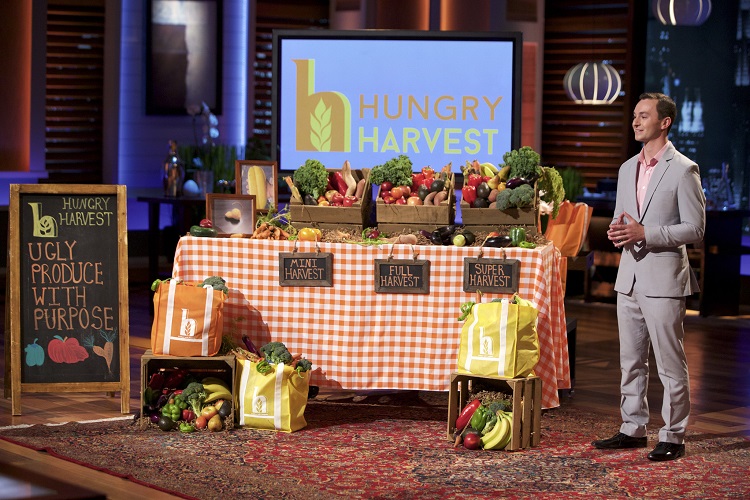 Evan Lutz, the CEO and co-founder of Hungry Harvest, was a business major from the University of Maryland with a strong interest in entrepreneurship, and a dream to run his own business after graduation. The Baltimore local wanted to run his venture in an unusual way, one that would help those in need, reduce wastage and still make a profit, by selling a product that nobody had previously wanted.

He had been greatly troubled by the poverty, hunger and injustice he saw on the mean streets of his home city everyday, but that was just a spark that led to his moment of inspiration. Evan discovered that food waste is a big problem everywhere, with 6 billion pounds of food being thrown away every year in the United States alone, enough to fill four NFL stadiums to the brim.

The young entrepreneur was surprised, and shocked, to learn that much of the fresh food wasted on farms was perfectly fine to eat, the only problem was the way it looked. Supermarkets and mass-market farming have made trays of identical, unblemished apples a common sight in your neighborhood store, along with similarly identical oranges, vegetables, fruit, you name it, it all looks fantastic, but what happens to all the food that doesn’t pass the cosmetic standard?

Unfortunately it all gets tossed into landfill, along with food that is wasted because of logistical problems. A farmer cannot produce an exact amount of cabbages as it’s impossible for them to get production figures exactly right, so there would always be wastage of those over produced items. In a city with so much poverty, Evan devised a solution that would benefit everyone involved.

He founded the Hungry Harvest business, in May 2014, along with fellow University of Maryland graduate John Zamora, and together they began signing people up for their unique subscription service. Customers would receive a weekly bag of fruit and vegetables, supplied from local farms, that would otherwise have gone to waste. Evan and John also donated a meal to families in need for every bag sold and began holding free farmers markets on a regular basis, donating fruit and vegetables to the community in bulk.

The pair believed that expanding the business to other areas of operation would be simple to achieve, if the company could find an investor to fund that growth. With that aim in mind they applied to appear on Shark Tank and were soon accepted.

When Evan appeared on Shark Tank in January 2016, he announced he was hoping to achieve a $50,000 investment in exchange for 5% equity in his business.

He explained to the sharks about the wastage that occurred due to cosmetic imperfections in fruits and vegetables, and the enormous amount of food that was thrown away every year.

He continued his enthusiastic pitch by detailing for the sharks the Hungry Harvest business model, the subscription service for customers, and the charitable donations that were made for every sale. He explained that customers would feel great for joining the service because they were saving time and money, eating healthily and supporting local farmers. In addition they were helping the needy and reducing food waste. He finished up by asserting that Hungry Harvest sold ‘Produce with purpose’ and asked the sharks ‘Who’s hungry?’

It was a well delivered pitch, and likeable Evan, who flashed his killer smile throughout his appearance handed out samples to the sharks.

Lori Greiner asked about the options available to customers and Evan ran through the three sizes of order that subscribers could choose, from the $15 Mini Harvest, to the $35 Super Harvest.

Kevin inquired where Hungry Harvest was purchasing the food. The entrepreneur explained about local farmers, and the logistical problems they faced with over production of certain items. He explained that his business would buy that surplus produce from the farmers, with the added bonus that they could never over order and face inventory issues, because the subscription based service meant that they knew exactly how much food to purchase.

All the sharks seemed fairly impressed, with Evan himself, the charitable nature of the business and the unique model that appeared to benefit everyone involved. Mark Cuban asked about the sales history of the business. Evan revealed that in the first six months of business, the company had made sales of $37,000, in the last six months, revenue had totalled an impressive $104,000.

‘Good for you’ said Barbara Corcoran. Up to this point the sharks had seemed interested in Hungry Harvest, but Evan was about to reveal a less encouraging aspect of the company.

He told the sharks that the business was not currently profitable, in the current year the loss had been approximately $20,000. Kevin asked if Evan was paying himself a salary and Evan confirmed he received no payments from the company at all.

Lori asked about the charitable efforts of the company and Evan explained more about the food donated for every sale, and the free farmers markets where produce was given away to entire neighborhoods, but Kevin O’Leary couldn’t grasp Evan’s strategy, he questioned why Hungry Harvest was continuing to be charitable when it was making a loss.

Barbara Corcoran was full of admiration for Evan and his mission, but she preferred her businesses to be run by good people and to be ‘greedy’. Once a business was making millions in profit, it could then afford to give away large charitable donations, but Evan’s strategy of making donations and contributions to society was misguided when his own company was losing money. She thought his business model was potentially unsustainable and told him she was most disturbed over how much Evan was in love with the idea behind his business. Although she admired his motives, she doubted that Evan had the experience to build the business any further, and with that Barbara dropped out.

Robert Herjavec was fully behind a business that gave people an opportunity to empower themselves, in a heartfelt speech, he stated that he wasn’t going to argue with the other sharks, or bid for a deal with them. Evan had requested $50,000 for 5% of his business and Robert would make a straight offer of $100,000 in exchange for 10% equity. He told the young entrepreneur that he could help scale the business, it was what he did. Robert seemed to be expecting an answer to his, admittedly generous, offer right away, but Evan asked if he could speak with the other sharks first.

Kevin O’Leary didn’t see why Evan shouldn’t hear any other offers, but Robert merely said ‘I’m not going to argue with you’, seemingly unwilling to negotiate the offer any further, and also seeming not to want any competition from the other sharks.

Kevin spoke directly to Evan, he told him that the business ‘fit’ with him, and also could work alongside some of his other investments, he asserted that he could help with the scaling of the business as well as the logistics of an expanded customer base. He began pondering aloud about the percentage of equity he was looking for, Robert tried to interrupt him and Kevin exclaimed irritably ‘Let me tell him my offer’.

Apparently temporarily deaf to Kevin, Robert continued to put pressure on Evan, speaking again about how much he wanted to invest in the company, yet implying that he was about to withdraw his offer if it wasn’t accepted immediately, saying ‘Either accept my offer or argue with Kevin’.

Barbara Corcoran advised Evan ‘Speak up young man’, and Evan, who looked under quite a bit of pressure by now, considered for a moment before saying to Robert ‘I’d love to accept your offer’, and the two shook hands on the deal, both smiling now that the tension had passed.

Hungry Harvest Now in 2018 – The After Shark Tank Update

Evan’s vision of reducing hunger, waste and environmental damage clearly impressed a good proportion of the Shark Tank audience that saw him strike a deal with Robert Herjavec. 1,000 new subscribers to the Hungry Harvest service had signed up within a week of his appearance on the show, and the increased business allowed the company to expand its area of operations before a month had passed. The service now covers Washington, Baltimore, and also Philadelphia. Future plans have been made to expand the Hungry Harvest service into New York City, Richmond and Pittsburgh before the end of 2016.

Evan also posted on the company website some details of the attention his appearance had generated. Daily visitors to the company website had increased from 150 to 3,000, and support from the company social media sites was equally impressive, the Hungry Harvest Facebook Page quadrupled its fan base in a matter of days. All other social media sites received a flood of attention and Evan had clearly been poised to take advantage of the publicity prior to his segment on the show being aired.

Even without the charitable and inspirational ethos of the Hungry Harvest business, it’s easy to see why the idea appeals to so many people. A bag of fresh fruit and vegetables, delivered to your door at a reasonable price every week, that also helps others in need, but Evan hasn’t rested on his laurels and depended upon generosity to help his business grow.

The company website is well designed and full of not just information about the altruistic achievements of Hungry Harvest itself. Evan appeared on ABC7 breakfast TV in February 2016 to promote the company, as well as to make a rather splendid looking home made coleslaw, and it seems the young entrepreneur has a little bit of Gordon Ramsay in him, although fortunately he doesn’t indulge in the swearing and ranting too.

Evan has filled the Hungry Harvest site with a mouth watering range of recipes that you might find as surprisingly delicious looking as I did. All in all, the company has a strong online presence and seems to have built up a community of followers that not only love the idea behind the business, but they love the vegetables too.

With the support and guidance of Robert Herjavec behind the charitable business, it’s likely that more of us will soon be able to subscribe for a weekly bag of goodies too, and with the success of the business, more donations to those in need can be made, and food waste can be reduced further.

It’s hard to say exactly how successful Hungry Harvest will be as a business in the future, but as Robert Herjavec stated on the show, he’s behind the ethos of the business one hundred percent. For Evan and Hungry Harvest, he is the kind of partner the business really needs, as it continues its commendable and charitable mission, to deliver produce with purpose.