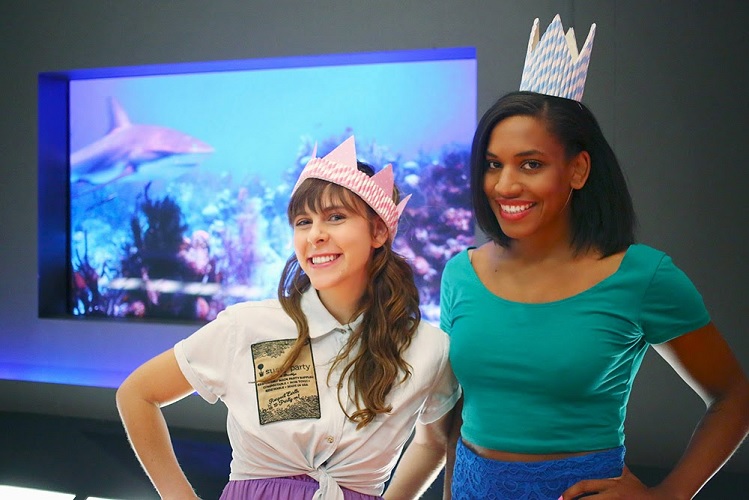 Most people love a good party, a few glasses of champagne, some good food and attractive people to dance with. Jessica Holsey & Emily Doubilet, the founders of Susty Party, were particularly fond of parties. The pair met at one, at home in Brooklyn, New York and they soon began discussing business opportunities.

Jessica was looking for an opportunity to leave her Wall Street job, and make better use of her Harvard Economics degree, Emily was an environmental studies graduate, and between them they devised a way to form their own business, and yet still keep the party going.

They founded Susty Party, Susty being short for sustainable, and begun retailing ecologically friendly, high quality party supplies to fellow fun lovers. They sourced their products from factories that employed visually impaired workers, and all the products were made from recycled materials or renewable resources. Their aim was to create a business that followed their own personal ethos, a company that was ecologically friendly, profitable and all the while providing fun times for customers.

A suggestion at a business meeting, made half jokingly, that the duo should apply for Shark Tank was soon acted upon, and Jessica and Emily began the long application process. Eventually they were informed of the success of their application, and after a quick celebration dance, which was a very common event for the entrepreneurial pair, they began preparing for their appearance.

There are fun people, who get invited to all the parties, and then there are the really fun people, who make the party happen around them. Jessica and Emily made sure the sharks knew which sort of people they were when they entered the tank. With Party hats on and many a high-five between them, the two entrepreneurs walked in, introduced themselves and announced that they were seeking a $250,000 investment in exchange for 10% equity in their business.

Just in case the Sharks were still somehow oblivious to the fun-loving aspect to their characters, they ensured it soon became clear as they launched into an energetic pitch, full of much arm waving and carousing of selected phrases. The combination of serious business points of interest, interspersed with carefree enjoyment as the pitch progressed became almost surreal, but there was no doubt the Susty Party pair were enjoying the pitch, and the sharks seemed to be too.

The performance appeared to be drawing to a close, but the fun wasn’t over yet. The pair encouraged the sharks to get up and dance ‘Susty Party Style’. You will probably be surprised to learn that the first shark to jump out of his seat, within seconds of the offer, was Kevin O’Leary.

Lori Greiner and Barbara Corcoran quickly followed Kevin’s example, and it was a surprise to see that Mr Wonderful was a hit on the dance floor. I never expected to see Kevin O’Leary busting some moves in the shark tank with four lovely ladies, but unless he was merely up there to swipe a few ecologically friendly party plates, and the editing concealed his crime, it appears Kevin is quite a party animal himself, when he’s not eviscerating strategically unsound investment opportunities that is.

Eventually the fun had to take a back seat, the sharks sat back with a party drink and the atmosphere was almost convivial for a moment, but some parties have a habit of turning sour at a moments notice.

Robert Herjavec asked if Susty Party were the sole suppliers of their products. Emily confirmed they were ‘contract manufactured’ in a fairly smooth attempt to avoid the question, but not smoothly enough for the sharks. Barbara rephrased the question more simplistically, ‘Can I buy these only from you’. This time Jessica had a go at avoiding it, she began talking about ‘sales channel distribution’, but Robert had had enough of the game by now, and he interrupted her.

The atmosphere settled down, there were some more questions about pricing and manufacture. Eventually the subject under discussion came around to sales.

Jessica revealed that so far that year, the business had exceeded a million dollars in sales, and year-end figures were projected to be $1.5 million.

The party brightened up at such positive news. ‘Fantastic’ declared Lori, and Robert Herjavec confirmed he was taking the entrepreneurs ‘way more seriously now’.

Jessica capitalized on the renewed interest from the sharks. She explained that, with an investment from a shark, the business could reasonably expect to expand sales channels, as well as its product line, and achieve $5 million in sales the following year.

Unfortunately, the profits achieved were nowhere near as impressive as the sales figures. Jessica reluctantly revealed that due to large fees, mainly connected to introducing new products, the business was running at a loss of approximately $80,000 that year. Mark Cuban looked concerned, he asked how much capital the business had to back it up at the current time, Jessica revealed that company funds were currently only about $30,000.

The party atmosphere seemed to die a little more with the revelation, Mark Cuban remarked that such limited capital was ‘a problem’. Robert asked what value inventory the company had. Jessica admitted that they held stock of at least $125,000 and the sharks made a few disapproving noises.

Kevin O’Leary was ready to dampen the celebratory spirit a little more. He pointed out that nothing about Susty Party was propitiatory, anybody could buy the same products and sell them on. Jessica defended the business, she began my stating that Susty Party was ‘authentic’. ‘I’m authentic too’ countered Kevin. ‘We’re responsive’ continued Jessica after a pause. ‘I’m more responsive’ challenged Kevin, with a playful glint in his eye, ‘My point is anyone can do what you’re doing’.

Barbara too was concerned about propitiatory value, but she was more concerned about the company losses. She couldn’t see any way to make money back on an investment, and with that Barbara dropped out.

Robert had more bad news for the pair, he too saw a tremendous amount of risk in the Susty Party business, and felt there was an enormous amount to be achieved before the company could manage stable profitability, and because of that, he was out too.

The celebrations were quickly dying down, and it was time for Lori to leave the party too. She told the pair that she had recently invested in a business that planned to bring out recycled paper party plates, in the very near future, and due to that, she was uninterested in a deal with the pair.

Kevin O’Leary spoke next, and surprised everyone when he announced he had an offer to make, but when he announced it, it wasn’t exactly what Jessica and Emily had in mind. He would supply $250,000 as a loan, but he also wanted 30% equity in the business too.

The pair didn’t look too enthused with the deal offered and looked to Mark Cuban for an alternative one, but Mark had a variety of concerns about the business. The huge inventory, and low assets, pointed to bad management for him, the propitiatory issues left the business vulnerable, and he was out too.

‘All roads lead back to Mr Wonderful’ Kevin exclaimed cheerfully as all eyes turned back to him. There was some more banter between Kevin and the Susty Party pair, a weak counter offer was half heartedly made by Jessica, but Kevin refused to budge an inch from his position. Reluctant to reject their only offer, but unwilling to meet Kevin’s terms the entrepreneurs were left with little choice, and left to take the party with them somewhere else.

Susty Party Now in 2018 – The After Shark Tank Update

On May 3rd, 2014, the day after their segment was first aired, Susty Party made the following statement.

We’re glad that we didn’t take a deal. Shark Tank forced us to really look inside ourselves, become crystal clear with our own values, and learn to communicate them. And as a result, we’ve found mission-aligned investors, and continued to grow. Our investors believe in Susty Party products, believe in us as entrepreneurs, and believe everyone deserves the best products when entertaining friends and family. Like us, they are passionate about creating jobs for communities in need.

It appeared to be a gentle rebuke for the sharks, but with the promising news that the business had achieved a deal, and with a far more ethically aligned partner than Jessica and Emily had found in the sharks. A few days later they revealed that the Susty Party segment, although first shown in May 2014, had actually been filmed in September 2013, and they had raised half a million dollars of capital, in a seed investment round, just two months after filming. In an improvement to the deal they were seeking on Shark Tank, they achieved the investment for just 8% equity in the company.

The pair used their new capital buoyancy to fund, and launch, their new product range. Whole Foods Market assisted with a producer loan, to help the new products reach its shelves, and to establish customized variety packs of Susty Party products.

Thriving alongside their new ‘mission-aligned’ investors, Susty Party closed a second round of financing in May 2014, weeks after their segment was first aired, helped in part by their appearance on the show. That good news was soon eclipsed by even better developments. Target announced that they would begin selling 27 different Susty Party products in 276 of its stores nationwide. As if that wasn’t enough good news, Target also intended to promote the introduction of Susty Party to its stores by giving the products premium retail spaces.

The Susty Party Website is a functional affair with a wide range of party products available for sale, but there is a lack of complementary content common to business websites, the Susty Party site seems strangely dull for a party company. There are a wide variety of their products available on Amazon too, and although there isn’t a huge amount of feedback from customers, the reviews that have been made are all generally positive, usually praising the products, and the ethical motives of the business, in equal measure.

The only worrying sign I discovered online was a sudden stop in Facebook posts, in March 2016, after several years of regular daily posts. I’m not suggesting hangovers are involved, but it’s an inevitable suspicion with two party loving entrepreneurs like the Susty Party pair.

With the success that they have achieved since their appearance on the show, there can be no doubt that Jessica and Emily have had many of their customary celebration dances, and perhaps one or two hangovers too. Having survived dancing with sharks, avoiding a dreadful deal with Mr Wonderful, and emerging from a defeat in the tank, only to achieve greater success than they previously could have imagined, you can be sure that the party won’t be ending any time soon for the two fun-loving entrepreneurs.