The Paint Brush Cover Update – What Happened After Shark Tank 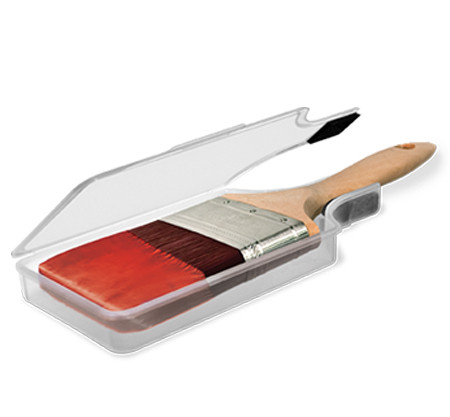 A trio consisting of two brothers and a family friend have just stepped into the Shark Tank. Sal and John DePaola, brothers, and Anthony Caputo all represent The Paint Brush Cover created by Likwid Concepts, and have come to the Shark Tank seeking $50,000 in exchange for a 10% stake in their company.
John starts with his story; between the three of them, the trio has over 60 years in painting experience. Not just canvas paintings, but big room paintings and even murals, too; the three are professionals. However, through the years, one thing has bothered them the most, and anyone who paints can relate that there is never a convenient location or time that you can set the paintbrush down to take a call, drive your children somewhere, or anything else without causing the paint to dry out or get ruined.
Sal admits that he thinks they have revolutionized the painting industry with just a piece of plastic, and they finally reveal exactly what The Paint Brush Cover is. Sal admits that maybe the Sharks have seen something like it and maybe own something like it, but they came up with it; since the Paint Brush Cover has a unique, airtight design, they can store paint brushes for weeks at a time without worrying about the brush drying out. This can easily save any painter hundreds a year in money.
Robert asks if that is true, and the trio says that they have tested it for a period of up to 3 months at a time. They even have a brush with them that they’ve carried all around their travels, and it’s still wet. Robert says that he is finding hard to believe that the solution for saving your paintbrushes is so simple, but Sal says that the plastic container stores close to 100% humidity. It’s the same idea as tupperware; if you put paint in a tupperware container and leave it on a shelf, properly sealed, the paint will still be in liquid form when you open it months later.
Kevin asks how many Paint Brush Covers have been sold, and so far the trio has sold 17,000 units for a total of $35,000. Nearly 50% of that revenue has come in over the course of the past 3 years, John says. Each unit costs $.41 to make, and they are sold for $2 to a retailer. Retailers then sell each Paint Brush cover for around $2.99. Robert asks how Paint Brush Covers are all sold, and Sal explains that they started off selling from door-to-door in an old-fashioned sense, and nobody said no. They actually went to 3 stores this morning, and all 3 of those stores purchased units.
Lori asks if the trio has tried to sell to companies like Lowe’s or Home Depot, but Sal says at the current moment, they are working on selling to Wal-Mart. They do have distributors, however, and these distributors are in 6 different countries. Lori and Barbara also admit that, like Robert, they can’t believe there isn’t a product out there like The Paint Brush Cover – it just doesn’t seem possible. The three said that between them, they do have at least 20 years of professional painting experience, and they used to rely on saran wrap but got tired of having to re-wrap and unwrap every time it came to painting.
Mark returns to the business at hand, and asks what the trio will do with the $50,000 investment they came to the Shark Tank seeking. The first thing they intend to do is restock the inventory, as they actually have letters-of-intents (bills of intent to begin manufacturing by a certain date) for hundreds of thousands of units. Bunning’s, “the Home Depot of Australia,” are in talks with the trio who wanted a quote for 250 pallets. This would be around $450,000 in revenue generated. However, Mark brings up that he sees a red flag; why did the trio only ask for $50,000 knowing that they could potentially have a sale which requires much more capital? 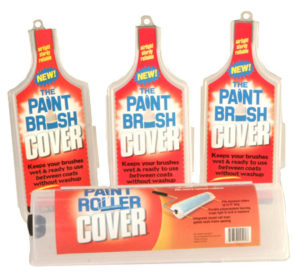 Sal says that they feel confident enough in their company but don’t want to give up too much equity, which Kevin says is a smart strategy; equity now may seem cheap but in the end it will end up being expensive, especially if the company is a winner. Kevin starts with an offer, and says that he likes the product; he offers the $50,000 in exchange for 10% royalty on all the sales. He also says that they think they will need a lot more money, and he was only starting with what they asked for; Kevin offers a further line of credit, and says he sees promise enough in The Paint Brush Cover that he can help bring it to retail.
Robert asks if the trio are still open to deals, and John confirms they are. Robert offers $50,000 in exchange for a 20% investment in the company. Anthony asks what Kevin would bring to the business, which area he would be able to focus on, and Kevin says that royalties are his true incentive and that they would align their interests due to the sales generating Kevin money and the sales generating revenue to keep Likwid Concepts and The Paint Brush Cover afloat. Kevin says he would be focusing primarily on big box partners and moving the store, as he would only profit if sales are made, even if the sales are not profitable. Kevin says he can bring the buyers to the trio.
However, Anthony says he just wants the assurance that Kevin is interested in the company as well, and not just sales for the company. Kevin then offers a $100,000 cash bonus for only 5% investment in The Paint Brush Cover, which he says now further aligns their goals. Since Kevin would make about $.20 on each sale, this would allow him to start recovering his capital.
Lori makes an offer next, consisting of $100,000 at a 20% investment, plus if they were to accept the deal without further hesitation, she will put up another $100,000 which will go towards paying for the first purchase orders.
Lori says that she thinks the sales velocity will be so fast that they won’t be able to keep up with inventory. This makes the offer a $200,000 in exchange for 20%, and Lori says that she would easily be able to get The Paint Brush Cover onto QVC, a home-shopping network, and that she would also be able to move the product into stores like Wal-Mart, Home Depot, Menard’s, Lowe’s, and many, many more.
However, Barb also makes an offer, but Lori says that if they listen to the offer she will rescind the additional $100,000. Barb also points out that Mark hasn’t even made an offer. Sal, however, stops the Sharks and says that they know what they want to do. Sal instructs John to “go and get it,” and Sal dips behind the stage setup to pull out a shirt. In the end, the trio accept Lori’s offer without even entertaining an offer from Barb and Mark.
As the trio walk out, Barb admits that she was prepared to offer the trio a $300,000 investment in exchange for 10% equity and a $500,000 line of credit if they needed it. Lori made out like a bandit with her