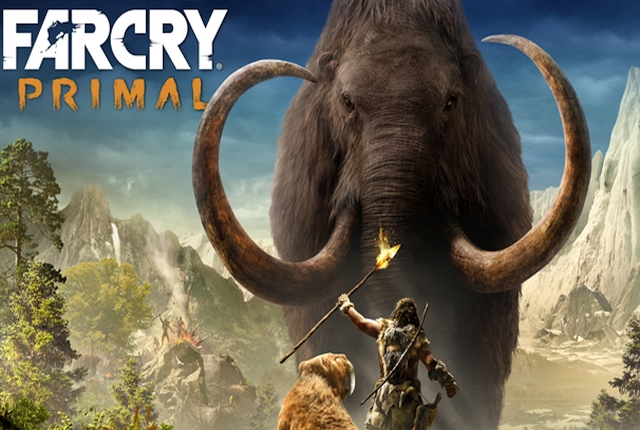 Far Cry: Primal is an open-world action adventure game that takes place in the Stone Age. Among the main features of the game are exploration and crafting. You’ll be able to create and enhance your weapons using materials you found in the world. There are also a lot of side quests and other activities that you can engage in without worrying about the main storyline.

Games like Skyrim and Fallout are among the most famous open-world games. Aside from those two juggernauts let us take a look at the top five games in 2018 like Far Cry: Primal that allows you to explore and do something else aside from following the plot. 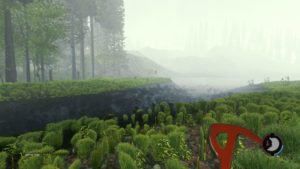 The Forest takes place in an island where you are stuck after surviving a plane crash. Your young companion was dragged away by the island’s hideous inhabitants and you are left to survive on your own.

Staying alive in this beautiful yet hostile environment is more than just bashing enemies to death. You are required to gather resources which will be used to construct shelter, equipment, and simple to elaborate traps. It is also important to maintain hunger and energy levels lest you succumb to their negative effects.

The enemies range from wildlife to humanoid Cannibals, and the more deformed and disturbing foes dwell in the caves beneath the island. The Cannibals do not simply run towards you with weapons raised. Instead they take their time in studying your movements and your shelter. It is possible to scare them off but eventually they will attack you. Defenses like walls and traps can keep them at bay but these hostiles will adapt and send more-specialized troops to tear your fortifications down.  You should always keep an eye on your surroundings as your foes can be lurking anywhere, especially when you are opening your inventory as this act will not freeze time unlike in other games.

The Forest is still in Alpha on Steam and currently supports both single-player and multiplayer modes. As for now the game has no ending and does not have any missions or quests for you to follow. Nevertheless it is an incredible open-world survival experience. 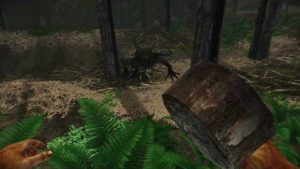 Miasmata puts you in the shoes of scientist Robert Hughes who is on a quest to find a cure for the plague affecting his body. Aside from the maladies that strain your body, a dangerous and invincible Creature stalks you from the shadows.

Exploration is the most important aspect of this game. You will rely on environmental landmarks and the Cartography system to manually update your map as it does not automatically do so. Animals and plants populate the island, and the latter is important in creating medicine used to alleviate maladies and to enhance bodily functions. Outposts scattered on the island provide save points and the equipment used to create medicine. There is no hunger system but dehydration is one of the plague’s symptoms hence a constant supply of potable water is crucial in staying alive. Once you finally made the cure your next step is to leave the island in order to beat the game.

The Creature acts as the only living antagonist. It spawns at certain locations and will follow you like a predator. When you are detected it will give chase and will only end if you manage to outrun the Creature or hide from it. There is no other way to defeat it other than to find the cure.

Miasmata can be played on Steam or purchased from GOG.com. If you love exploring a beautiful world while taking careful steps to ensure survival then this game is for you. 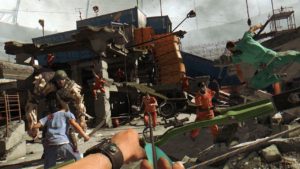 Dying Light features a good mix of first-person action and exploration with parkour mechanics. The game takes place in the quarantined city of Harran which is infested with zombies. The protagonist Kyle Crane was sent to locate a certain file but becomes caught between survivors, zombies, and bandits.

Just like in Far Cry: Primal crafting plays a major role in Dying Light in which you can create hundreds of possible weapons and consumable items using blueprints and materials. Zombies are fought with either melee or ranged weapons, the former degrading with each use while the latter is hampered by very limited ammo supplies. Traps provide various tactical advantages and some come with disadvantages. For example explosive traps pack a punch but can attract more enemies with its noise.

While the sun is up the zombies are slow and do not pose a significant threat unless they are in large numbers. This time of the day is best spent on exploration, rescuing survivors, and finding supplies. When night strikes the enemies deal more damage and become very agile, allowing them to sprint fast and even climb rooftops.

Crane can earn points through his actions which are then spent in purchasing skills from the different trees. The Agility skill tree earns points through parkour movement while the Combat tree is through… combat. The purchasable skills in these trees help Crane become a more formidable survivor.

Dying Light is available on Steam, Xbox One, and Playstation 4. Its expansion pack Dying Light: The Following introduces a larger map, vehicles, and new weapons. 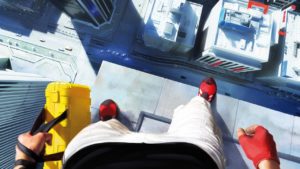 Mirror’s Edge in 2008 was a revolutionary first-person game as it focused on agile movement through parkour and less on combat elements. Catalyst was released eight years later and came with improvements plus a reboot on the story. It takes place in the city named Glass where freerunner Faith Connors works as a Runner, a delivery man of sorts, while resisting the forces of the Kruger Holding corporation.

Similar to its predecessor Catalyst allows you to scale walls, jump over impossible gaps, and other feats in parkour. The open-world environment is pretty much a huge and colorful playground where you can practice your moves in missions and side-missions. The environment also allows you to take different paths instead of following the same linear direction in completing objectives.

Its combat mechanics rely on momentum to deliver the most powerful of strikes, although this part of the game is criticized for being clunky and boring. Faith never wields any weaponry and instead simply relies on her speed and limbs to knock enemies unconscious or toss them off great heights.

The multiplayer modes include Beat Location Emitter and Time Trials. The former allows you to tag certain locations in the game to show to other players; while the latter lets you create a trail and other players can compete to see who clears it the fastest.

Catalyst provides a dizzying action-adventure experience in an open-world environment. You can play it on Xbox One and Playstation 4, or buy it in the game’s official website for Windows. 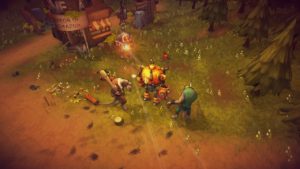 Now for something a little bit different from Far Cry: Primal. Goliath combines the elements of action adventure gaming with role-playing and crafting. It takes place in an open-world and is on a top-down perspective. It was originally a cancelled Kickstarter campaign by developer Whalebox Studios but development still continued.

The game throws you into a world where monsters the size of buildings roam the land. To avoid getting stomped so easily you can harvest resources that will allow you to create huge robots called Goliaths to fight off those towering beasts. There are four kinds of Goliaths based on different materials. Each of them has their own abilities and advantages based on terrain and weather. Aside from these mechanical marvels you can also create other items and weapons to aid you.

Aside from the monsters there are also four factions that inhabit this world. You can choose a certain faction to join and help them either destroy the others or establish peace. These factions also have their own unique Goliath plans that will be given to you.

There are a lot of quests divided into four chapters that comprise the main storyline. Each new game is not the same as the world is procedurally generated so don’t expect to see the same exact things twice.

Get it on Steam and GOG.com so you can start building your towering contraptions.

There we go with our top five games like Far Cry: Primal. Have you played these games? Do you know other games that have open-world elements or crafting? Let us know in the comments below.