Top Ten Most Expensive Homes in the World – 2018 Update 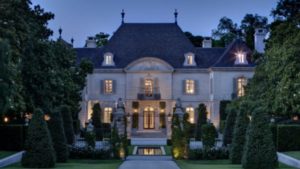 Home ownership is often seen as a major accomplishment, especially considering the past decade’s effects on the housing market. For these estates though, your average total price for a house would barely cover the monthly mortgage. Here, we cover the top 10 most expensive homes in the world. To produce proper estimates, land and home appraisals are used as opposed to previous sale prices which may fluctuate due to market conditions and each property had to have at minimum one direct owner. 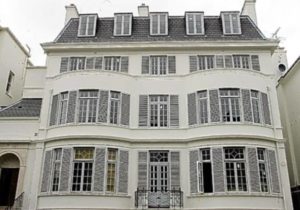 A London Preperatory School turned Mansion, Phillimore Gardens holds 10 bedrooms, an indoor pool, sauna, gym, and cinema. The current owner is Olena Pinchuk, the daughter of a previous Ukrainian President and prominent philanthropist who focuses most of her work on AIDS treatment and cure development. Earlier in the decade this home would have topped this list in value as in 2013, this property had been speculated as the be worth $1.6 Billion. The husband of Mrs. Pinchuk, Viktor, at this time states that the estate may be going on the market soon as a way to cash in on short term real estate investments. 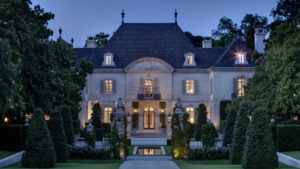 Keeping to Texas’s claim that everything is bigger there, the Hicks Estate is big on size and price. Previously owned by Tom Hicks who also has stakes in Liverpool FC, the Dallas Stars and the Texas Rangers sports teams, this mansion has a surrounding property of 25 acres. Originally built in the 1930’s, the mansion itself spans an incredible 28,000 square feet with a master suite the size of some houses at 3,000 square feet. The interior is covered in high quality marble, and has wonderfully vaulted ceilings whose walls are adorned with large windows. Situated next to such estates as the George W. Bush estate as neighbors, the owner of this estate would be in very famous company. 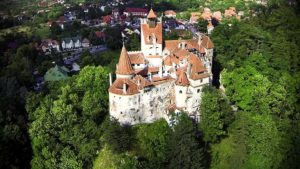 Among the most famous of estates, Bran Castle is perhaps better known as “Dracula’s Castle”. Originally built as a fortress for Teutonic Knights between Wallachia and Transylvania, this castle is situated in a lovely hillside with a fantastic view of the surrounding environment. One of the few residences open to the public, tours are performed almost every day of the year for a little over $10 per person. With ancient mason work, plenty of corridors and a haunting silhouette, this may be not only among the most expensive homes in the world, but also one of the most creepy to visit. 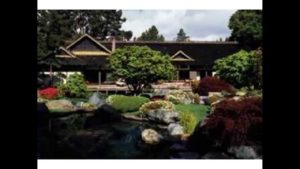 Owned by the CEO of Oracle Corporation, Larry Ellison’s Woodside, California estate carries some very unique features. Within the 6.8 acre property is a 2.3 acre land made lake, which has fog dispensers built into strategic spots upon the shore to further showcase the exterior Japanese garden theme. There is also a horse farm, which at one point was put on the market for one tenth the value of the rest of the property. As for the home itself, it shows a classic elegance in clean lines and gentle slopes. However, construction of the home is quite unique in that while it can withstand earthquakes over 7.0, it was made without nails. 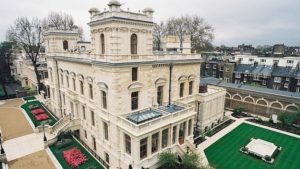 For those that love homes with a little bit of a secret history behind them, Kensington Palace Gardens is ideal. Originally built for the British Directorate of Military Intelligence, MI19 in World War 2 as a logistics center, this palace which used to contain a torture center now is one of the most desired addresses in the world. Located next to both the Israeli and Russian embassies, one would find that visiting this estate is a bit of a hassle as armed security checkpoints on both sides. The mansion itself has 10 bedrooms, marble statues and an indoor pool surrounded by pillars, this locale has all the comforts that any ambassador could hope for. 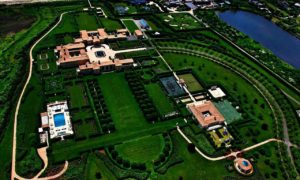 Despite the United States having no formal royalty, this residence in upstate New York could easily be confused for a palace for a king or queen. With three swimming pools, two tennis courts and a bowling alley, and a $150,000 hot tub, entertainment is not hard to come by in this 29 bedroom, 39 bathroom estate. Set on 63 acres, the buildings themselves are a combined 100,000 square feet with over half of that being the central house. The owners of the Fairfield Pond residence paid an estimated $397,000 in property taxes back in 2007, and have paid similar sums since. 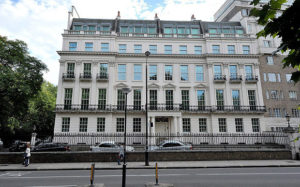 Previously owned by a Lebanese Prime Minister and Saudi Prince, Rutland Gate has stood empty for several years. This is particularly sad, as even the bathrooms of this mansion are luxurious, including gold adorned faucets and railings. This 60,000 square foot otherwise takes serious inspiration from the Victorian era with classically crafted mouldings, windows and décor, it’s quite easy to lose track of exactly what year you are in. The property also has been prefurnished with a large number of masterpiece paintings which match the estate quite perfectly. 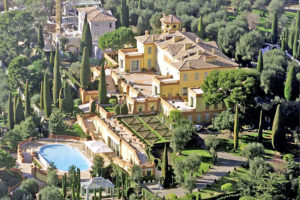 Set on the coast of the French Riviera, the Leopolda Estate has seen itself become a home to royals, a World War One military hospital, and a film set after World War Two before returning to being a residence. Situated on 18 acres, Leopolda boasts a pool with a direct line of site to the Riviera, and was designed in a neo-greco style that compliments the location wonderfully. With 11 bedrooms and 14 bathrooms, it certainly is not the largest estate on this list, but it is among the most elegant. 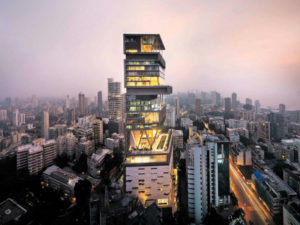 Decidedly modern and nearly abstract in its construction, Antillia is located in South Mumbai, India. The owner, Mukesh Dhirubhai Amban, is one of India’s richest petrochemical tycoons, and employs a total of 600 staff to maintain this skyscraper residence. Antillia is unique among high rises, as each floor takes the space of what two typically would for any other tower, making each floor have with it remarkably tall ceilings so as to never make an occupant feel crowded. This is perhaps the most controversial property on this list, as this display of wealth is in one of India’s poorest cities, where a significant portion of children under five are severely underweight, and the local population sees it as a disgrace that such a monument to wealth could be built there. 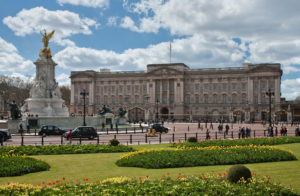 Topping off our list of most expensive homes in the world is easily also the most frequently visited. The home of Queen Elizabeth II and the seat of royal power in the United Kingdom was originally built in 1703 for the Duke of Buckingham. With all houses considered, Buckingham Palace is nearly 1,000,000 square feet, and features an architecture that has been replicated the world over for its elegance and prominence. Throughout the property are countless monuments, gardens and smaller residences that make this palace the most identifiable of private “homes” in the United Kingdom.

Cody Carmichael
University graduate in Psychology, and health worker. On my off time I'm usually tinkering with tech or traveling to the ends of the globe.
RELATED ARTICLES
Home & Garden