Central Italy was struck by a magnitude 6.1 earthquake early Wednesday. The news were revealed by the European Mediterranean Seismological Center.

The earthquake began at around 3:30 a.m. near the city of Perugia. In nearby cities, such as Rieti, people left their homes and watched as the earthquake destroyed parts of the city. Electricity has also been interrupted in some of the cities where the earthquake struck.

The central Italian town of Amatrice was badly damaged by the earthquake and the mayor, Sergio Perozzi, told the RAI state television that the roads in and out of town are cut off. He added that half of the town is gone. Many of the residents of the town are still trapped under debris and are currently waiting for rescuers.

The shocks were also felt in Rome, which is located nearly 105 miles away from Perugia. Residents of the capital felt the movement and then the aftershocks. Reports say more than ten aftershocks have struck central Italy. 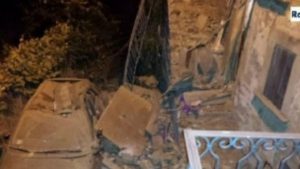 A number of buildings were destroyed by the earthquake and residents have started to post pictures of the damage left by the magnitude 6.1 earthquake. The images appearing on social media show the destruction of the earthquake, with debris on the street and collapsed buildings.

The European Mediterranean Seismological Center says the magnitude of the earthquake was 6.1. But the U.S. Geological Survey put the magnitude at 6.2. The epicenter was in Norcia, a town in the province of Perugia. The most affected towns are said to be Norcia, Amatrice and Accumoli. Four people have been killed by the earthquake, which happened as residents of the towns slept. The office of Italy’s Prime Minister Matteo Renzi said on Twitter that equipment was being taken to the areas.