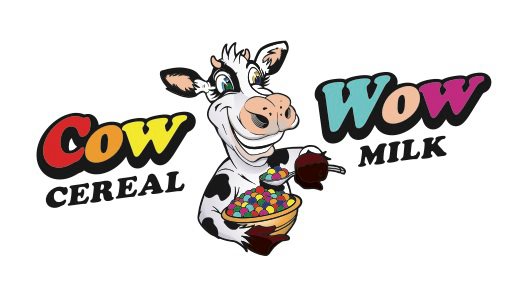 Stepping into the Shark Tank are a couple who have a real love for breakfast food. Meet Chris Pouy and Tiffany Panhilason, the founders of Cow Wow Cereal Milk. They are searching for $250,000 in return for 10% of their company. After a nice bowl of cereal, do you know that amazing leftover milk that tastes amazing? That cereal milk has been bottled and made healthy through Cow Wow Cereal Milk. Cow Wow is aimed towards young, developing children, and Chris and Tiffany get kids to try Cow Wow by telling them a story. Once upon a time, there was a dairy farm that ran out of hay, so the farmers ran to the cupboards and fed their cows cereal. The next morning, when they milked their cows, the milk tasted sweet and delicious, just like the cereal milk.

Tiffany and Chris hand out samples, while Chris steps out of the ridiculous cow outfit he entered the Shark Tank in. Fruity Trudy and Chocolate Chip Kathy are handed out to each of the Sharks, while Chris mentions that they actually made a mistake in production on the label – there are only 20 grams of sugar, not 25 (still a lot, for a kid!) 14 grams of sugar are actually in a serving of milk. Kevin points out that the two are selling the most ridiculous idea, milk that tastes like the leftover milk from a cereal bowl. Lori asks what inspired the cereal, and Chris and Tiffany say they are just major cereal lovers with an idea. They went to a frozen yogurt place one night, which typically has at least 12 to 20 flavors depending on the size of the store, and he noticed that milk only has three flavors – milk vanilla, chocolate, and strawberry.

Daymond asks if the product is marketable – the humor is there that the bottom of the bowl milk tastes the best, but he asks if people are actually interested in it. However, Steve Tisch, the guest shark on this episode of Shark Tank (the owner of the New York Giants and a film producer, actually the only person to have both a Super Bowl ring and an Emmy award) mentions that he is a cereal-for-dinner type of guy and he actually loves the milk out of the bottom of the bowl. Even Mark agrees, but Daymond does not see the appeal – he associates that part of the meal with drool and backwash. Steve asks if they have tested the product, and Chris says that kids love it; Daymond mentions he is dairy intolerant, and defers to Steve for the taste test, which Steve bombs with a B grade. It doesn’t have enough cereal taste, he says, and it’s not quite sweet enough – it doesn’t remind him enough of his favorite cereal. Kevin asks about sales, and Tiffany reveals they are only $20,000 with just launching. So far, there have been reorders in every grocery store that they have been in – all eight Bristle Farms, three test stores from Albertson’s, and they are a step away from securing a $100,000 deal with one of the largest grocers in the country.

Kevin asks what market are they attempting to garner share in (milk, dairy products, sweetened dairy products, etc. – the specific niche market), and Chris says that their product is advertised as flavored milk, a 1.5 billion dollar industry. The milk does not need to be refrigerated, but it tastes better when it is cold; Kevin says that getting refrigerated space is an entirely different story, since these items typically have higher margins and to rent out the refrigerated store space requires huge capital and product movement. Mark mentions that they are competing with Borden’s, a flavored milk company that can easily target a new product to the same group as Cow Wow, and at that point they are up against millions of dollars which is nearly insurmountable. With a $250,000, that won’t even get Cow Wow Cereal Milk into the game. Mark folds out of the game first. 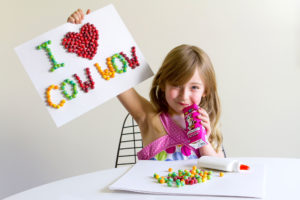 Daymond mentions that with 20 grams of sugar (and 170 calories, Lori backs up Daymond), that is a lot for a little carton sold to a kid. There already is an obesity issue, but Chris insists that their drink has less sugar than any juice or flavored milk already on the market. Not long before the filming of this episode in 2013, there was a movement for flavored milk to be removed from schools, and there was a huge backlash from kids removed. At this point, things take a dive for the worse – Chris insists that “one child from Ohio wrote a five paragraph essay,” and Mark interrupts Chris, asking him “Do you realize how bad you just screwed up?” Mark lambasts Chris, saying that if he did not bring up the fact that flavored milk was removed from schools, NONE of the Sharks would have known that flavored milk was attempted to be removed from schools. However, they just tipped off the Sharks with one of the biggest red flags, but Chris says that he wants to be honest because the kids started drinking soda and juice and demanded their milk back. Milk is more wholesome and delicious than soda and juice, even flavored milk, so the children begged for milk to be brought back, and chocolate milk was even being marketed as the perfect recovery drink for athletes. Chocolate milk, during the “Got milk?” campaign, was being advertised to athletes because the ratio of carbs to proteins was better than most anything else. However, Kevin insists that Cow Wow Cereal Milk is being advertised for children and not athletes.

Daymond says that he thinks Cow Wow Cereal Milk is dangerous to advertise kids, and folds out of the deal as well. Chris continues to insist that Cow Wow would be a great alternative for kids and that they could bring it back to schools, but Lori stops them and says she doesn’t even love milk. Without love and passion, she exits the deal.

Steve Tisch says he loves the concept and branding, but the taste is not quite there in terms of taste. The taste he rated as a B, and he needs it to be an A, and the product needs more development – he also exits the deal.

Kevin drops his hilarious “all roads lead to Kevin” line, but with a twist – all cows come back to the pasteur, farmer Kevin’s pasteur. Flavored milk is a very old and established space at a $1.5 billion market, Kevin says, and with a $2.5 million evaluation on Cow Wow Cereal Milk, the writing appears on the wall for Chris and Tiffany. Why would Kevin want to tie up his money in a business in an already extremely competitive environment? They would need a far more concise business plan that can more clearly explain to any one of the Sharks why the couple thinks Cow Wow has a chance in hell of succeeding. Kevin is “very out.”

Chris and Tiffany leave the Shark Tank without finding an investment for Cow Wow Cereal Milk, with the Sharks citing the milk carton as being a little too “empty” for children, and I frankly agree. We already have an issue with obesity.