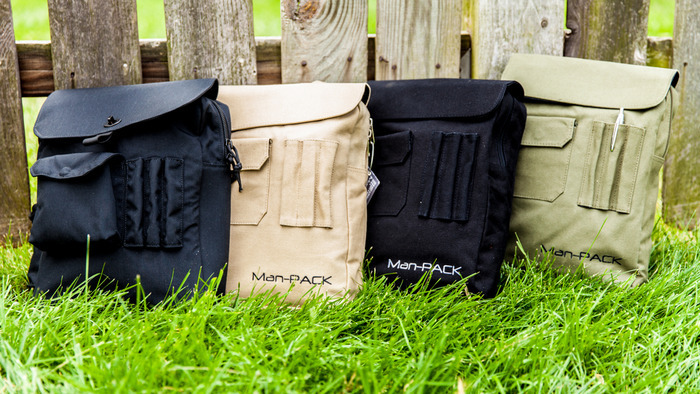 Aaron Tweedy has just entered the Shark Tank, and he is seeking a $200,000 investment in exchange for a 29% stake in his company, Man-Pack. The Man-Pack is a slim style and vertical messenger bag, designed by men for men. 40 years ago, men carried nothing more than a money clip, but times have changed – statistics show that the average male now carries around 4.5 pounds of stuff on them at any times, including things like keys, wallets, cell phones, and tablets. Guys need to carry stuff, too, but there are very few options – there’s the backpack, the briefcase, the occasional messenger bag (still uncomfortable most of the time), and of course, the fanny-pack.

However, Aaron has designed a new and superior product that can be worn three different ways. The first is the Bandolier style, which is the typical messenger bag-type where one strap is slung across your chest. However, if you need to remove the Man-Pack quickly, simply use the utility clasp to release the strap. There is also a pocket for your cellphone on the strap with a magnetic clasp, which will always close itself. There are three rows of storage on the outside of the bag, which can be sealed, as well as a collapsible beverage holder.

However, the most interesting thing about the Man-Pack is accessing the inside of the bag. To get to the insides, you don’t even have to remove the pack – just spin it around and unzip it. The inside also includes auxiliary pockets for stray things. The Man-Pack can also be appropriately slung over one shoulder, and it won’t slide or fall like some messenger bags do. The weight will still distribute over your lower back, thanks to the design of the strap. If you are sitting on a bus or a train, the bag can even be worn in front of you to avoid any potential theft or pickpockets. 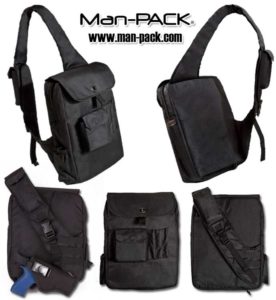 The mission statement of Man-Pack is, “Make men more prepared, because a prepared man is a better man.” With the help of the Sharks, the man-bag can transition into the man-pack. Robert immediately asks about Aaron’s background, detecting some military expertise or training at some point in his life. Aaron built his first house when he was 19, and was in Fort Benning, Georgia, at the age of 17.

Lori admits that when Aaron stepped into the Shark Tank, she was bored by the thought of another backpack for men, but she was wowed by the utility of the Man-Pack. Mark then asks to take a look, and Aaron distributes samples to each of the Sharks – and to Kevin, he specifically gives a black one to match the color of “Kevin’s soul.” Three of the Sharks immediately ask about sales, and Aaron explains that in the last year, he sold around 6,000 packs, and so far in the year, they are approaching 65,000 units (early enough in the year, no later than September.) The sales projection for the year 2014 is 145,000.

Each bag is sold for $59.95, and bags are made for $22.05 each. However, Kevin feels that differentiating the bag against anything else is a difficult task, which Aaron agrees with, but the consumer might need to be educated since the stylized and useful tactical bags aimed at men are still an emerging market. Mark jokes that the Man-Pack is a new version of the “murse,” or man purse. However, the Man-Pack isn’t a purse, or a backpack, but something else entirely – it’s a Man-Pack.

Robert says that in his experience overseas to Europe, he came across several similar bags and he wasn’t ashamed to wear the bag in public since almost every other guy wore the same type of bag. However, when he returned to the United States, he was deathly afraid of wearing the bag out in public because everyone would laugh at him since it was so different. Aaron then clarifies; the first point is to understand that the product he is creating is nothing like a “murse.” The people that Aaron sells to actually include military personnel, members of the CIA, and even security and police personnel. Robert concedes that he “never laughs at somebody with a gun.”

Mark moves the group’s focus back on track, and asks Aaron how many units he sold in the last month – but in the online store, only. Unfortunately, Man-Pack has only sold 40 units in the past month. However, Aaron started the company with only $5,000 and has been impressed at how much he has been able to do with so little money. Daymond then asks how Aaron came to the valuation of $700,000, and Aaron explains that there is $50,000 in the design patent alone. The Sharks ask for details on how he was able to patent the bag, and Aaron says that the look of the bag has been patented – none of the features are secured to Man-Pack exclusively. 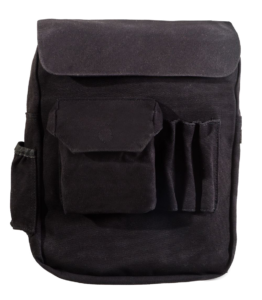 About $145,000 of the $700,000 estimate is the amount of sales over two years, and $18,000 has been into intellectual property – which, for Man-Pack, is a bank of YouTube commercials and other similar advertising ventures. Robert seems baffled that Aaron put a value on his commercials, but Aaron explains that all value is intrinsic and dependent on how that value generates more value – this gets a laugh out of Mark, who calls it a good answer. Aaron gives the example of a cheeseburger and bar of gold – it’s all dependent on the situation and who has what and who needs what. The final $200,000 of the $700,000 estimate is in goodwill.

However, if Kevin gave Aaron $200,000, he feels that he would need to own 266% of the company. Kevin cites Man-Pack’s small sales, and then confirms that he is exiting the deal and no longer interested. Unfortunately, Kevin is too disciplined with his money to invest in Man-Pack. Mark agrees with Kevin, calling Aaron a “great hustler” and a great salesperson, but ultimately, there is too much difficulty in scaling the business to a larger state. Mark is also out of the deal.

Daymond claims that they see many people with good and bad sales, and at this point they then bet on the person. They also look for small indications on how the person will serve as a partner, and Daymond then focuses on the Youtube commercials – by applying a value of $18,000 to the YouTube commercials, this shows that Aaron doesn’t have a sense of financial intelligence when it comes to what partners need and what is required to operate the business. Daymond is also out.

Robert admits that he was impressed with Aaron, but not the product – it just looks like a messenger bag. Robert is also out of the deal, citing the fact that he is aging and needs to find ways to make a return on his investment while he is still relatively young. This leaves Lori as the last Shark remaining.

Lori starts by saying that she doesn’t know exactly what men carry around, but with her experience throughout her years in QVC, she understands that there is a ton of competition for products like the Man-Pack. She is not sure how many people are going to buy the product, as there is nothing that differentiates the Man-Pack from other messenger bags. She bought into the person, but not the product, and thus, Lori exits the deal as the last and final Shark.

Aaron Tweedy does not find an investment for the Man-Pack in the Shark Tank.

Man-Pack underwent a Kickstarter back in 2015 in order to fund a redesign and retooling of the Man-Pack, and now the Man-Pack 2.0 has been created. The Classic 2.0 design has been made sleeker and more durable, and is now being rebranded from a man’s satchel into an “every day carry” bag, or an EDC. Since men typically carry the same things on them throughout the same tasks, the bag is still being advertised as helping men to stay more prepared. The price has stayed firm, and is available for $62.95 on Amazon or for $69.99 directly from the Man-Pack store. The Man-Packs have been refined, and now the more durable Classic 2.0 design is available for $69.95 while the classic “sling messenger bag” is available for $59.99. The products both have outstanding reviews, standing strongly at 4 to 4.5 stars each with 181 and 51 reviews. The Man-Pack 2.0 classic bag seems to be far more popular than the classic messenger bag counterpart.