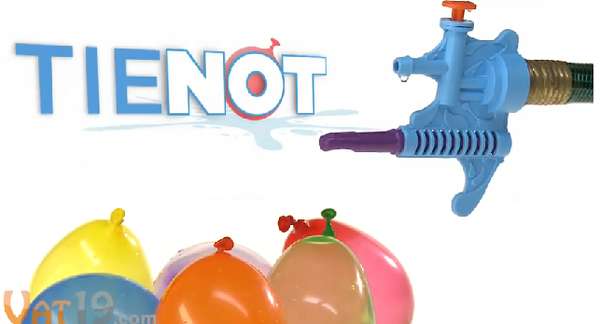 Wayne Sikorcin and Scott Smith are the minds behind Tie-Not, and have come to the Shark Tank in order to seek $125,000 in exchange for 10% equity in their company. Tie-Not was invented to cure an epidemic that occurs worldwide; every year, people suffer from sore fingers due to tying off knots for tiny water balloons. Scott and Wayne have two products to demonstrate today to the Sharks; the Tie-Not filler, and the Tie-Not tying stick. With one of these two items, anyone can fill and tie off water balloons in seconds; simply fill the water balloon with water, flip it around a little cylinder, and slip the balloon off the hose. In seconds, you have a water balloon that is entirely self-contained!

To keep the Sharks on their toes, Scott then tosses the filled water balloon to Mark, who surprisingly catches it. Wayne demonstrates the filler in better detail; simply attach the head to any hose, load the stick and balloon into their proper slots, press the orange piston after filling the water balloon, swing the balloon around, and slide the balloon off the top part of the hose. Kevin actually stands up before Wayne gives the example, and demands to do it himself – it goes without needing to mention that as a billionaire capitalist investor, Kevin is indeed able to fill a water balloon from a hose. Kevin tosses the balloon to Barb on his way back to his seat, much to the Shark’s amusement. 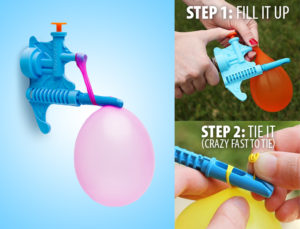 Scott asks for any questions while Wayne passes out examples of the packaging and of the actual products themselves, both the balloons and the sticks. The attractiveness of the Tie-Not brand is that in order to fill water balloons, a person doesn’t have to own both attachments – there is also the stick that uses the same technology, which fills up a cylinder where the head is then attached. Barb asks where the inspiration for Tie-Not came from, and Wayne explains that his wife tasked him with making 150 water balloons during a family picnic in 2008. He managed to fill about 15 while his children filled the rest of them, and while he was done worrying about filling up the water balloons, he wasn’t done worrying about the problem that he had just encountered.

Wayne began to sketch until one day, his daughter noticed that the design for one particular model looked like a stick, so she grabbed a stick, brought it in, and they tested the example upon a carved stick. Wayne was blown away that the balloon tied itself, and he began to do more research into patenting the idea and what the proper procedures were. After receiving the patents, Wayne invested in a mold, and in 2010 the products were launched officially. In the first year, Tie-Not sold $112,000. Each package sells for $4.98, and the cost to produce a package is $1.50.

Kevin asks why the Tie-Not package isn’t sold for $7.99, as he thinks that they can make a lot money. Scott says they started out at $9.99, but they then entered into a licensing agreement with a large packaging and producing company; they started receiving about 7 to 11% of the royalties, based on total units sold in a quarter. Kevin says that it’s a good thing that the two behind Tie-Not met him, as he says they received a horrible low-end deal. In the last year, Tie-Not grossed about $385,000, Wayne says, and the licensing deal is still in place. 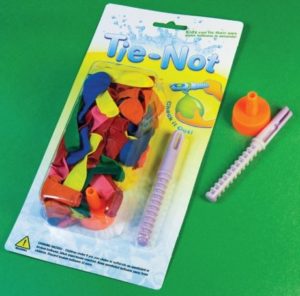 Kevin asks if there are escalators in the minimum percentage every year, which the two reply that there are not – Mark mentions that “they are such bad negotiators.” However, their contract renews yearly, as they did have the foresight to know to not lock into any deal long term. Kevin is immediately interested, and asks about the terms that the two have in order to exit their contracts. They have a 90 day option to buy out of their contract, or a 60 day “get out of jail free” clause – they can exit the deal with no hanging terms if they give a 60 day notice, but the company they licensed with will be allowed to keep all the inventory and sell it, but not produce any more Tie-Not units.

Kevin says that the cash flows Tie-Not is receiving from their main source, the licensing deal, does not justify the $1.25 million dollar evaluation that they gave upon entry into the Shark Tank. Tie-Not is being overvalued right now. The deal as it sits is not interesting to Kevin, so he has to “whet his beak.” Mark interrupts and calls Kevin a “toy maven,” but ultimately he is not a toy guy. Mark is the first Shark out of the deal. Simultaneously, Robert says that he loves the toy business and he loves toys that do two things – bring a smile to someone’s face, AND make money. While Tie-Not is cute and may bring a smile to peoples’ faces, as an investor, he just doesn’t see a lot of promise in the $1.25 million dollar evaluation. Robert is out as well.

However, Robert mentions that Tie-Not would be a perfect QVC product, but Lori thinks otherwise. Tie-Not is too inexpensive to make any noticeable money on the home shopping network, and she says that the $10 to $15 dollar range is absolutely perfect. However, the Tie-Not line of products are cute and she loves the idea, but the valuation isn’t there for her either. Lori is the third Shark out of the deal.

Scott asks what the Sharks would value the company at, and the Sharks immediately ask how much in sales were brought in for the last year, but Mark asks how much the two paid themselves in salary. Since they are still in the process of building a brand, they haven’t paid themselves any money yet, and they have actually brought in around $40,000 in gross profit. This seems low, and Kevin probes for details on where the rest of the money went. A lot of the money, Scott says, went to trade shows and other similar ventures. 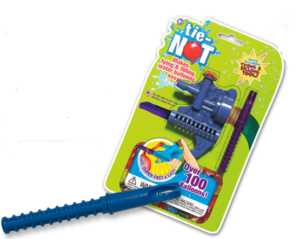 Kevin says that he has been in the business a long time, and he has seen similar companies with five times the amount of cash flow that they have, so the reality is Tie-Not is not worth $1.25 million. Kevin would have liked to see the deal before they found the licensing offer, but ultimately, Tie-Not is not big enough for Kevin to be interested. Kevin is more interested in profitable, low-risk ventures, and the passion just isn’t there for him. Kevin is out of the deal.

Barb is the last Shark remaining, and she starts by saying that she loves the product; she has probably blown up 5 million water balloons in her lifetime, as she is the “neighborhood mom to go to” for water balloons. Barb will make an offer, however; she offers the $125,000 Scott and Wayne asked for, but in exchange for 25% of the business. She reaffirms this by saying that the company isn’t worth the $1.25 million due to the crippling licensing deal. However, this $125,000 will come in the form of a $50,000 cash offer, and a $75,000 credit line that the pair can access any time.

However, Scott offers back the terms of 18% ownership, with a $50,000 cash offer and a $100,000 credit line, which Scott says will be able to move them into the next year. Since they will not be with the licensing deal, they need to find more capital in order to ensure that they can get their own inventory; Scott is smart for the average Shark Tank entrepreneur, as he understands the risk of cutting ties with a manufacturing deal that has cost Tie-Not very little money to get into but brings huge risks upon exit. However, Barb says she must stay firmly with her offer; the pair obviously know about the “Shark Tank effect,” as they must be aware of the popularity of the show.

Wayne offers back the same terms but for 20%, but Barb sticks with her offer – it is non-negotiable and locked in iron. Unfortunately, after some discussion, Wayne says they cannot offer the extra 5%, and they must stay with their valuation; there is no deal made, and Wayne and Scott of Tie-Not exit the Shark Tank without an investor.

While Tie-Nots still appear to be wildly popular, the product has received some lukewarm reviews on Amazon’s webpage. With 546 customer reviews, Tie-Not only has a 3.6 star rating, which is somewhat lackluster. Both the Tie-Not Nozzle and Knotter stick and the Tie-Not stick are available for purchase on Amazon for a cheap price of around $5.39, excluding Prime Eligibility for free shipping, but competitors have come out since Tie-Not’s appearance. These competitors include most of the same technology as Tie-Not, but are available at the same price yet inclusive of far more balloons than the typical 50 that are included with the Tie-Not purchase.

The state of Tie-Not is a curious one, as it appears there is enough inventory to keep the product and company afloat for some time. However, the webpage for Tie-Not is invalid and outdated, and I was unable to connect – I am not sure if this reflects on poor technological expertise by Tie-Not, or if it is indicative that Tie-Not has gone bankrupt and closed down as a failure.