Stepping into the Shark Tank is Mohamed Mohamed. Mohammad is from Oakland, California, and he is the founder, and CEO, of Linka. Mohamed is seeking an investment of $250,000 in exchange for a 10% equity stake in his company. Mohamed starts; when he’s had a long day at work, he can at least leave with a smile on his face knowing that he can dodge traffic on his bike ride home. Even then, riding a bike is therapeutic and healthy, so he can release some stress from the work day. But nothing would wipe that smile off his face quicker than if his bike had been stolen. This is actually the story of 1 million Americans each and every year.

Mohamed was fed up with bike theft and knew he had to do something about it, and this is where he came up with the idea of Linka. Linka always stays on your bike, so you are always ready to lock up. There is no key needed, and no bag required to carry everything around. When you are ready to lock up, tap the top of Linka, and a steel rod will slide into place, making it impossible to ride away. When you are ready to go, Linka will recognize you as you approach, and automatically unlock. Linka is not just smart hardware, but the companion application will also notify you about Linka’s battery life, and keep you up-to-date on the history of bike theft in your local area.

Linka will even recommend safer places to park, with instructions on how to get there (using Google Maps, of course.) Mohamed then drops a bomb; more than 2 bikes are stolen every single minute in the United States, and this will continue to get worse as more and more bicycles hit the streets. The need is there, and Linka has the answer. So which one of the Sharks is ready to lock in a deal with Linka and lock smarter, not harder?
Lori is the first Shark to speak up; what is there to stop someone from picking up the bike and putting it in their car? Mohamed invites Lori to step up and try herself, but Robert steps up and does it for her, joking that he is “the muscle.” Mohamed then points out that this is a great question, and Robert steps up to demonstrate. Robert takes a look at the bike and the Linka setup, noticing how the Linka simply hooks onto a basket. But, Robert is able to easily pick up the bike and take a few steps away, until the Linka device begins to beep loudly with an obnoxious tone. 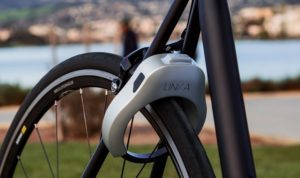 The user of the application would then receive a tamper alert, letting them know that somebody just attempted to steal their bike. Lori then asks about the lock, and Mohamed explains that the lock would keep the wheel in place. The lock works in such a way that it makes it very difficult to cut or tamper with, so only the person who installed Linka would know how to remove it. To punctuate Mohamed’s earlier point about receiving a “tamper alert,” a notification pops up on the demonstration screen that says, “Tamper Warning; Check your bike, it may be in danger!”
Robert points out that the benefit of chaining your bike to something hard is so that nobody can simply pick up the bike and run away. So, who cares if the Linka just sets off an alarm? Mohamed points out that the user cares, since they are the one ultimately receiving the alarm and notification. Mark then says that the crook cares since the crook is carrying something that is emitting an annoying tone, and they still have to work on getting the Linka off. Still, Robert points out that a chain or a physical lock is better, but Mohamed explains that they actually have a variant that includes a chain so the user can pick if they want an additional lock or not.

Mohamed points out the chain, explaining that the chain hooks onto a tire (either the front or back works) so that it cannot be ridden off. Robert points out that that actually works, and Mark asks how much the chain add on costs. Mohamed answers that the addon costs $129, and it only costs Linka $45 to make. Barbara then asks how much the entire cost of a Linka is, which Mohamed says is $159 which includes the chain. Kevin asks how many Linka units have been sold, and Mohamed explains that they launched a Kickstarter campaign back in May, which netted them 5 times the desired goal ($130,000 total). Sales since then have reached about $40,000.

Lori then asks about the background of Mohamed. Mohamed starts by saying that he did not attend a top-tier school or an ivy league school, but the community college of New York. Mark says that that college may be better than most of the other schools that Mohamed could have went to. Mohamed continues on, saying that he had the opportunity to finish his mechanical engineering degree there. Eventually, Mohamed went on to work as a manufacturing engineer for Toyota, so he has always had a heavy background in manufacturing and quality.

Mohamed also explains that he has a unique background and what brought him to the Shark Tank; his parents immigrated to the country to make his and his brother’s life a lot better. Originally, Mohamed and his family were from Egypt, and he feels honored that he has the type of parents that sacrificed so much to give to his brother and him. His family left everything to bring their family here, so Mohamed is doing everything he can to pay them back. 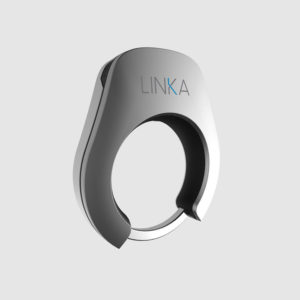 Returning to the business at hand, Robert asks how the Linka works as the user is coming out. The Linka automatically recognizes the user when they enter the proximity using BTLE, or Bluetooth Low Energy. Barb then points out that she is a perfect customer, as she rides her bike every morning, but there is something psychological about putting the chain and lock around the post. It makes her feel good and safe, so when you do not have anything that looks like a deterrent to a thief, especially in a big city like New York, this says “come and take it.” There is not enough of a deterrent for a practical application for Barbara, so she is the first Shark out of the deal.

Robert agrees with Barbara; in larger cities, you are looking for a deterrent, such as a heavy chain when a guy walks by. The heavy chain serves as a visual deterrent as well, and it is a very quick thing. But Mohamed says he is actually working on the answer for this on this upcoming Tuesday, as he intends to take a trip to Amsterdam to meet with the distributors there. There are a number of distributors and producers there, and Amsterdam has a ratio of 1 bike rider to 1 bike. Robert then says that he himself took a trip to Amsterdam a long time ago, and he called into the police and asked about the best alarm system he could buy. The police officer said, a dog would be the best bet, as a dog would make the burglar think twice, and Robert feels that a chain is the same way. Robert is also out of the deal.

Kevin then says that as Robert was making off with the bike, as an example, he was hoping that the Linka would send out a shock of 240 volts to hit him and cause him to drop the bike. But unfortunately, that did not happen, and Kevin points out that they say the “better mouse trap” phrase all the time on Shark Tank (“if you build a better mousetrap, the world will come to your door”). But even then, there is an extremely saturated market out there. Kevin then points out the $2.5 million evaluation, and then says that he is not excited about the product so he is not excited about the valuation. In fact, Kevin finds the valuation about 50% too high, and estimates that he would have been far more comfortable with a $1 to $1.2 million valuation. Kevin is the third Shark out of the deal.

Lori speaks next, saying that she likes the invention and thinks it is clever, but she feels that it has to be a much louder alarm. Lori herself is a city girl, and the volume of the alarm was not noticeable; in a city setting, it would have been purely white noise and hard to notice. While Lori likes the product and likes Mohamed, she is ultimately out of the deal, leaving just Mark Cuban remaining. However, Mohamed explains that they did the research of talking to 300 different customers, but then Mark speaks.

Mark starts by saying that none of the Sharks doubt Mohamed’s preparation and quality of the product, but the issue is the competition. By trying to build “a better mouse trap,” Mohamed has entered a brutally competitive market – this is why he has to go to Amsterdam. If it was such an easy sale, Mohamed would have his hands full, but ultimately, he has come to the Shark Tank. So, Mark is the final Shark out of the deal, which leaves Mohamed without an investment in Linka.

Linka Now in 2018- The After Shark Tank Update

Linka is one of the few products that might not have even needed to appear on Shark Tank, but still benefits from appearing, nevertheless. Now, Linka is available from the website (linkalock.com) for the price of $129, and is available in either a matte black color, or a silver/black color. The optional chain is available to add on for the price of an extra $40. The Linka will require 3 to 4 weeks to ship, which can show a bottleneck in the production and manufacturing of the product. Linka is also now said to be much more everlasting than its Shark Tank appearance, with a single charge lasting an estimated 9 months.

Linka is also said to fit around 85% of bikes – not all bikes will work, but fortunately, Linka does have a handy guide available that will explain how Linka fits to each bike and how to be installed. Since the advent of the Linka and the appearance of Shark Tank, the only major feature to be added to the Linka was the phone-less access function, which will allow for a user to enter in a customized 4-digit access code on Linka and then eventually ride away without an issue.