Stepping into the Shark Tank is an entrepreneur from Lovett, Texas. Shawn Genenbacher owns the company Lite-Netics, and Shawn has come to the Shark Tank to seek an investment of $125,000 in exchange for a 20% equity in his business. Everyone loves the festive atmosphere of the holidays – all the food, all the family, but the biggest thing is the decorations and the lighting, by far. There’s just one problem; nothing can ruin the holiday spirit quicker than a tangled mess of holiday light strands. The clips, tabs, glues and screws can quickly complicate your collection of holiday decor.

Fortunately, it doesn’t need to be so complicated anymore. Introducing the Lite-netics, and to showcase the full extent of what Lite-netics are and what they look like, Shawn pulls back a barrier that was hiding the display of Lite-Netics. Lite-netics are magnetic light strands, and the first, and only, light strands to feature a magnetic base at the start of each and every socket. This allows for the quickest, and easiest, attachment of any strands available. A decorating job that once took hours to complete can now be done in just minutes.

To demonstrate, Shawn pulls out a strand of Lite-Netics lights and begins to set them up on the display stand just behind him, plopping each light strand down with an audible thump. The Sharks watch intently, and very quickly, the light strands are set up and ready to display some festive cheer. Just like that, Shawn says, you have a festive display. No more venturing up ladders, and far more time to sit around in the comfort of your own home and sip some eggnog. So, which one of the Sharks are eager to team up with Shawn to light up the world?

Lori asks the first technical question; do the magnetic bases attach to aluminum? Shawn confirms that the magnets do not attach to the aluminum base, and Lori wonders out loud how many homes have a magnetic frame. Shawn, however, feels as though that there will be no problem with people buying the product, it just depends on where you are in the world. Lori is then curious how many people actually know if they have metal strong enough to support Lite-Netics or not. Robert agrees with her, but Shawn disagrees on a core principle; Lite-Netics are not just for the commercial side. 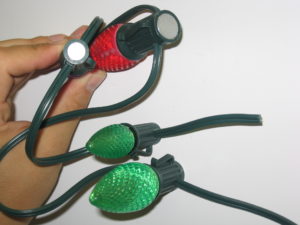 Lite-Netics can be used in the commercial side as well, but in the residential side, you can see a lot of metal depending on your gutter. Despite this, Robert asks to put that aside and asks how many units of Lite-Netics have been sold in the past year, focusing instead on the concrete success of the product. Shawn explains that so far, he has been targeting the professional installers and commercial carriers of Christmas products, rather than focusing on individual stores and people. He confirms that he has worked on getting Lite-Netics into different stores, and upon Kevin’s request, Shawn explains that he has buyers who are looking to get the product into Home Depot.
Kevin is impressed with this, and Shawn continues; they like the product and have actually taken the product to their factories to bump up production and try and get the cost per unit down to make much more profit. The retail market, however, is the market that Shawn has trouble getting into. Still, Shawn has not answered Robert’s question of sales, but Shawn says that in the past 12 months, he has sold $118,000 worth of Lite-Netics. This made a $38,000 profit, and Lite-Netics has been in sale for a little over four years. Daymond asks for some more details, and Shawn explains that in their four years of operation, they have made just over $400,000 in the lifetime.

This is about the same, Mark points out, and this means that the operation of selling Lite-Netics is not scaling. Shawn confirms that he is having trouble with the production side of things and is having trouble getting the cost per unit down, but when he first started the product and received the patent, he pursued it vigorously. Kevin is shocked that the patent has cleared for Lite-Netics, and this means that Shawn has done his homework quite thoroughly.

Still, Lori points out that her biggest problem that she has is that magnets are actually very expensive. If she tried to make a similar product herself, and she has made products with magnets, you cannot get the price down after a certain point due to the inclusion of magnets. Robert then takes the example of a 50 foot strand, asking how much that strand would cost at Home Depot. Shawn guesses around $20. Robert then asks how much would a 50 foot strand of Lite-Netics cost, and Shawn estimates around $70 – an increase of more than 300%. This is what it is currently, but Shawn is focusing on getting this price down to compete with the cheaper light strands.

Robert then explains that there are two problems – there is more than a 100% difference, is the first one. If there was a difference of maybe $5 or $10, that would actually sell some product, but Robert questions if Lite-Netics is still even in the business of equalling their price, or would that be an impossible task. Shawn, however, feels that if you are building on a specific type of building, this requires some additional accessories such as clips and tabs and staples, which is more of a hassle. Still, Lori admits that they are a plastic piece of equipment so they are very cheap to invest in. 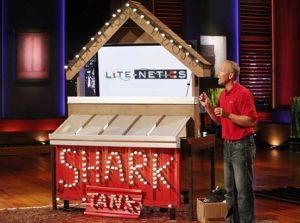 Kevin then asks about the viability of taking the patent, and explaining that Lite-Netics is at a cost disadvantage because of the small scale, to larger corporations that can easily scale up the operations and license out the patent. The technique is patented so Shawn does not have to run the risk of getting ripped off, so Kevin is curious why Shawn has not gone off to find his own licensing agreement. Shawn says that he has not received an opportunity to license the product yet, but Daymond asks if he has picked up the phone and called anybody. Shawn says that so far, he has not.

Kevin then says that this is one of his deals where he feels bad about the offer, but he intends to make one eventually. Kevin prefaces his offer by saying that he has the knowledge of how to contact the larger players of the market, so he will negotiate the deal with them. Shawn has the right to override Kevin if he does not like the deal, but Kevin intends to pay Shawn $125,000 for the right to license out Lite-Netics. Kevin can get a massive advance on the licensing deal, but in the end, him and Shawn will be 50/50 partners; Kevin is offering to take a licensing deal and buy out 50% of the equity for $125,000. Shawn thinks about the offer for a moment, then asks for any other potential offers on the table.

Robert speaks up next, saying that he believes Shawn has a massive problem. At a $50 price difference, there is no potential residential market, so Robert is questioning if Shawn is making the right path to continue to focus on the resident market. Still, Robert is out of the deal, finding that it is not worth his time. The Shark Tank is quiet for a moment, but then Mark speaks next. The biggest cost and hassle for a professional installer of lights, Mark explains, is their time; to be able to say that your time is worth $50 or $100 and Lite-Netics can save you 3 or 4 hours an install is the proper way to market Lite-Netics. But still, Mark does not feel like he knows how to reach the professional installers, so Mark is also out of the deal.

Just two Sharks remain to offer any deals. Lori speaks next, explaining that there are three problems as she sees it; number one is the cost is far too high. Lori does not have faith that the price will ever be able to be manufactured at an apples-to-apples comparison, where each product will cost the exact same. This is due to the magnetic nature of the lights. The second problem is that she does not know how many places the lite-netics will work since you need a magnetic surface, but a lot of homes have aluminum. The third problem is that there is also a large bulb, which is like the “old-fashioned” light bulb. A lot of people today are buying icicle lights and smaller bulbs, so Lori just does not feel that the product will work in the retail market. Lori is out of the deal.

Daymond is the final Shark to speak, and he agrees with Kevin that the only opportunity is in licensing out the patent for use. Daymond makes the exact same deal as Kevin but shaves a little off, offering $125,000 in exchange for 40% of the income from a licensing deal. Kevin complains about Daymond copying his deal and wonders where the creativity in the Shark Tank is, then gives an example of bringing a previous guitar product into Fender Guitars. Kevin then estimates the deal will take him 9 months to complete.

In the end, Shawn declines both of the licensing offers, saying that he intends to continue on and he has some opportunities with other big wholesalers and distributors available.

Lite-Netics Now in 2018- The After Shark Tank Update

Shawn seriously shot himself in the foot here, as both Daymond and Kevin were seriously willing to do the work for him after all he had to do was receive the patent.

With that said, Lite-Netics has now worked to invent itself without the need for a licensing deal. Now, Lite-Netics has a large online store which consists of a variety of products and accessories, which is rather unfortunate. Lite-Netics products are now for either C7 or C9 sockets, with the C7 spool costing $22 while the C9 spool runs from a range of $25 to $405, depending on your needs. Lite-netics custom cuts their spools and builds customized lengths of strand for the customer, and all of this can be purchased through only the online store on the Lite-Netics website. In addition to the C7 and C9 strands of lights, a customer can also purchase any replacement plugs or accessories for their Lite-Netics products, as well.

Unfortunately, it is my opinion that these products are rather expensive when compared to traditional lights from a local dollar store, and I do not feel as though Lite-Netics will be around for much longer.