The Skinny Mirror Update – What Happened After Shark Tank 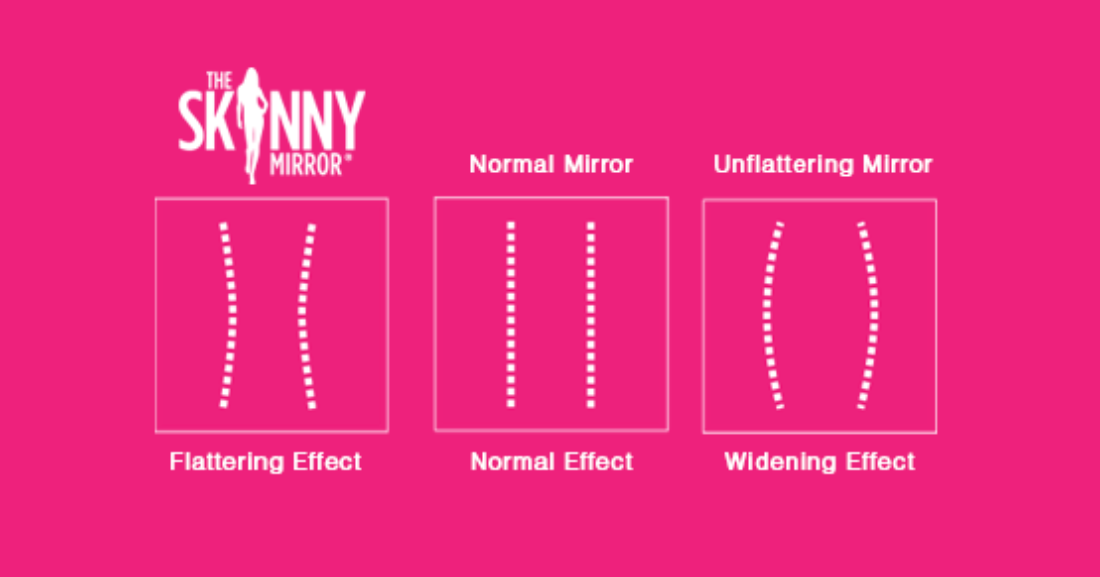 The Skinny Mirror Before Shark Tank

Belinda Jasmine, from Sand City, California, has just come to the Shark Tank. Belinda’s company is The Skinny Mirror, and she has come seeking an investment of $200,000 in exchange for a 20% equity stake in her company. The Skinny Mirror, Belinda begins, sets a revolutionary new standard that will enable a user to see their true self. When was the last time you looked in a mirror, grabbed at your stomach and said, “I need to lose a few pounds?” Whether we admit it or not, almost everyone can relate, but what we often forget is that how we feel about ourselves often affects others’ image.

The Skinny Mirror On Shark Tank

The Skinny Mirror offers a subtle, believable slimming reflection designed to help you feel good about your body. We’ve all heard that cliche phrase – if you look good, you feel good. But also realize it’s the other way around; if you feel good, you look good! When you look in the mirror every day and like what you see, it gives you the inspiration to look and feel your best. So, which one of the Sharks will step up and actually test out The Skinny Mirror? Both Lori and Daymond jump up at a chance to test out the mirror, and Daymond allows for Lori to step up first.

Lori steps up to the demonstration area and immediately says that she likes the mirror. She does look far skinnier, she admits, and even Robert points out that her head got smaller. Daymond also steps up, takes a look right in the mirror, and simply says “wow.” The Skinny Mirror clearly works with all of the Sharks, and Mark jokes that all Daymond will have to carry that mirror around everywhere with him.

Robert then points out something that is rather subtle; on Lori, the mirror is not that noticeable, but on Daymond, the mirror makes a huge difference. Belinda explains that the ideal place to stand is 3 to 5 feet away from the mirror, and Robert interrupts and jokes that a lot of women say that the farther back Daymond is, the better he looks. Daymond re-seats himself with a cheeky grin on his face, but Kevin focuses on the business at hand; the mirror actually promotes a falsehood. The real motivation to slim down is to look at reality and finally come to understand that losing weight is indeed hard work. 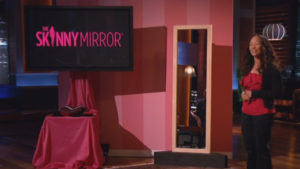 When you see the results, the real results, Kevin explains, you are very motivated to maintain it. This, however, is a lie to somebody – the show cuts to an excellent angle of an interested Mark Cuban leaning forward in the mirror, although his skewed and shrunken proportions make him look rather comical. Belinda then asks Mark, when he rolled out of bed this morning, is that what he looked like? Mark just says, pretty much. Robert then focuses on the sales of the product, not debating whether the ethics behind it are good or bad.

Belinda estimates that she has sold about 350 units of The Skinny Mirror, all for a total of $85,000. These have all been to clothing stores and hotels, so this is not aimed towards consumers. Kevin then points this out and explains that the entire premise of the business model is to sell it to retailers who will then sell dresses on the false premise of appearing better. Basically, Belinda is putting a mirror in a retailer for a “Reuben-esque” woman to put on a dress, and all of a sudden flatter herself by the falsehoods being portrayed. The woman then gets home and puts it on, Mark agrees.

However, Belinda explains that they actually had a test market study done in Sweden of last year. The findings that came out of the survey proved a few things; the first one is that women who used The Skinny Mirror bought around 20% more clothes. But Mark says, of course they did. The second thing is that women were more satisfied with their actual bodies, as compared to the ideal body portrayed in advertising. With the help of The Skinny Mirror, the gap between women finding their actual bodies close to their ideal bodies was far smaller. Kevin and Robert look at each other and say that this is the problem with the product, but Belinda points out that she has a fourth thing to say.

The fourth thing, Belinda says, is that women believe they are 2 to 3 sizes larger in the mirror than they actually are in real life. Belinda herself took the survey and believed she was 2 to 3 sizes larger. But Robert asks about the ethics of the stores – do some stores not tell customers and some do, or do all stores tell their customers that it is a special mirror? Belinda then explains that they have had big name retailers for a quote and also ask her to remove the logo on the bottom right corner of the mirror, which reads “Skinny.” This would have been a $700,000 order, but Belinda explained that when she started the company, she did not want to use the product for deception. So, she declined the order.

Kevin then asks if the person has to find a logo to determine if they are in a skinny mirror or not, but Belinda argues that the logo is highly visible and all you have to do is notice it. Kevin thinks for a moment, but Belinda steps back to retrieve her consumer model. The consumer model retails for $165, she explains, but Kevin then points out that Belinda does not have a patent on the technology – anyone can order that piece of glass and make their own mirror. Belinda acquises this, but says that the intention and branding of the product is what matters most.

Kevin then is blown away by Belinda valuing her brand at $1 million, but Belinda says that she sees the potential; she invites Kevin to take a look at himself in the mirror again, which gets a laugh out of Robert. Kevin says no, but then says that he will not be part of the sham – Belinda can smile all she wants but the reality is that she is ultimately deceiving the people she is trying to appeal to. Kevin then exits the deal, and says that he forbids any of the other Sharks from making an investment in the product. Of course, this gets a laugh from all of the Sharks, but things continue on.

Belinda then explains the phrase, “the camera adds ten pounds.” When you look at a mirror, you are looking at a flat, 2-dimensional surface, which is the same thing as a camera. On a flat surface, you are flattened and stretched out, but we are three-dimensional human beings with curves and quirks. Kevin interrupts her and begs her to tell the truth, but Mark interrupts. When you look at a mirror and like what you see, you feel better, but that mirror is ultimately being used as a vehicle to conclude the purchase of another item. The challenge is for the brand, whoever is using The Skinny Mirror, to overcome the potential realization of a shopper seeing that they do not look the same in the store. This brand suffers, and in terms of an investment, this is not the type of uncertainty that Mark likes in his investments. Mark is out, as well.

Robert does not think that there is anything wrong with the product, as women, and men, love anything that makes them feel better, much like fake hair and makeup. Where the product really falls apart, however, is the potential of a customer looking in the mirror and taking the outfit home and obviously looking bad or different, they are not going to be happy. This is the same thing that Mark is saying, but Belinda’s response is, “what if they have a skinny mirror at home?” Robert mulls over this for a moment, but then admits that he has some issues with it that cannot be resolved. Robert is the third Shark out of the deal.

Lori and Daymond are both left, and Lori asks why Belinda came up with the product. Belinda explains that she had a “fat mirror” and had no idea that it was adding 10 pounds to her reflection. It began to add to her body insecurities, and she is very active; she is a surfer and a skater, and she eats healthy and has never really had body issues. So one day her friend came over and mentioned that the mirror adds ten pounds, and the light went off – how could the mirror affect how Belinda feels about her body if she is such a health advocate?

Daymond then agrees ultimately that it is dangerous, since people are always trying to not be who they actually are in order to fuel their unhealthy lifestyles. Daymond cannot get behind that, so he is also out of the deal, leaving just Lori in the deal. Lori starts by saying that most women want to be thinner that they are, and always feel that they look heavier, but there is a difference between being in a retail place and having a deceptive mirror to use as a vehicle for a purchase and having one at home. The ethics of it are not there, so Lori is the final Shark out of the deal.

Unfortunately, Belinda does not find an investment in The Skinny Mirror.

The Skinny Mirror Now in 2018- The After Shark Tank Update

Very, very rarely is there ever a moment on Shark Tank where a potential entrepreneur can learn a lot about how to run their business. But, there is enough of a lesson here for me to squeeze in a personal anecdote; always think about what your product will be used for, and if it can be a vehicle for someone else to push their own product or agenda.

With that said, The Skinny Mirror still appears to be continuing on in a rather lackadaisical fashion. Either more retailers have come to the idea of using the product to sell their products, or there has been a massive uprising in the demand for a more flattering mirror, as The Skinny Mirror is currently not accepting any more orders while they set up a new manufacturer, presumably to deal with the large amounts of demand. The Skinny Mirror has worked to involve itself in changing how women view their bodies, and hopes to bring a more profound “feel-good” effect to women; now, The Skinny Mirror has a “Pink Band” campaign to empower women that all women are beautiful.

From what I was able to find, Skinny Mirrors start at the price of $295, but only for retail orders/orders in bulk.