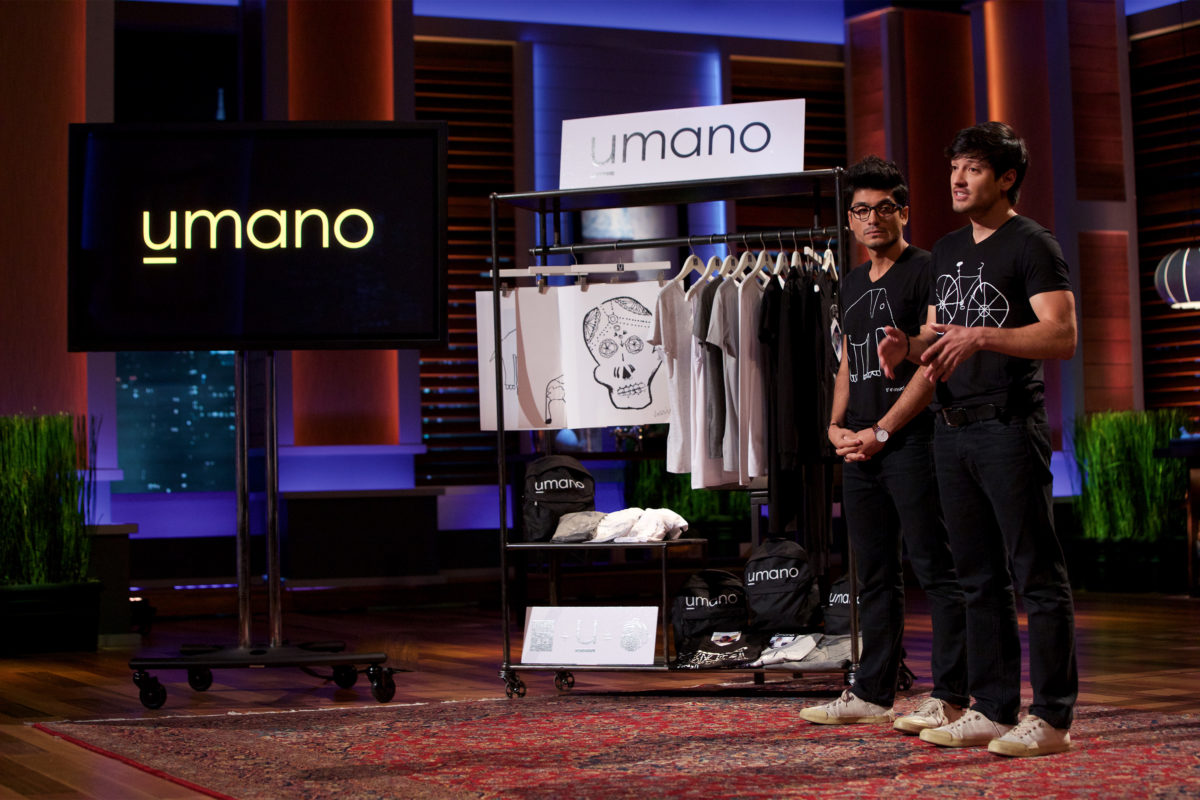 Brothers Jonathan and Alex Torrey had the innovative idea to partner with child artists, and design their own t-shirt company. They moved back in with their parents, and decided to make it work. Alex even got six months probation for violating a Georgia law that states you are unable to screen print in your house. Would they get the deal with the Sharks that they needed to expand their inventory? Let’s take a look. 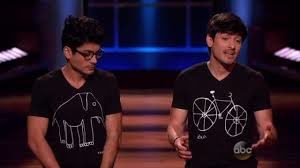 In their introduction video, Jonathan and Alex Torrey informed the Sharks that they were from Athens, Georgia. They continued, saying that they were from a super tight-knit Mexican family as the video showed them sitting down to dinner with their parents. Alex inform the audience that they had a clothing business called Umano and that the whole family pitches in. The video cut to them folding clothing in a factory. Alex stated that their goal was not just to have a successful fashion brand, but they also wanted to make a positive social impact. The video ended, and the two men walked out on stage wearing t-shirts that they designed. Jonathan greeted the Sharks, and introduced himself as well as his brother Alex. . Jonathan told the Sharks that they were seeking $150,000 in exchange for 15% equity in their company, Umano. Alex describe to their company as fashion for good. Umano had both men’s and women’s fashion lines with, is Jonathan put it, personalized meaning. The used artwork from up-and-coming artists in the design of their t-shirts, these artists were all children. They showed a picture of one of their young artist named Jessica. Just go through the skull, and apparently she wants to be a teacher. Mark asked how old Jessica was, and Jonathan informed him that she is 7. Mark smiled. Alex continued, the saying that for every t-shirt that a customer purchases , Umano will give a backpack full of school supplies to disadvantaged kids. He said that choosing a mono means that you don’t have to decide between doing well, and doing good. He asked the Sharks who wanted to invest in the company. On the screen, they showcase two more Young artist who drew an elephant and a bicycle which were the shirts that they were wearing on the Shark Tank.

Alex told the Sharks that they brought some designs for them today, and started to hand out the shirts. Lori said that the shirt was nice, and that the fabric felt soft. Alex told her that they literally traveled the world to get that fabric. Well he held up his shirt, Robert ask them how much each shirt was and what the methods of sale were. Alex told Robert the T-shirt was $48, and they sold the shirts at Bloomingdale’s. Bloomingdale’s is a very ritzy store, so that is pretty impressive. Alex continued, saying that they also sold the shirts at other specialty stores, as well as on their website. Kevin wanted to know if the child’s picture who designs the T-shirt was showcased at the specialty stores. Jonathan said that well there wasn’t a large display, each shirt contained a hang tag with the child story. Daymond wanted to know if the child or their parents get a royalty for each t-shirt that is sold. Alex said that the way the company is currently structured, they give backpacks full of supplies to the partner schools. they then collect the drawings, and take them back to their facility in order to create the artwork for the t-shirts. They don’t currently pay the children or their parents.

Kevin wanted to know if Umano was a business, or a charity. Alex told him that they were 100% of business. Kevin clarified, asking them if they were 100% of for-profit company. Alex told him that they had a concept of social entrepreneurship. Mark chimed in saying that the world has changed in the last 5 years. He said that most people don’t just walk into a store to buy a product, they walk in to buy a cause. Kevin interrupted, saying that they needed to make a profit in order to be sustainable. Mark insisted that the two go hand in hand. Alex told both of them that they have the margins to do both. Robert wanted to know how much the t-shirt cost them, if they were selling it for $48. Jonathan told him that the cost of the product was $7, and the backpack that they give back to the students is $4. So the total cost for each t-shirt is $11.

Daymond asked where the schools were. He wanted to know if they were in countries of need. Alex told him that they had schools everywhere. He continued stating that they had partner schools in Mexico Peru and Haiti as well as in America. Robert asked what their sales were like last year. Jonathan told him that they sold $106,000 worth of t-shirts last year. He continued, stating that there sales productions for the current year are $250,000. Daymond wanted to know how they were able to get into Bloomingdale’s, since it is challenging for a startup entrepreneur. Alex told him that they got in because of the story behind their company. Not only were they in Bloomingdale’s, but they were in very common and popular locations of the store.

Daymond asked if they had any inventory currently, and Jonathan told them that they did. Daymond wanted to know how much, and Jonathan told him to 8000 units. Alex continued, stating that the 8000 units what they had were already sold. Daymond asked if they planned to be just a t-shirt company, or if they plan to expand their align. Alex said that they wanted to be a Lifestyle brand. Alex showed them a preview of their spring 16 line, on a projector. It contained elements such as dresses, leggings, as well as what looks like a hoodie or jacket. Kevin posed a hypothetical situation in which they got 10 million + sales. He asked them if it would be a problem down the line with them not giving the children any royalty from the t-shirt designs. Kevin said that could be construed as child labor. Robert told him that that was a bit of a stretch.

Alex looks shocked for a minute but recovered quickly. He informed the Sharks that larger companies would not be able to go in and do what they’re doing because their company is a Grassroots movement. Robert wanted to know why it bigger company wouldn’t be able to go in and copy the idea. Mark pointed out that a larger company would be under greater microscope. And Alex told him that he was right. Alex told them that it was an important point to make that as Umano gross, they will grow the giving. Robert told them that he thought the designs were beautiful and he likes the cause. He continued, stating that he agreed with them that people need to know the story behind what they’re buying. People don’t just buy products. After the compliments, Robert Lee down the truth. He told the two entrepreneurs the design businesses were like restaurants, it was a really tough business and they’re hot today and not tomorrow. Robert went out stating that there’s too much risk involved in an investment.

The two entrepreneurs think him and continue with their presentation. Alex and form the remaining Sharks that they were really targeting the millennial Market. He let them know that he’d done his research by telling the Sharks that Millennials worst will surpass Baby Boomers in terms of purchasing power by 2018. Kevin let them know the Sharks of seeing a lot of t-shirts come through the Shark Tank and while they had a creative message, they did differentiate themselves. Said that it was too early for him to get involved and he went out.

Jonathan wanted to know what was holding the remaining Sharks back. Daymond asked to where the 8000 units an inventory they had we’re going if they were already sold. Jonathan let him know that those 8000 units would be going towards Bloomingdale’s to fill the orders until Christmas. Mark wanted to know if they had the money to go out and source additional inventory and Jonathan told him that they did not. Alex said that Bloomingdale’s was asking to put their shirts and more stores, but they did not have the inventory to do so.

Lori stated she wanted 25% equity stake in Umano in exchange for their ask of $150,000. Jonathan and Alex pause to consider. Lori continued letting them know that they really were just starting, and there’s a lot more work to do as far as sourcing and getting more stores. Lori said that she thought she could really be an asset to their business. Alex think her, it said that there are still two more Sharks in the running, and he wanted to find out who else might be interested.

Daymond was up next. he made an offer for $150,000 and exchange one third of the business, citing his experience as the reason for needing more equity. Mark said that he really loved the brand as well as what they were doing with the kids. He asserted that they did not need help getting sales, but a line of credit to get their inventory and order in order to fill more orders and grow. Mark made an offer for the hundred and $50,000 in exchange for 20% of the business, which was lower than all of the other Sharks that made offers. Said that he would be happy to work with Lori or Daymond on the business but he was also happy to do it by himself. Lori stated that she would also go in with him. Mark asked Daymond if he wanted to join in, and Daymond said that he doesnt want non-clothing people in on his deal. Kevin stated that this was very interesting , since the two Sharks Lori and Mark were asking for Less equity then Daymond was. Alex picked Mark and Lori, stating that they need to protect the businesses equity for the future, even though Daymond had excellent experience. As the Sharks hugged their entrepreneurs, Daymond told them that he was keeping the shirt.

Umano Now in 2018 – The After Shark Tank Update 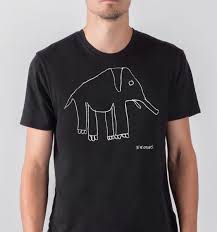 Since getting a deal with Mark Cuban, the brothers behind Umano have expanded their product line to include women’s shirts. They also started a new partnership in August 2016 with a few refugee relief organizations in Georgia and Tennessee. This opened them up to working with refugee children from all over the world. It looks like these guys are really going places!