Stepping into the Shark Tank is Gary DeJohn, who has started his business for wine enthusiasts. Gary says he will be the Shark’s server tonight, and then mentions how tired he is of saying that. Gary then says that he has developed a product that will revolutionize the way wine is served worldwide. Gary is seeking an investment of $75,000 for an exchange of 30% equity in his business, Vinamor.

Wine is a living organism, Gary says; when a winemaker bottles a wine, he essentially puts it to sleep, and the wine must be woken up before tasting. People are constantly let down by the bitter flavor and acidity of red wine, so they turn to this – a traditional wine decanter. Take the entire contents of a bottle, pour it in the top – which makes a mess – but then the hard part is waiting about an hour. Gary’s product does this in just seconds. 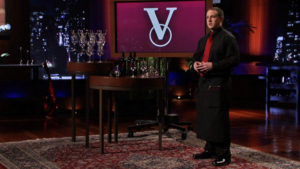 So, how does Vinamor instantly give wine its full-bodied flavor? Well, Vinamor simply sits in the top of any wineglass; as you pour the wine, wine travels down the path until it hits a ball, which exposes every angle of the wine to the air. This gives it the most amount of surface area possible, and allows the wine to breathe; every glass of wine at home, or at restaurants, should be poured through Vinamor to get the taste just right. With the $75,000 investment, Gary will be able to manufacture Vinamor on a much grander scale, and will be able to kickstart his marketing campaign to get Vinamor in every house, liquor store, and bar in the world.
Of course, Gary immediately calls Kevin to step up and test the tastes of a few wines. Kevin is the most official wine connoisseur out of the Sharks. Gary pours a glass of wine in a wine glass without the Vinamor, and pours a glass using the Vinamor. Kevin takes a sip of each glass, and simply explains that it works. He reaches down to grab the aerated glass of wine, saying that he’ll keep this. But then Kevin asks Gary if there are any other aerators on the market, which Gary confirms there are.

Of course there is, Kevin says; he owns them all. Obviously he does not own Vinamor, but it is unique, although it is far more delicate than other aerators because it is made out of glass. However, Gary feels that they can make it out of a nice acrylic to make it more durable. Kevin asks for the difference between the Vinamor and other aerators, as they all aerate wine successfully. The other Aerators, Gary explains, cannot measure a glass of wine – Kevin is confused by this, but Gary explains that the servers are told to simply pour onto the ball at the bottom of the Vinamor. 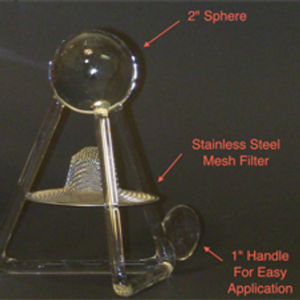 Theoretically, this would save some over-pouring and under-pouring costs in order to squeeze out every last bit of profit from a bottle of wine. Mark asks to view the Vinamor, then admits that it is a clever little device – Gary then passes out samples to each of the Sharks. Kevin asks if Gary sees the product going into every bar or restaurant that has a cellar, which are typically higher class places, but Gary says that he does not want to limit it. Instead, the Vinamor can be branded – take Olive Garden, for example. Sell them as a retail item through the restaurant.

Robert asks if Gary has any sales, but Gary reveals that he has only sold around 1,000 units of the Vinamor. Barbara asks about his sales medium, which Gary says is directly to consumer – he actually works in a restaurant, which is where the idea came from. Every one of his tables that drinks wine takes one home, and each one sells for $40. The Vinamor only costs $20 to make, which Kevin points out is way too high. With the investment from the Sharks, Gary will be able to take his product overseas and start making greater profits due to cheaper production.

Robert explains that all he knows, and cares, about wine would not even fit into one of Gary’s wine glasses. So, he is the first Shark to exit. Kevin then refocuses on the deal and asks what is Gary’s marketing strategy to bring the Vinamor to market. Gary explains that the broad scope of things is to bring his product to any, and all, restaurants that sell wine, and from there, they have free sales people in the restaurant. Kevin points out that restaurants do not sell wine apparel, but Gary replies, “yet.’

Barbara points out the complexity of the design of the Vinamor, then asks who designed it. Gary explains that he designed it, and knows a statistic that can prove very helpful; if you are at a restaurant and finish your first glass of wine prior to your meal arriving, you are 78% more likely to order a second glass of wine. Now, this increases sales at every single table that is drinking wine. Daymond then says he knows nothing about the market, so he will not be of any help to the business. Daymond is the second Shark out. 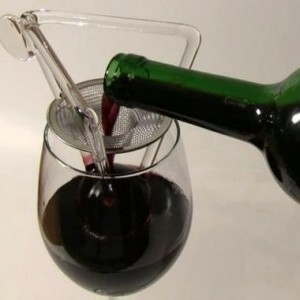 Mark says that he “hates to join the chorus,” but Mark explains that he has a rule – do not trust any bottle of wine that costs $5. Still, Gary invites Mark to try out the Vinamor on one of his bottles of wine, which would make it taste like a $10 bottle of wine. Still, Mark says that he is a beer drinker and not a wine drinker, so Mark would also not be of help; he is out of the deal, as well. Three Sharks are out of the deal, and only Kevin and Barb remain.

Barb feels that there is a market for the product, but ultimately, it is not something that she wants to tie her money up in. Barb is out of the deal as well, leaving only Kevin as the sole Shark remaining. Kevin starts by saying that he understands the product works, although it is not unique. The only way to make the product work would be to license it, and that is not a process that Kevin wants to undertake. Kevin is the final Shark out of the deal.

Still, Kevin points out that the measurement of a glass of wine is a fantastic idea, but the reality is a $70,000 investment at 30% does not interest him. Instead, Kevin likes to go out and make money so that way he can go out and buy $2,000 bottles of wine to enjoy, and he drinks the whole thing through a straw.

Gary reneges and offers the same deal for 45%, but Kevin stays firm in not re-entering the deal. Gary looks to the other Sharks, looking primarily to Mark since he is a Dallas Mavericks fan. Still, Mark affirms that he is a beer drinker, and Daymond expresses his regret; he wishes he knew the market better since he would love to partner with Gary.

Unfortunately, Gary is left without an investor in the Vinamor. Although he left without a deal, Robert mentions that Gary is getting through the grind and has the heart to be an actual entrepreneur, and hopes for the best for him.

Vinamor Now in 2018- The After Shark Tank Update

Sadly, since the appearance of Vinamor on Shark tank nearly 4 to 5 years ago, it appears that the entire thing has gone defunct. Now, searching on Google does not yield any useful results other than the coverage of Gary on Shark Tank, but a more in-depth search finally reveals where and how the Vinamor can be found. The most worrying sign is the link to the Amazon storefront page, where the Vinamor is marked as “No stock available – We don’t know if or when this item will return.”

Still, the Vinamor was carried by a brand named “Wine Enthusiast,” which means that Gary either found a distributor or a potential partner before moving to run the operation on his own. Now, the Vinamor is available directly from the website (thevinamor.com) for the price of $24.95. The website also allows for a user to set up an account for some reason.

The Vinamor website looks rather rough and like it was done in the late 1990s, and the only product available on the website is the Vinamor, which is all by its lonesome self under the “All Products” page. The Vinamor is the only product, and truthfully, I do not see it as sticking around for all that much longer; Gary maybe set his sights too high and was unable to reach a more realistic goal. Now, the Vinamor has been forced to the back pages of the internet.

Vinamor does have a Facebook page, which was actually updated less than a month ago; still, the only previous update to the page was a post back from April 20th, and prior to that, December 7, 2015. Only 625 people like the page (a .2% increase from last week, WOW!), and most of the updated statuses have only received a few comments and words of encouragement. For all-intensive purposes, the Vinamor seems to be doomed to failure after a long battle of trying to keep alive.