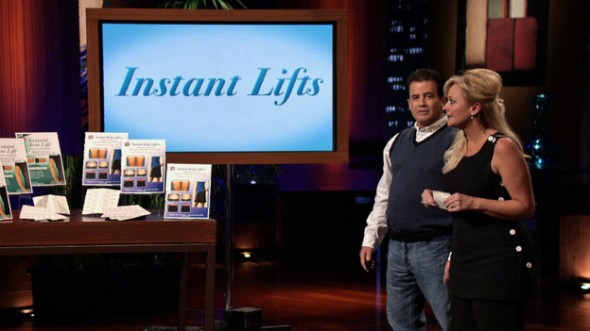 Stepping into the Shark Tank are Nick and Penelope LeRosa from Tampa Bay, Florida. The two of them represent Instant Lifts, and have come to the Tank to seek an investment of $100,000 in exchange for 25% equity in their business. Penelope begins by explaining that they have solved the problem of cellulite and sagging skin for women; Instant Lifts are derma-adhesives (skin adhesives) that attach and lifts and repositions the skin and makes everything look firm and tight.

They go on five different body parts, and hide discreetly under clothes. To demonstrate, Penelope jiggles her arm – this is a typical flabby arm, she explains. Take the product, apply it to the arm, or other desired spot, with a sweeping motion over the entire thing, and that sagging arm is gone. The before and after are drastically different under Penelope’s arms. Daymond looks rather disgusted.

Penelope then pulls up a picture on the television screen, which shows a pair of gross, saggy cellulite thighs. Then the picture cuts away to a much more appealing pair of legs, which have the Instant Lifts applied. Kevin snidely remarks that Barbara has been doing this exact same technique with masking tape forever, which draws a laugh from her. 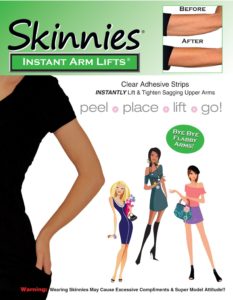 Mark asks about the sales, and Penelope explains that they have sold products for about 5 months and have made $75,000 between the two of them and the website – Daymond interrupts and asks if that is dollars or units, but Penelope replies with straight cash. Daymond looks perplexed for a moment. Mark asks about the retail price, which Penelope explains is a pair of 5 for $19.95. She then passes out samples to each Shark, while Robert asks about the line of other products from Instant Lifts. Penelope says that while they do have a few other products, they are namely here to pitch their Instant Lifts.

All of the products that Penelope and Frank have made have patents, but each of them are under different patents – they are here today to pitch the Sharks exclusively on Instant Lifts, which is intended to solely be used for the arms or thighs. Kevin remarks that is good to know they own patents for other products. Robert explains that they are selling him below the face, and not the face itself.

Mark then asks how the two of them will manage their time; as an investor, he wants them to work solely on the project that he has his money into. Frank simply replies that they will find a way to handle it, but Mark points out that “you cannot just handle it like a piece of cake.” Penelope then explains that their businesses are two entirely different products, but Robert and Daymond are lost; from a consumer perspective, they are the exact same thing. Mark agrees with this, and says that if his arms, butts and thighs need a lift, then maybe in the future he will look for an eye or chin lift due to the money spend on the branding of the product.

Frank looks to Penelope and says that they might be able to figure something out, including selling off some of their other businesses in the deal with one of the Sharks. Frank says that they have a lot to sell, and at this point, the convolution of the Instant Lifts sales pitch in the Shark Tank has become clear – the Instant Lifts product is primarily to be used on the arms and thighs, while their other products can be applied to different various areas. Frank and Penelope simply wanted to start off with Instant Lifts. Daymond then says he wants to start off with this; “I’m out.” Daymond is the first Shark out. 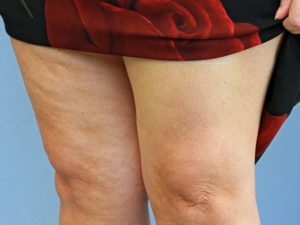 Kevin then breaks down the fact they have discovered that they have another product in the same category, and none of the Sharks are comfortable with that. As Mark pointed out, this means that Frank and Penelope are not solely working for their investor, which means that they are dividing their time between someone else. Frank looks to Penelope and asks that they include the sale of the “smooth sleepers” (which I suppose are patches that are intended to fix crow’s feet and baggy eyes), but Penelope points out that the Sharks are not talking about the smooth sleepers, but rather their face lift product.

Penelope then mentions “that product is not ours,” and Mark looks like he is about to blow up; he asks what their other product is while Kevin mentions, “there’s more.” Daymond even points out that the two of them are acting secretive about their product. Penelope tries to explain that they are not acting secretive as they do have a life outside of the Instant Lifts business, as she has three kids and – Mark cuts her off. Robert points out that the two of them just proved Mark’s point, and Daymond also agrees that Penelope just tried to use an excuse to circumvent the answering.

Daymond asks the two if they think it would be appropriate to call one of their potential Shark partners and ask for advice, but the Sharks would reply that “they are busy, we have a life too,” would they enjoy that? Penelope tries to say that they are not that type of people and they are focused, but Daymond explains that they just said that. If Penelope and Frank find a partner with the Shark, they will exclusively focus on their deal with them and work full-time for Instant Lifts, instead of dividing their attention and efforts. 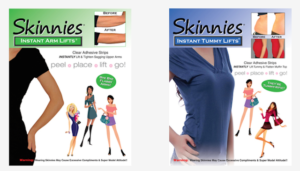 Daymond then compares this moment to “the moment a woman gets home and tears off the tape and her bingo wings come off.” The Sharks all laugh at this and Daymond explains the meaning of the term “bingo wings” to Robert, which is when an older grandma is playing Bingo and raises her arm to signify her win. Robert then gets back to business and explains that the crazy thing is, despite his strong initial interest, that they are attempting to create a new industry and category. The two of them are working under the premise of using tape to lift body parts, and he does not understand how they can divvy this up; for example, sell Barbara the shoulders, Daymond the legs, Kevin the boobs, etcetera.

Mark then butts in and says that there is simply too much confusion, and from a strategic perspective, the two of them made some choices that were not the right ones. So, Mark is out as well. Kevin then explains that they are not making any money and they are not on salary, so he is also out. Robert then says that the pitch does not stick together for him, and the entire pitch was very confusing; he is the third Shark out in rapid succession.

Only Barbara remains in the deal, and Frank tries to appeal to Barbara by saying that there are a lot of women out there who no longer wear shorts. Barbara then explains that she likes the product and could envision a lot of women using it, but the money is just too much for the few sales that they have. With that said, Barbara is the last and final Shark out of the deal, leaving Frank and Penelope without an investment in their convoluted business.

Barbara mentions that it is a shame that the pitch was so convoluted as she would have loved to be involved with the business, but Kevin disagrees. “When you finally get her home and untape your woman,” he says, “you will see what you actually got. Much like this business.” In the segment immediately after, Penelope expresses her regret for bringing up their face and eye tape, and instead not focusing on solely the body tape.

Instant Lifts Now in 2018- The After Shark Tank Update

As a prospective entrepreneur and collegiate business major, this was one of the more hilarious segments of Shark Tank – Nick and Penelope really screwed themselves out of a deal by not focusing on the product they wanted to show the Sharks, and instead losing their train of thought and being all over the place.

Now, Instant Lifts are available online only, through both the Amazon storefront and through their own website (author’s note, the website looks like it was made in the mid 2000s and there is obnoxious music playing, like a blog). Unfortunately, it does not seem like these pieces are well-received, nor does the website indicate any level of professionalism; most pieces of Instant Lifts are listed at a confusing price of $0.00 on the website, while the name will have the price in them. In addition, each product displays the number of Facebook Likes for each individual product, which is… an odd choice, to say the least. Needless to say, the most-liked product only has 35 likes, while the others all have less than 10.

On Amazon, the products have received quite the amount of criticism; the Instant Lifts for thighs only have a 2.8 star rating across 87 customer reviews, which is not good.

Overall, Instant Lifts seems to run a parallel to Nick and Penelope; everything is disorganized and scattered, and there is no clear information. The website has an awful table view (and grid/list views, which are both just terrible), which lead to more confusion. I wish I could list all the products that Instant Lifts has available for sale, but to do so would require too much time spent comparing the prices, SKUs, and the actual products. It’s just so disorganized and unprofessional.