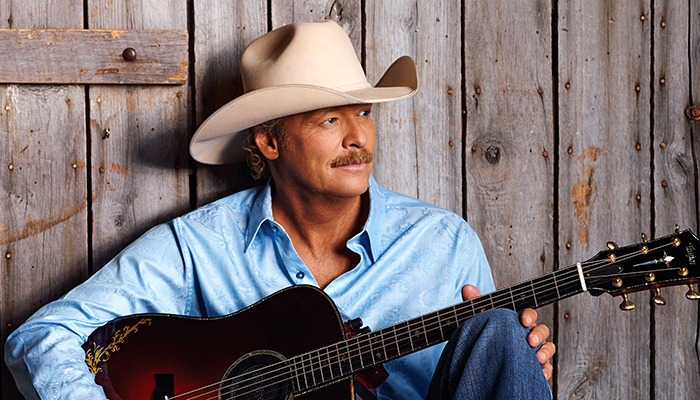 American singer, Alan Jackson is well known for many of his country hits such as Don’t Rock the Jukebox and Where Were You. Introduced to country music as a late adolescent, Jackson had his musical beginnings in a band which he’d founded after graduating from high school during the 70’s. Finding himself gravitating towards music as a career, he worked effortlessly to try to land a recording contract. After being rejected by a number of recording companies, he eventually secured a deal with Arista Records in 1989. At the age of thirty-one, Jackson released his first studio album entitled Blue Blooded Woman in 1989ーa commercial success, it would ultimately help to kickstart his dream of becoming a renowned musician.

Since his humble beginnings, Jackson has released over thirty albums and sixty singles, over fifty of which have successfully charted in the United States. As of 2013, he has sold a staggering amount of over 80,000,000 records worldwide. Considered by many to be one of the greatest country singers of the last two decades, Jackson has also been presented with numerous industry awards throughout the years for his achievements. To date, he has won fourteen Academy of Country Music Awards, fifteen Country Music Association Awards, two Grammy Awards, two American Music Awards, a Billboard Music Awards amongst several others. In 2001, he was also inducted into the Georgia Music Hall of Fame. An established country icon, the Country Music Hall of Fame also held an exhibit to celebrate Jackson’s 25th anniversary of being in the industry in 2014.

An accomplished musician, Jackson has been invited on to countless television series since the early 90’s. Some of the shows in which he has guest starred in include: The Rosie O’Donnell Show (2001), Headline Country (2008), CMT Insider (2011), The Tonight Show with Jay Leno (2012), Late Show with David Letterman (2013) and The Tonight Show Starring Jimmy Fallon (2015) and various others. On top of the performances which he’d made on the small screen, he has also appeared in a handful of TV documentaries such as America’ s Music: The Roots of Country (1996), Arista Records’ 25th Anniversary Celebration (2000) and When Pop Culture Saved America: A 9-1-1 Story (2011). In 2006, he also made a small appearance in season four of the reality show, Extreme Makeover: Home Edition.

What has the famous country star been up to since then? What new ventures have he taken on? What happened to Alan Jackson? Where is he now in 2018? 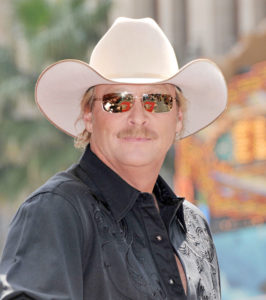 Born on October 17, 1958 in Newnan, Georgia, Alan Eugene Jackson is the youngest child of Ruth Musick and Joseph Eugene. Raised in a small family home built around an old toolshed which had belonged to his grandfather, Jackson was first introduced to gospel music by a friend during his early childhoodーan eventual passion which would peak his interest in music. He would later cite American country singers Gene Watson and John Anderson to be his inspirations. Growing up, his family was not too financially secure; living with his parents and four siblings in a small, modest home, there was a time in which Jackson had his bed placed in the hallway of their home due to a lack of room. To help out with his family, he took up a variety of odd jobs including working at a shoe store when he was twelve years old; at the time, he was also a student at Local Street Elm Elementary School.

As a teen, Jackson went to Newnan High School in Coweta County, where he eventually meet his wife Denise Jackson. Shortly after graduation, the two married in 1979ーhe was twenty one while Denise was nineteen at the time. Wanting to pursue a career in music, the pair relocated to Nashville, Texas in attempts to fulfill his dream. Upon settling down, Jackson soon found employment at the mailroom of the American television channel “The Nashville Network”. At that time, he also met American singer Glen Campbell who would help Jackson kick-off his career by recommending him to the music label, Arista Recordsーwho would ultimately offer the former a recording contract in 1989. 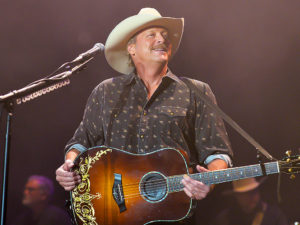 After recording a debut single in late 1989, Jackson released his first studio album Here in the Real World in February 1990. Produced by Keith Stegall and Scott Hendricks, the album consisted of ten tracks, most of which were recorded in the summer of the previous year. A few weeks after being made available in stores, Here in the Real World peaked at number four on the Billboard Top Country Albums and at number fifty-seven on the Billboard 200 Charts in the United States. Given a “B” star rating by Entertainment Weekly, the album later spawned five singlesーBlue Blooded Women, Wanted, Here in the Real World, Chasin’ That Neon Rainbow and I’d Love You All Again. In 1994, the album was certified Double Platinum by the RIAA for having sold over 2,000,000 copies.

Carrying on with professional singing career, Jackson released his second full-length album, Don’t Rock the Jukebox in May 1991. A huge hit upon its release, the ten tracks (one of which included a cameo line by George Jones) were given glowing reviews from critics. Don’t Rock the Jukebox climbed to number seventeen on the US Billboard 200 and eventually to the number two position on the Top Country Albumsーa large jump from his initial efforts. Having received a full four out of four rating from Chicago Tribune, Don’t Rock the Jukebox eventually produced five singles, all of which would go on to peak amongst the top ten in both the US and in Canada.

Rising quickly in prominence, Jackson released his third studio album entitled, A Lot About Livin’ (And a Little ’bout Love) in October 1992. Produced entirely by Keith Stegall, the album contained ten songs including the title track Chattahoochee as well as She’s Got the Rhythm (And I Got the Blues), Tonight I Climbed the Wall, and I Don’t Need the Booze (To Get a Buzz On). An even greater sensation than his previous album, A Lot About Livin’ (And a Little ’bout Love) peaked at the top of the Billboard Top Country Albums Chart and at number thirteen on the Billboard 200 Chart. It also saw success in Canada, where it settled at number five on the RPM Country Albums Chart and at number twenty two on the RPM Top Albums Chart. Four years after its release, the album sold over 6,000,000 copies and received 6x Platinum certification in the US.

Over the rest of the 90’s, Jackson continued to record and release four studio albumsーWho I Am (1994), Everything I Love (1996), High Mileage (1998) and Under the Influence (1999). Who I Am would ultimately be the most successful out of the bunch, having topped the Top Country Album Chart in the country with over 4,000,000 sales. 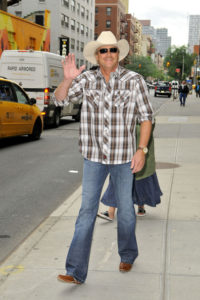 In the new millennium, Jackson released his ninth studio album When Somebody Loves You in November 2000.     Warmly received by fans and critics, the album did not disappoint as it offered listeners with eleven tracks of articulate music. When Somebody Loves You made its way to the number one spot on the Billboard Top Country Albums Chart and to the number fifteenth spot on the Billboard 200 Chart. The album later gave rise to four singlesーWhere I Came From, www.memory, It’s Alright to Be a Redneck and When Somebody Loves You. A year after its launch, it was given Platinum accreditation from the RIAA after having sold 1,000,000 units across the country.

The country singer released his tenth studio album in January 2002. Known as Drive, the album had thirteen songs, nine of which were written solely by Jackson himself. Critically acclaimed, it soon reached the top of three charts: the Canadian Top Albums, the US Billboard 200 and the Billboard Top Country Albumsーit would be his sixth album to have reached the number one spot on the Country Albums Chart in his native United States. A definite crowd-pleaser, the album earned Jackson numerous awards nominations including two wins for “Album of the Year” and “Video of the Year” (for its music video) by the Academy of Country Music in 2003.

Now a veteran country star, he released his next big album What I Do in September 2004. Featuring Shannon Wright and Jackson’s nephew as background vocalists in one of the tracks, the album was once again well-recieved having earned four stars from People Magazine. What I Do debuted at number one on the Billboard 200 Chart as well as on the Top Country Albums Chart and sold 139,000 units within the first week of release. However despite being a sellout, it would be the music artist’s first album to not produce any top ranking singles.

No where near retirement, Jackson went on to release six more full-length albums throughout the next decade including the more recent Angels and Alcohol (2015), The Bluegrass Album (2013), Thirty Miles West (2012) and Freight Train (2010). 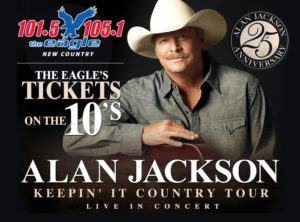 To commemorate his 25th anniversary in the industry, Jackson announced in 2014 that he would be embarking on a tour coined the “Keepin’ It Country Tour.” Kicked off at Fort Myers, Florida, the performances led the singer on a remarkable journey across dozens of cities before eventually ending at the Red Rocks Amphitheatre on May 17, 2015ーor at least it was originally scheduled to. Overwhelmed with support and enthusiasm from fans, Jackson later announced this February that he would be extending his 2015 tour into the next year.

Once again back on the road, the country star began his shows this year in late February in Texas at the San Antonio Stock Show & Rodeo. Since then, further tour dates have officially been announced; it is currently set to continue through until November at the Scheels Arena in Fargo, North Dakota. Will it really end there? Who knows! A second extension of the tour may be a possibility! Unique to the 2016 shows, this year Jackson has also brought fellow country singer Lauren Alaina along with him on the tour as a special guest.

But it looks like music isn’t the only thing on his mindーthis August, Jackson reportedly bought some real estate space on Lower Broadway in Tennessee. According to sources, the celebrity is planning to open his own local bar in Nashville, which will be called “AJ’s Good Time Bar” after his 2008 hit single of the same name. Later confirmations by Jackson himself have revealed that an elevator and a roof-top patio for the multi-story-building is currently also in the plans. While it’s still under construction, AJ’s Good Time Bar is tentatively set for a grand opening in early 2017.

If you’d like to stay up to date with the famed American musician, you can do so by following him on social mediaーyou can find Alan Jackson on Twitter (@officialjackson) as well as on Instagram (@officialalanjackson)!