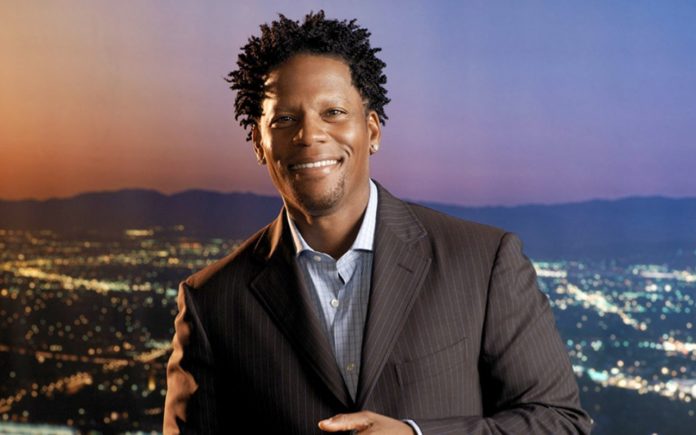 Comedian, radio host, sitcom star and even a CNN New Consultant, D.L. Hughley rose to fame despite some very rough beginnings and has become a household name. In recent years though, he has somewhat withdrawn from the public spotlight. What has D.L. Hughley been up to in 2016?

Born on March 6, 1963 and the second of four children to Charles and Audrey Hughley, D.L. grew up in the rougher part of Los Angeles. In fact, his teen years would see him become a member of the Bloods, and result in his expulsion from high school. These days would come to an end not through money or incarceration; Instead, D.L. decided to try a different path in life after his cousin, a member of a rival gang in the area was killed. After the event, he would seek to complete his G.E.D. and worked for the Los Angeles Times as a Telemarketer.

It was when working for the L.A. Times that he would start experimenting with comedy, and met his future wife La Donna (who are at this point celebrating 30 years of marriage). With LaDonnas support and urging, D.L. began performing at local clubs until his unexpected and blunt humor landed him a place on the Def Comedy Jam.

A King Of Comedy

During his appearances on Def Comedy Jam, D.L. Hughley would stand out as a crowd favorite. By 1992, he had gained a position as host of the BET show “Comic View” and would keep it for a little over a year. After the end of his tenure, Hughley would go onto a comedy tour session until 1998 when he was offered his own sitcom which lasted until 2002. He would as a result of this sitcom be presented with an outstanding actor award by the NAACP. While still filming this sitcom, he would also ride with the Original Kings Of Comedy, which would be one of his mainstream successes as a result of the Spike Lee Movie documenting a performance of the group.

Hughley would leverage this new found popularity to release his special and also starred in a new show on Comedy Central, “Weekends at the D.L.”. Until 2007, D.L. would juggle his starring roles with many other guest appearances, as varied as to show on both “Scrubs” as Turk’s brother and recurring roles on “Studio 60 on the Sunset Strip”.

2008 would prove to be a bittersweet year however, as he would speak at two very different venues: The BET Awards, as well as the funeral of his fellow King of Comedy, Bernie Mac who had passed of Sarcoidosis (a disease which caused his lungs to become overly inflamed).

After the passing of Bernie and the conclusion of his own show, D.L. would take to the Late Night and comedy circuits once again, releasing “Unapologetic” via HBO. During this time, he would also write a slew of books including “Black Man, White House” and its similarly named sequel. He would also appear as host for” Who Wants to Be a Millionaire”, and had even been in talks for his own game show (though he already had joined CNN for a comedy news show a la The Daily Show variety). This would shortly come to fruition in 2013 as “Trust Me, I’m a Game Show Host” and would last 10 episodes. Afterwards, D.L. would begin focusing on his career in Radio.

Starting in 2013, and still currently airing in 2016, D.L. Hughley would host his own radio show which would air on over 60 stations, titled after himself. Soon after the start of this series, he would also frequent “Real Time with Bill Maher”, and even has appeared on “The View”, a morning talk show.

A new branch of creativity D.L. Hughley attempted this year, far from his typical routes is one many comedians have never quite nailed: A serious role. In Heartbeat, the series based on “Heart Matters” by Kathy Magliato, D.L. Hughley played the hospital psychiatrist, Dr. Myron Hackett. Unfortunately, the series that started in March 2016 ultimately failed in May 2016, receiving a disheartening rating of 17% on rotten tomatoes and overall negative reviews by critics.

This has hardly shattered D.L. Hughley however, as he continues his radio program, comedy, and routinely appears on talk and news programs to discuss the often controversial and hard to tackle current happenings. Throughout it all he has remained true to himself, whether seeking laughs or genuine dialogue.