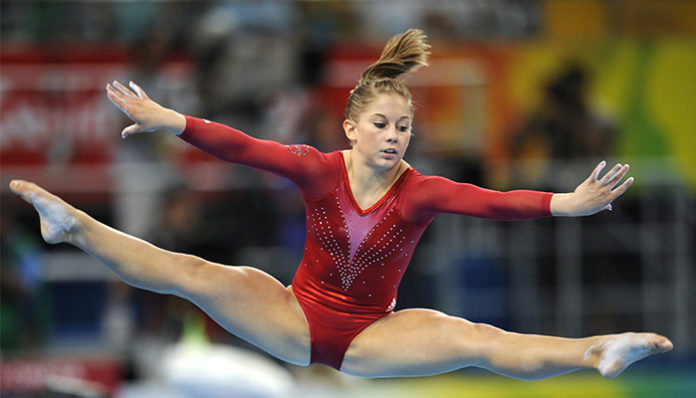 Shawn Johnson is an American artistic gymnast who is best known for her achievements at the 2008 Summer Olympics. Aside from winning a gold medal from the balance beam event, she is also a silver medalist for the all-around, floor exercise and team events. Noticing her agile nature, Johnson’s parents first enrolled her in gymnastic classes when she was three years old. Excelling at the sport, she eventually found herself competing in the Junior Olympics National Championships by the time she was twelve. Proving herself to be one of the best gymnasts in the country, she was later invited to the national training camps; she became a part of the United State’s senior team in 2007 at the age of fifteen. Not only is she an accomplished Olympian, but Johnson has also won the all-around at the Pan American Games, American Cup, World Championships as well as the National Championsーall during her first year as a senior gymnast.

A three-time all-around Champion from the United States, Johnson has seen over a dozen competitions as a professional gymnast. Known for her consistency, power and difficulty of moves, she was the first in the country to complete a two and a half twisting Yurchenko Vaultーone of the hardest vault elements out there in gymnastics. Aside from the medals which she’ve accumulated throughout the years, Johnson has also received a number of awards for her accomplishments including two Teen Choice Awards for “Best Female U.S. Olympian”, a Longines Prize for Elegance, as well as a prestigious AAU James E. Sullivan Award. An inductee of the USA Gymnastics Hall of Fame since 2007, October 17 has even been proclaimed by the Governor of Iowa to be “Shawn Johnson Date” in her honour!

In between her training and competitions, the Olympic gold medalist has also appeared in several reality television seriesーthe most well known probably being that of ABC’s Dancing with the Stars. In February of 2009, Johnson starred as a celebrity contestant on the show’s eighth season; partnered up with professional dancer Mark Ballas, the pair ultimately came out as the champions during the finaleーmaking her the youngest winner in the history of the show at the time. A few months after the announcement of her retirement in 2012, she returned once again to the dancing floor in the all-star edition of Dancing with the Stars, which premiered that fall.

So what has she been up to now that she has retired as a professional gymnast? What projects have she been working on these years? What happened to Shawn Johnson? Where is she now in 2018? 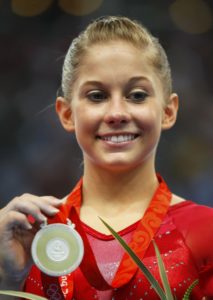 Born on January 19, 1992 in Des Moines, Iowa, Shawn Johnson is the daughter of Teri and Doug Johnson. Noticing her habits of jumping off furniture and climbing cabinets, they enrolled her in gymnastics when she was three years old. When she was six, Johnson went to a newly opened gymnastics school in West Des Moines, which was opened by Liang Chowーmaking her one of his first students at the establishment. As a teen, she went to Valley High School where she was an honour roll student who was also also highly involved with extracurriculars such as dance and football. Compared to many of the other elite female gymnasts, Johnson was able to maintain a much more balanced lifestyle throughout her teenage years; for instance, while her fellow athletes trained 40 hours a week, she limited her training to approximately 25 hours a week.

At the age of seventeen, Johnson left public schooling and moved to the bustling city of Los Angeles, California; she eventually completed her high school education with the help of a private tutor. It was later revealed by the former gymnast herself that she had suffered from an eating disorder during the late 2000’s, prior to the events of the 2008 Olympicーshe admitted to having only consumed around 700 calories a day at the time, which is less than half of the recommended intake for a teenage girl. Following her retirement from the sport in 2012, she enrolled at Nashville’s Vanderbilt University, where she studied in both nutrition and psychology. In the summer of 2015, Johnson became engaged to long-time boyfriend Andrew East, a former player of the NFL Oakland Raiders during a Chicago Cubs baseball game; they later tied the knot in April of 2016. 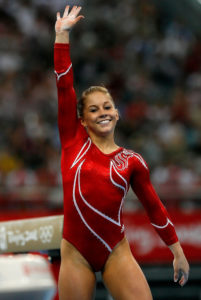 Prior to her elite days, Johnson competed in her first Junior Olympics National Championships at the age of twelve, where she ended up placing second on floor, first on the beam, and fourth on the all-around. Unlike many of the other US professional gymnasts, she was not scouted by USA Gymnastics; in fact, her coach Liang Chow had no interaction or contact whatsoever with the national staff. Wanting to help kickstart his student’s career however, he eventually reached out to Marta Karolyi, the Coordinator of the National Team by sending her a video of Johnson’s abilities. Although she initially felt that his actions were audacious, she later invited her to join the national team’s gymnastic training camps.

Proving herself to be a worthy contender in the sport, Johnson qualified for the Junior International Elite with ease on her first attempt. After finishing third at the 2005 U.S. Classic, she garnered much recognition and public attention as a gymnast. Despite having had a promising start at the subsequent 2005 US National Championships however, she ultimately finished in tenth place for the all-around after falling off of the balance beam on the first day. The following year, she added many new tricks to her repertoire, including a double twisting double-back on floor, a full-in back-out dismount off the beam, a Jaeger on the bars as well as two other top difficulty skills. With those skills underneath her belt, she managed to win the championship title at the 2006 US Junior National All Around Championships with a much higher score than the rest of her fellow competitions. 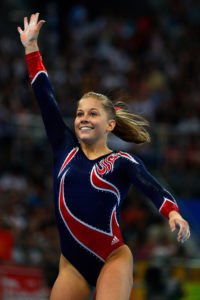 Three years after competing at the Junior Olympics, Johnson began her senior career in 2007. Continuing to impress the crowds with her moves, she showcased several new skills including an impressive double-twist double-layout dismount off of the uneven bars. That year, she competed at the American Cupーan international elite senior-level gymnastics competitions held in the US and eventually took home the win for the all-around, beating fellow team member Natasha Kelley in the process. In the sumer Johnson also took part in the Pan American Games, where was ultimately awarded four gold medals for the beam, all-around, bar and team events; she also won a silver medal on floor.

Not too long after, she was a competitor at the Visa US National Championships, where she came out as the champion after beating fellow American gymnast Shayla Worley by a margin of over three points. Also worth mentioning is the fact that she finished with a score that was over five points ahead of Nastia Liukinーa crowd-favourite who has won two National Championships previously. Alongside Liukin, Johnson  went off to the 2007 World Artistic Gymnastics Championships as a representative of the United States; while her team placed first in the preliminaries, she herself qualified for the floor, beam and all-around finals. Although she fell while dismounting from the bars, her American team eventually brought home the gold medal with a score of 184 pointsーbeating China by less than hand a point. During her individual final event, Johnson finished last on the balance beam although she received gold in the floor exercise despite having went out of bounds on her initial tumbling pass.

A few months prior to the Summer Olympic Games, Johnson competed in at 2008 American Cup that March, where she placed first on the floor, balance beam and vault exercises. Shortly afterwards, she represented her country in the Italian city of Jesolo where she went up against several countries such as Poland, Spain and Italy. While her team won both the junior and senior all-around, Johnson held the highest scores on beam, floor and vault where she earned 16.2, 15.0 and 15.2 points respectively. In late June of 2008, the gymnast won the all-around at the Olympic Trials held in Pennsylvania, where she once again scored higher than Liukin; immediately after the trials, the pair were named as two members of Team USA’s gymnastic team.

Shawn Johnson at the 2008 Summer Olympics 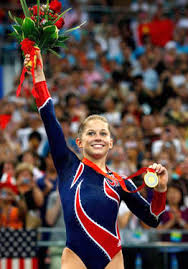 At the long awaited 2008 Summer Olympics in Beijing, the then-16 year old competed in all four of the gymnastic events during the team competition. In the individual all-around, Johnson received a score of 62.725 and eventually won silver, behind her teammate Liukin who scored 63.325 pointsーit marked the first time that Team USA won both the gold and silver medals at the event.

In the floor competition, she received silver with a score of 15.500, trailing behind gold medalist Romanian gymnast Sandra Izbasa while Liukin finished third just 0.075 points behind. Soon after, Johnson performed a near perfect routine on the balance beam and received goldーsimilar to many of their previous competitions, both she and Liukin claimed the first two medals at the event. Although she had qualified for the uneven bars finals as a second reserve, she did not end up having to compete. 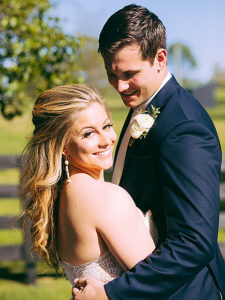 The Olympic gold medalist, who has since retired from gymnastics back in 2012, recently gave an inspirational lecture at the Stewart Theatre in North Carolina. Standing in front of a packed audience, she shared her experiences as an olympic athleteーboth her failures and successes. In her speech, she revealed that despite her accomplishments as the youngest member of the US Olympic gymnastics team, many Americans had behaved “as if she had failed” after she took home three silver medals out of her four final competitions. Speaking of the importance of “coming to terms with accomplishments”, she later ended the event with the message “to remain passionate about whatever subject and to not let other’s perceptions come to define them.”

In other news, Johnson has just tied the knot with her boyfriend of three years Andrew East, a former player of the Oakland Raiders in April of this year. Organized with the help of celebrity wedding planner Sara Fried, the wedding took place at a private farm in Franklin and according to the brideーwas “intimated and relaxed, just as she had hoped. When asked about the possibility of future children, Johnson answered by saying that although they aren’t thinking of kids anytime soon, both her and her husband are “big family”-types and will definitely consider having children when the time is right.

If you’d like to stay up to date with the former professional gymnast, you can do so by following her on social mediaーyou can find Shawn Johnson on Twitter (@ShawnJohnson) as well as on Instagram (ShawnJohnson). Don’t forget to also check out her official Facebook page!