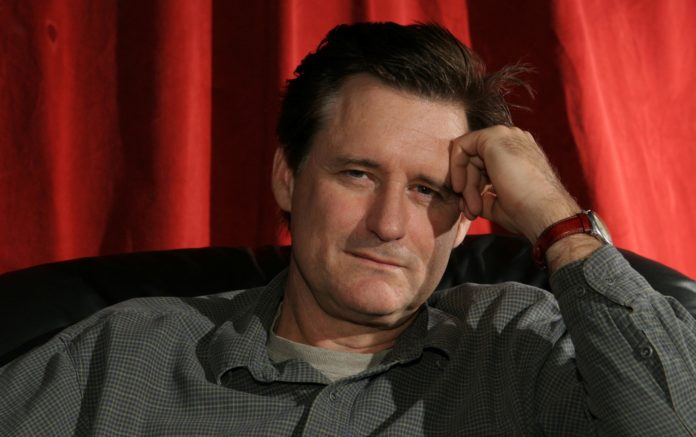 Bill Pullman is an actor who’s famous for many notable films like Independence Day and for his many impressive performances onstage.

Before we check out the latest regarding Bill Pullman, let’s first revisit his life and his illustrious career.

Born on December 17, 1953, William James Pullman was the youngest among seven siblings. The family lived in Hornell, New York, and his parents James and Johanna purchased a $1,000 tree farm near their home on the same year Pullman was born. They spent their summers on the farm where the young Pullman learned how to plant trees and work in a dairy farm. During his teenage years Pullman was quite active in sports, and he also played the trombone in the high school band.

In 1971 Pullman pursued a degree in building construction at the State University of New York (SUNY) in the town of Delhi. He was driven by his love of the countryside’s barns hence the reason of choosing that degree. However he had a change of heart after an audition for the stage play “The Bald Sopranos”. The experience made Pullman jump ship to theater arts and he got the diploma in the Oneonta campus of SUNY. Afterwards Pullman enrolled at the University of Massachusetts and got his Master of Fine Arts degree in 1980.

Pullman joined the ranks of the faculty of Montana State University after finishing his studies. One of his students was future director John Dahl. At the same time he was part of the summer theater group “Shakespeare in the Parks” where he worked as both actor and director. This venture also helped him form connections in the industry. Soon enough Pullman tried to enter the professional scene by being active in the theater scene in New York. Pullman relocated to the city and juggled odd jobs while auditioning.

Bill Pullman on the Big Screen

Pullman was part of the cast of The Curse of the Starving Class in 1985 wherein his performance was highly praised. Later on he relocated to Los Angeles for the 3-month run of the play Nanatawai. At the Los Angeles Theater Center he performed in other plays such as Demon Wine and All My Sons.

Pullman decided to try his hands on the big screen while he was in Los Angeles. He auditioned for a spot in the comedy film Ruthless People and got the role of Earl Mott. The film was released in 1986 and proved to be both a critical and commercial success.

Pullman’s onstage performance in theater caught the interest of director Mel Brooks. This led to Pullman’s inclusion in the cast of the 1987 parody Spaceballs. In the last years of the decade Pullman acted on films aside from comedy such as the 1988 horror The Serpent and the Rainbow and drama Rocket Gibraltar.

Pullman had his directorial debut in 2000 with the western TV movie The Virginian and he also played the lead role. It won the “Bronze Wrangler” award during the 2001 Western Heritage awards. He also lent his voice in the animated film Titan A.E. during the same year. His new millennium was populated with movies ensuring that he starred something on a yearly basis, and his hard work was recognized in 2008 with the “Master of Cinema” award in the RiverRun International Film Festival, and the “John Cassavetes” award in the Denver International Film Festival.

Bill Pullman on the Small Screen

Pullman’s extensive filmography also included a fair share of work in television. His first appearance on the small screen was way back in 1986 in the series Cagney & Lacey. Four years later he guest starred in the variety show The Tracey Ullman Show as a magazine writer. He mostly had television movies throughout the 90’s.

In 2001 Pullman co-directed the third episode of the first season of Night Visions with Joe Dante. 2005 saw him star in the six-episode miniseries Revelations, and in 2011 his 8-episode appearance in Torchwood: Miracle Day earned him a nomination for the “Best Supporting Actor” Saturn Award.

His latest work in television was in the comedy 1600 Penn as President Dale Gilchrist for 13 episodes.

Aside from the big screen Pullman still makes sporadic onstage performances. He was one of the many rotating actors in the 1997 play The Sad Lament of Pecos Bill on the Eve of Killing His Wife. In 2002 Pullman starred in The Goat or, Who Is Sylvia? for a year and he was nominated for the “Outstanding Actor in a Play” award during the 2002 Drama Desk Awards, and the critics loved his work. The Goat raked in four different awards for the “Best Play” category.

Four years later he joined the revival of the 1964 award-winning play The Subject was Roses with actors Steve Kazee and Judith Ivey. The trio was nominated for the “Outstanding Lead Actor / Actress” award during the Helen Hayes Awards in 2007. Before the year ended, Pullman was once again onstage for Peter and Jerry and again he was nominated for the “Outstanding Actor in a Play” award in the 2008 Drama Desk Awards.

Now recognized as a stage veteran Pullman was recruited along with four other top-tier actors in 2013 for The Jacksonian. Awards were again elusive as Pullman was only nominated for the “Outstanding Featured Actor in a Play” accolade in the 2014 Drama Desk Awards. His 2015 performance in Sticks and Bones was another that earned him a nomination.

Pullman added writing to his resume in 2006 when a play he personally penned titled Expedition 6 opened. The plot was a dramatization of the eponymous space expedition that took place in 2002 to 2003.

During the CinemaCon awards last April, Pullman and the rest of the Independence Day: Resurgence cast were given the “Ensemble of the Universe” award. Pullman then received an “Excellence Award” during the Locarno International Film Festival in July.

He starred alongside Woody Harrelson and Richard Jenkins in the political drama LBJ which was already screened last September during the Toronto International Film Festival. Unfortunately LBJ still doesn’t have a major distributor so it still doesn’t have a final release date for 2018.

But if you’re itching to watch him again on the big screen then worry no more as Pullman has two upcoming films next year namely Walking Out and Trouble. He’s set to star in the western The Ballad of Lefty Brown which is currently being filmed, and alongside Jessica Biel in the thriller series The Sinner.

Pullman penned another play titled The Wild Hunt which puts the spotlight on Norse mythology. He teamed up with theater director Jennifer McCray Rincón for this project which is still currently in the works.