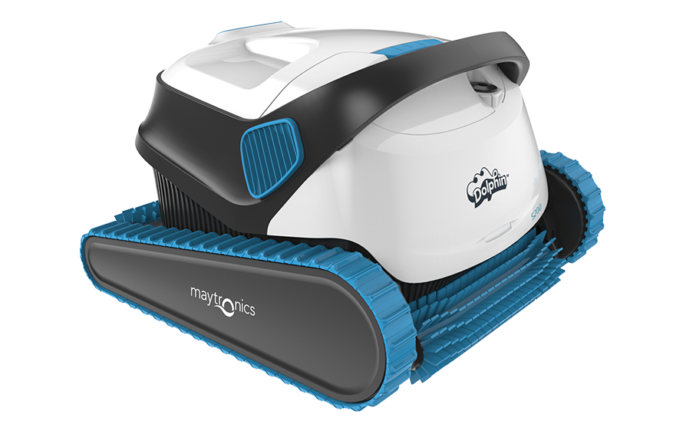 Last week was not a good one for the S-Series of robotic pool cleaners from Maytronics. The S 50 proved to be a bit of a lackluster machine, one that I couldn’t recommend, and I am always loath to say that. Which is why I was quite surprised by the quality on offer in the rest of the S-Series. The S 200 is a fantastic bot, on par with the Active 20, able to do everything I ask of it, and a bit more besides.

I am not a demanding reviewer. All I want from a robotic pool cleaner is a few core features, a few time saving build designs, and to see it clean. So long as I have those three things, I can sign off on it. The rest is up to the customer really, is the price right, is the pool size right etc. So when I found the S 200 doing all the things I want a pool cleaner to do, I thought I was in the clear, but there are a few interesting secrets beneath the hood of the S 200.

Let’s get to it then, break this bot down and see if it is the right robotic pool cleaner for you.

The differences in terms of build quality between the S 50 and the S 200 are quite possibly the most stark between a bot series that Dolphin has ever produced. Everything here, from the plastics used to the propulsion system is better. The sealing of the treads is amazing, and should have been on the S 50 in the first place, but let’s not dwell. Remember to give your bot a bit of a shake when you get it, the internals should fit flush, and so there should be no rattle. Sound is a sign of an internal factory fault, and you will likely need to make use of your warranty.

As to the look of the build, I feel like Dolphin really do listen to me. The finish is black, exactly what I asked for from the S 50. Coupled with white and blue too, this really is one of the best looking robotic pool cleaners on the market. The handle is elegantly woven into the body of the bot here, and water flushing vent is integrated into the design as well. Dolphin rally knocked it out of the park with this one.

I am well aware that for the most part the look of the build is not that important, but I find when you are choosing between bots that have very similar feature sets, that the aesthetics of the build can be the deciding factor. The latter end S series of bots , and the better Active bots, share features and design philosophy, so if you are stuck between them, the cooler looking bot wins out, and the S 200 has an edge there.

Moving on from the relative disappointment of the S 50, onto the S 200. A riff on the Active 20 in many ways, the S 200 does everything that you need a robotic pool cleaner to do, if not everything you want it to do.

The S 200 is an in ground pool cleaner with a 60ft swivel cable. I am always happy to see a swivel cable, they help cycle stoppages through tangling. If you have every owned a robotic pool cleaner in the past you will know how annoying a cycle stop can be. The pump system that comes with the S series of bots is the new Dolphin high powered pump, able to process 3,735 gallons of water every hour. More than enough to leave a pool sparkling.

The scrubbing brushes are unique to the S series and the Active series, and I apparently don’t know what unique means. They rotate at twice the speed of the Dolphin nautilus brushes, but are made of a softer material, so you don’t run the risk of scouring the bottom of you pool. They make short work of the tile line grout and can break up algae nicely. There is again just the one cycle option with the S 200, a simple 2 hour clean. It gets in and cleans deep, far more quickly than a manual 2 hour clean. It can also climb the pool wall, making the move from horizontal to vertical with ease.

There isn’t much else beyond those core functions with the S 200. It is what I would cll a bare bones device, though there are plenty of bots on the market that cannot do even  the few things that the S 200 can. The S 50 for example. Regardless, there is little else you would want it to do. There is a weekly timer function, but without a full filter indicator that has limited use. The later S-Series models all add more and more features to the S 200 core model, but they aren’t all that useful. I would have liked to see a remote control option, but again, what are the path finding algorithms for?

At the end of the day the S 200 does everything you would want it to. It might not be all that fancy, but it does a good job of cleaning the entirety of the pool, and it looks good doing it too.

Maytronics Dolphin S 200 Ease of Use

I have been reviewing robotic pool cleaners for a while, I have studied them, I have watched them work, and in that time I have been able to break them down into two core categories. The older model external pump system bots and the new school all in one bots. I have reviewed them both, and am amazed at some of the tech that goes into the external pump system bots, but on the whole I prefer the simplicity to the All in one options. These bots can themselves be broken down into two broad categories. The Legacy design bots and the Ultra Moderns. The Ultra Moderns all use top mounted filter chambers and cartridges over the bags of old. They were great, but were not without issues. The S 200 goes one step beyond into the Post Ultra Modern, with this new filter basket system.

This filter system is a work of genius. In the old Legacy Design bots the bottom mounted filter chamber was an annoyance, having to flip the bot every time you wanted to change the filter bag just seemed like lazy design to me. They all worked well, for sure, but day to day was cumbersome. The Ultra Moderns fixed these issues by placing the filter chamber access at the top, and using a filter cartridge over the bag. It was true that it was less prone to getting stuck, leading to cycle stoppages, but it was as difficult to clean. This new filter basket system is both top mounted and easy to clean. just take it out of the bot and hose it down, it really couldn’t be any easier to use. The actual use of the bot is as easy as it ever was, plug it in, drop it in the pool and set the cycle.

Robotic pool cleaners by their very nature are ludicrously easy to use. I only mention how to work them in passing, as they really are very intuitive, the all in one models anyway. I use this section to talk about the day to day issues of owning a bot, and with these new Post Ultra Modern bots there really aren’t any. I suppose it is arguable that the weight of the bot and short handle are issue, but they are so minor I hardly thought them worth mentioning.

Here we are at my favorite section. The Price. It doesn’t matter if you are the most full featured bot in the world, or the least, a good price can save anyone. The S 200 falls into the $800 range, and considering the lack of bells and whistles that is just the right price point for it. I recommend clicking here though to see all the current discounts available as sometimes you can get a pretty good deal.

Keep in mind the lower priced bots in the S-Series are cheaper, but lack a few key features, and the bonus features you get for going up a tier are not worth the price.

On average you can expect to pay 14c per cycle. The more expensive place run to 17c, while the cheapest places for electricity pay a mere 11c per cycle. Overall, not much, but I feel that any new electronics brought into the household should be though about in terms of running costs.

I spend so much time reviewing products you wouldn’t believe. One of the things that takes up most of my time is warranties. There are plenty of great ones, that cover everything you would want it to, and there have been a few bad ones, looking at you Aquabot limited warranty. The Maytronic Dolphin warranty is an unknown. They haven’t sent it to me. I have inquired, i have emailed them on many occasions, and still I am left bereft. What I can tell you about the S 200 warranty is that it is a 2 year bumper to bumper. With cars, bumper top bumper covers everything, but I do not know as to how it translates to robotic pool cleaners.

This is quite possibly my favorite robotic pool cleaner. the Active 20, S 200 and E 20 are all amazing. They are also essentially the same bot. Maytronics has exclusivity deals with a variety of brick and mortar stores, and so sells the same basic bot under different names, with a few features turned on or off. Great news for you the consumer, as if you like the S 200 you have two others just like it to look for. The bot may not have much in the way of bells and whistles, but it has a top notch core design and it does everything you would want it to do.

If you want to see all the current deals available on the Dolphin Pool Cleaners click here.