The Top 10 Most Common Last Names 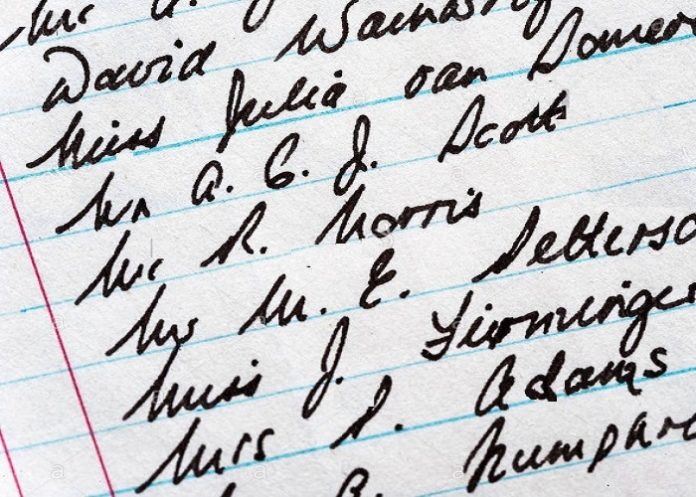 The human race is a wonderfully diverse species, we come in all shapes and sizes and no two of us are exactly alike. We’ve come a long way from our primal roots, and our knowledge and advances have been passed on from generation to generation until we’ve reached our current advanced level of civilisation. We’re all given a name when we’re born, and it does more than just give us something to be identified as, your John Hancock could say a lot about your history and heritage, even if you didn’t know it.

So what’s in a name? Well in the West it’s often an indication of what your distant relatives may have been doing centuries ago, and you may think that you have a common surname, but is it common enough to make the list of the top? Let’s take a look at the ten most common Western surnames and see what we can find out and their roots and original uses.

No prizes for guessing what this Surname indicates, Taylor indicates that one of your descendants was a tailor or seamstress back in the mists of time. The name originates from the old French word ‘tailleur’, which means tailor, and it was derived originally from the Latin word ‘taliare’, which means ‘to cut’. Taylor also shares tenth place with Anderson, which simply means ‘the son of Andrew’, and Thomas, which has been used in English speaking countries since biblical times. In recent times the Christian name Taylor has become much more widely used, particularly since the success of singer-songwriter Taylor Swift.

Moore has been used in England since medieval times to denote one who works on a ‘mor’, which is the old English word for open land, or a bog, but the name also has it’s roots in the French and Italian language, being derived from the Christian name ‘Maurus’, a Latin name commonly used in Ancient Rome, and which actually meant ‘Dark Skinned’. The name was often used as a nickname in 16th century England for a person with a dark complexion and the use of the name in English, French and Spanish speaking countries during the middle ages has led to it’s widespread use in the modern age.

Will was one of the most common names of the dark and middle ages, mainly due to the constant state of conflict between the powers of medieval Europe. Will was a combination of ‘Will’, meaning ‘Desire’, and ‘Helm’, indicating protection, or a helmet. It was the name of a soldier and hence its common usage during those turbulent times. Wilson was simply the name given to the son of a man named Will. In recent times the surname has spawned many variations, mainly due to lower literacy rates in past centuries, and these days Wilkerson, Wilkins, Wilkinson, William, Willianson and Willis are all derived from the original Wilson name. Other variations of the name exist throughout Europe, most notably in The Netherlands and Scotland.

Grain mills provided the vast majority of our food in times past, and working in a mill lead to the employees being called Miller. The industrial revolution eventually reduced the need for such a large number of mills but it wasn’t until a century or so ago that mass production techniques, chemical advances in agriculture, and motorized transportation made mills an unprofitable and outdated method of production. The name originates from the old English word ‘mille’, which means ‘To Mill’, and it has variants across Europe, including ‘Møller’ in Danish and German, as well as Mueller and Müller and, a nugget of information to impress your friends who liked the X-Files, it’s ‘Mulder’ in Dutch, so now you know where the mysterious Mulder really came from.

David has been a popular name in English speaking countries since the rise of Christianity, particularly during the middle ages and the religious crusades in England, it is exceptionally popular in Wales, after the patron saint, and also in Scotland, where it has been the name of two kings. The name most likely originated from the Hebrew word ‘dwd’, meaning ‘Beloved’ originally. Davis, which means ‘Son of David’ has spread as a surname throughout Europe, and across the World and has since had many variants established in other countries, including Davidson, Davison, David and Davidsen

Into the top five most common names now and Brown, although common, is still only common to 0.6% of Westerners. It’s roots are a reminder of a less tolerant and considerate age. It was originally used as a nickname for a person with brown hair or skin, in far distant times, although these days it’s original meaning is not widely known. The surname has created many variants, including Browne, and Bronson, which means ‘Son of Brown’, but the names Braun, Braune, Bruhn, Brun and Brune are all fairly common in Germany today, and Bruno and Brunetti are amongst the most common Italian surnames.

Jones as a surname has derived from the most common Christian name of the last millennium, John. John was in the Old Testament as ‘Johanan’ or ‘Jehoanan’ but it’s popularity throughout the centuries is largely attributed to two new testament characters. Firstly John the Baptist, who baptised Jesus, and was later executed by Herod, and John the apostle, who is believed to be the author of the fourth gospel and the book of Revelations. The name has always been common in Christian countries, but particularly in England in the middle ages, when it was given to an incredible 20% of boys, which must have led to untold confusion at the time, ‘Short John? Short John with the scars or Short John with the limp?’ is a conversation I would like to believe took place on a daily basis, although this is merely conjecture on my part.

Originally a variant of Wilson, meaning ‘Son of William’, which came in at number eight in our list, Williams has today become a far more common name than it’s originator, mainly due to it’s introduction into England in the 11st century by the Normans, after William the Conqueror’s ascension to the English throne. It’s been the name of three English kings, and rulers of Scotland, The Netherlands and Prussia. The name is particularly common in Scotland today and was the name given to Sir William Wallace, the character portrayed by Mel Gibson in Braveheart.

As we’ve already discovered, John has remained one of the most popular, if not the most popular Christian name in Western countries for centuries, and Johnson, meaning ‘Son of John’ is as a result the second most common surname in the West today. The name has a huge number of variants that have been incorporated into other languages throughout the ages and it is the originating point for such names as Ivanov, Johansen, Hensen, Janson, Yancy, Zanetti, Johansen, Jankovic and Evans, amongst many others, The Surname Johnson has been borne by two US Presidents Andrew Johnson and Lyndon B. Johnson, but there are people with the name everywhere, Michael Johnson. Magic Johnson, Dwayne ‘The Rock’ Johnson and countless others all share a piece of history in their own name.

Have you ever wondered how many people you’ve met in your life? People you’ve actually talked to and learned their name? Well if you’ve got complete memory recall, or you’re just really good with names then you can probably work it out. Smith is the most common surname in Western nations and it is shared by just over 1% of the population, so if you multiply the number of Smiths that you’ve met by 100, then you have the total number of people you’ve met, although according to my own method, I’ve met over a million people, which perhaps says more about my lack of mathematical ability rather than the endless social interaction that I’ve apparently experienced in life. The name came from a common occupation in old England, that of the blacksmith, or metal worker. Smith was derived from the old English word ‘Smitan’, which meant ‘To smite’, or ‘To hit’, and it is the most common surname in the English speaking World today. Common variants are Smythe in English, Schmid, Schmidt and Schmitz in Germany, and Smets, Smit and Smits in The Netherlands.

So there you have it, the most common Surnames in the West, and if your name is up there and you always wanted to have an exotic name conjuring up images of mystery and intrigue rather than just that common old surname, then just remember that not all of us can enjoy the luxury of using our real name on the internet.