Kevin Durant Net Worth – How Rich is He Now? 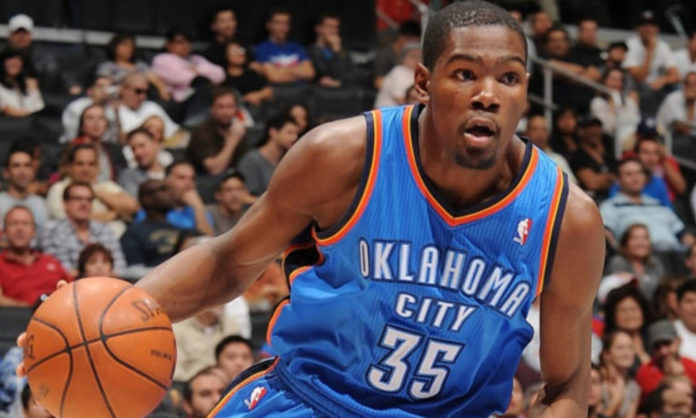 Kevin Durant made headlines this year when he made the decision to with the Golden State Warriors. This was seen as a shocking move, as Durant was widely considered to be the face of the Oklahoma City Thunder. Honestly, Durant has been making headlines throughout the duration of the career. Whether it’s lofty contracts or jaw-dropping games, he has always been impressing the basketball world. In this article, I’m going to be discussing the wealth of Kevin Durant, while also covering how he was able to rise to such prominent heights in the NBA.

How did Kevin Durant make his money & wealth?

Kevin Durant was born in September of 1988 in Washington, D.C. Growing up, he was highly interested in basketball, and he always dreamed of playing for the Toronto Raptors. He played high school basketball during his senior year at Montrose Christian School, where he majorly impressed a lot of people. The Washington Post named him the All-Met Basketball Player of the Year, and Durant was seriously recruited by a wide variety of different schools during his senior year. He ultimately committed to play for the University of Texas, and although he only played with the school for a single year, that was plenty of time for Kevin to show the world what he was made of. 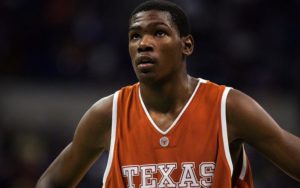 During his freshman year, Durant averaged 25.8 points, 11.1 rebounds, and 1.3 assists per game. He led the entire freshman class in scoring, and with the help of Kevin’s strong performance, the Texas Longhorns were able to earn themselves a fourth seed in the NCAA Tournament. The team ended up being upset in the second round, despite a 30 point game from Durant. Following this monumental individual season, Durant was awarded the Naismith College Player of the Year, which made him the first ever freshman to be given the honor. Due to his phenomenal freshman year, Kevin decided to forgo the remainder of his college career and enter the 2007 NBA Draft. He was initially drafted with the second overall pick by the Seattle SuperSonics. He had a strong debut season, and when the SuperSonics became the Oklahoma City Thunder in 2008, he was able to grow even more.

In 2008, the team drafted Russell Westbrook, a highly talented guard from UCLA who would eventually form a deadly combination alongside Durant. By the conclusion of the 2008 NBA season, Durant had raised his scoring average to 25.3 points per game. Considering his meteoric rise with the team, many suspected that Kevin had a chance at the Most Improved Player Award, but he ultimately lost to Danny Granger, finishing third in overall voting. During the 2009 season, Durant helped pull the Thunder to the playoffs, which absolutely exceeded the team’s expectations for the season. By the season’s end, he held a scoring average of 30.1 points per game, which made the NBA’s youngest scoring champion of all time. The Thunder unfortunately fell to the Los Angeles Lakers during the playoffs, but this young and talented team was far from finished. 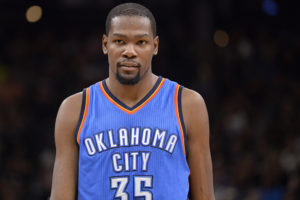 Before the 2010 season, Durant signed a hefty contract five-year contract extension with the Thunder, worth around $86 million. This money was well spent, because during this season, he was NBA scoring champion for a second year in a year. Despite their best efforts, however, Oklahoma City fell to the Dallas Mavericks in the Conference Finals. During the 2011 – 2012 season, Durant had an incredible year, recording his first career 50 point game and being named the NBA All-Star Game Most Valuable Player. With the help of the likes of Kevin Durant and Russell Westbrook, the Oklahoma City Thunder came to the NBA Finals before suffering defeat at the hands of the Miami Heat. They looked to make another championship run in 2012 – 2013 before the team received a devastating blow as Russell Westbrook tore his meniscus during the first round of the playoff. He was out for the remainder of the postseason, and Durant was unable to pick up the extra slack. His team was eliminated in the second round.

The 2013 – 2014 season was arguably Kevin’s best, as he scored a career-high 54 points against Golden State and averaged 32 points per game. Due to his incredible level of play, he was voted the NBA Most Valuable Player. However, he struggled in the postseason and Oklahoma City fell to the Spurs in the Conference Finals. His following season was significantly more underwhelming, as a good deal of his play time was cut short by injury. During his final season with Oklahoma City, Kevin put on a good show. He and Russell Westbrook scored 43 and 48 respective points in a double OT win against the Magic, making them the first to do so since Michael Jordan and Scottie Pippen in 1996. Again, the Thunder fell in the Western Conference Finals, this time against the Golden State Warriors. He ended up coming aboard the Warriors in July of this year, signing a two-year contract worth $54.3 million. Thus far, Kevin has put up an impressive performance with the Warriors. In 22 games., he’s averaging a much higher field goal percentage than normal, and scoring around 26.5 points per game. Even outside of Oklahoma City, Durant still shines.

Looking at his skills on the court and his wealth off of it, it’s not hard to imagine Kevin Durant with a wedding ring. However, a couple of years ago he actually broke off his engagement with Monica Wright, a WNBA star. That being said, Kevin still has a fairly active dating life. Most recently, he was rumored to be seeing Jasmine Shine.

In 2015, Kevin was in his last season with the Oklahoma City Thunder. He was the seventh highest paid player in the NBA with a salary of $20.1 million. Today, Durant is paid closer to $26.5 million by Golden State.

How much does Kevin Durant make per game?

Using that $20.1 figure as a starting point, we can use some simple logic to calculate how much he makes per game. The NBA regular season consists of 82 games, and there’s a possibility of up to 28 games in the postseason, assuming that each round in the playoff goes to seven games. If Kevin’s team doesn’t make the playoff, then he’s making around $245,121 per game. If they somehow have a 110 game season, then that figure gets knocked down to $182,727 per game. The actual figure is probably somewhere comfortably between those two numbers.

Durant is known for being one of the nicest guys in the NBA, and he’s also one of the most charitable. Over the course of his career, he has supported charitable causes such as the American Red Cross, P’Tones Records, My Brother’s Keeper Success Mentors Initiative, Aid Still Required, and Positive Tomorrows. Not only that, but he actually has his own charitable organization, called the Kevin Durant Foundation.