What Happened to Boy George – Recent News and Updates 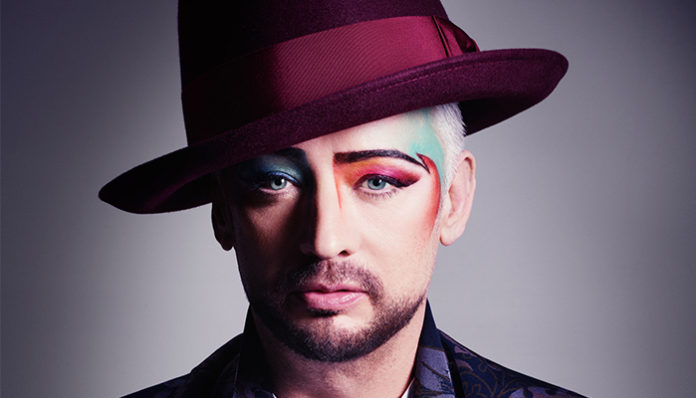 Boy George is an English singer-songwriter who is best known being the lead vocalist of the pop band, Culture Club. A follower of New Romanticism, a pop culture movement that peaked in the early 80’s, George and his flamboyant style attracted him much attention. Going on to participate in a few interviews, he eventually captured the eye of manager Malcolm McLaren of Sex Pistols fame. At the time, McLaren had been looking for a new member for his new group, Bow Wow Wow; feeling that George was the right person for the position, he later invited him to make a few appearances on stage with their vocalist, Annabella Lwin. Although the audiences loved having him, friction soon began to surface between the two personalities. While it didn’t work out in the end, the experience ultimately inspired George to form his own groupーthus, The Sex Gang Children was born. Consisting of four members, they performed for a while prior to changing their name to Culture Clubーa reference to their diverse cultural backgrounds.

Heading straight to the studios, they quickly put together a demo tape and passed it onto a few labels. Although they were initially rejected by EMI Records, they eventually signed a recording deal with Virgin Radios in the United Kingdom and with Epic Records in the United States. From there, they released their debut single, White Boy in 1982; it was shortly followed by I’m Afraid of Me later that year. However, it wasn’t until their third single, Do You Really Want to Hurt Me? that they finally received international fame; to this date, it remains to be one of the biggest hits. Since then, George and his band have released a total of six studio albums, twenty music videos, three EPs and twenty one singlesーincluding Karma Chameleon and Time (Clock of the Heart), both of which were hugely popular during the 80’s. Recognized with a prestigious Grammy Award in 1984, Culture Club has also received two Brit Awards, a Juno Award nomination, two MTV Video Music Award nominations and two American Music Award nominations.

Aside from his work with Culture Club, George has also released a number of records as a solo artist. After the dissolution of the group in the mid 1980’s, he signed with Virgin Records and released his debut album, Sold in 1987. He has since released nine full-length albums, three EPs and forty seven singles. On top of all that, George has also dabbled in acting throughout the yearsーhe made his television debut in 1986 as a cameo in the crime series, The A-Team. Some of the other works which he’s appeared in include Love Story 98 (1998), The Wolves of Kromer (1998), Twice Upon a Time (2006), Animal Charm (2012), and Talks Music (2013).

So what has the talented singer-songwriter been up to as of late? Has he taken on any new projects recently? What happened to Boy George? Where is he now in 2018? 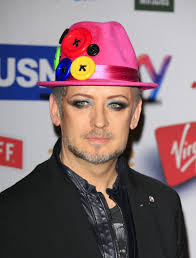 Born on June 14, 1961, in Eltham, London, Boy George (Birth name: George Alan O’Dowd) is the son of Dina and Jeremiah O’Dowd. Although he grew up in a lively household with his five siblings, he often spoke of having a lonely childhood. Wanting to stand out amongst his four brothers, he created an image for himselfーone which involved him wearing androgynous makeup with upscale hairstyles. As a student, George had always preferred the arts to the math and sciences. With his unique style however, fitting in with traditional male stereotypes had always been a challenge, especially in the school setting where peers were often less than forgiving. Frequently finding himself battling against his teachers, he was eventually expelled due to his zany behaviour and “outrageous” appearance.

After his expulsion, George began taking up a number of odd jobs to help make ends meet; he worked as a fruit picker, a make-up artist and even as a milliner. By the time he was in his early twenties in the 1980’s, the New Romantic Movement had peaked in popularity within the UKーno longer was his eccentric style “outside of the norm.” Marked by exaggerated use of makeup and outfits, the pop culture movement was a perfect match for George’s flamboyant style; before long, he was given interviews solely based on his appearance. It was around this time, that he crossed paths with Malcolm McLarenーthe manager of the punk rock band, Sex Pistols. Having been on the look out for a new member for his second group Bow Wow Wow, he saw George as a perfect fit; he eventually invited him to appear on stage with their singer, Annabella Lwin, whom he’d felt needed someone to give her more of a vocal presence.

Although the on stage appearance was a success, friction soon surfaced between George and Lwin, causing him to leave the group. While the opportunity didn’t work out, the experience ultimately inspired him to form his own pop band called The Sex Gang Children with a few friendsーJon Moss, Mikey Craig and Roy Hay. After a few performing a few gigs together, they eventually changed their name to Culture Club. 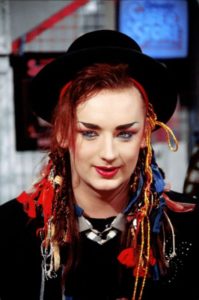 After securing a recording deal with Virgin Records in the UK, Culture Club released their first studio album entitled, Kissing to be Clever in October 1982. Produced by Steve Levine, it was a critical successーhaving been met with generally favourable reviews upon its release. Given a nine out of ten rating by critics at Smash Hits Magazine, it featured ten tracks including Do You Really Want to Hurt Me, which quickly became known as their breakthrough hit; a few other titles from the disc includes You Know I’m Not Crazy, I’ll Tumble 4 Ya, Take Control, I’m Afraid of Me and White Boys Can’t Control It.

Eventually going on to spawn a total of five singles, Kissing to be Clever peaked at number five in their native UK, and at number fourteen on the Billboard 200; a global success, it also charted within the top ten in multiple other countries including Austria, Canada, France, Germany, Japan, New Zealand and Sweden. Certified Platinum in the UK, the album has since sold over five million units across the globe.

The next year, the British band released this second studio album, Colour by Numbers in October 1983. Even more successful than their initial effort, it debuted at the top of the UK Albums Chart and also made its way to number two on the US Billboard 200. Critically praised all around for being “an artistic and fun” album, it contained ten new wave tracks including Changing Every Day, That’s the Way (I’m Only Trying to Help You, Mister Man and Stormkeeper. Featured in Rolling Stone’s list of “100 Best Albums of the 1980’s”, Colour by Numbers went on to produce five singles including the Platinum certified number one hit, Karma Chameleon. Also listed in the book of “1000 Albums You Must Hear Before You Die”, the album saw much overseas success, having peaked at number one in Australia, Canada, Japan, and the New Zealand. Since its original release, Colour by Numbers have sold over 16,000,000 copies worldwide and has received 3x Platinum certification in the UK and 4x Platinum certification in the US.

Carrying on with their annual album release, Culture Club released Waking Up with the House on Fire in October 1984. Although the title track received much critical acclaim upon its release, the album didn’t achieve the same caliber of success as the band’s preceding efforts. Met with generally negative reviews and self-admitted by the band to be a “halfhearted effort”, its two-sided disc featured a total of ten songs including Dangerous Man, Unfortunate Thing, Mannequin and Hello Goodbye, amongst others. Despite having been less-than-ideally received, Waking Up with the House on Fire did secure the number two position on the UK Albums Chart; it also charted impressively in Australia, France, Japan, Spain and Norway. Eventually going on to spawn three singles, The War Song, The Medal Song and Mistake No. 3, the album has since sold over a million copies in the United Statesーmaking it their third RIAA certified record.

Prior to their eventual decline in the 90’s, the band released their fourth studio album, From Luxury to Heartache in March 1986. Recruiting the help of veteran music producer Arif Mardin in attempts to revitalize the group’s sounds, the album boasted ten tracks including Gusto Blusto, God Thank You Woman and Move Away, which were later released as singles. Despite their efforts however, From Luxury to Heartache performed disappointingly compared to their earlier albums. Around the time of its release, George’s addiction to drugs also surfaced; it was later confirmed that his drug issues were one of the major reasons behind the delay of the album. While it didn’t replicate the charting success of their previous efforts, From Luxury to Heartache did manage to peak at number ten in the UK. A year after the release of the album, the band disbanded. 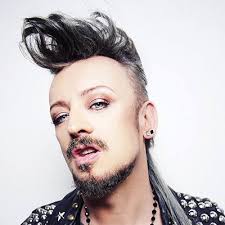 After parting ways with his former bandmates, George signed with Virgin Records and began embarking on a solo music career. He released his debut album, Sold in June 1987, just a year after the dissolution of Culture Club. Met with much success in Europe, the album showcased eleven dance pop tracks including Where Are You Now (When I Need You), Little Ghost, Just Ain’t Enough and Keep Me in Mind; it later went on to produce the number one hit, Everything I Own, which remains to be one of his most popular songs to this date. Although Sold was critically acclaimed in Europeーespecially in Italy, it did not fare well in the United States as the singer wasn’t able to promote the album there due to various drug-related restrictions. As a result, it only managed to chart at number 145 on the Billboard 200.

Since then, George has released eight more full-length albums, however none of them have replicated the success of Sold thus far.

What Happened to Boy George – News and Updates

This past summer, George and the rest of his Culture Club bandmates reunited and embarked on a full worldwide tour, much to the excitement of fans. Originally announced in April 2016, the full tour was the first in over a decade for the group, whose last album together had been back in 1999. The highly anticipated event kicked off in Australia and have since brought the members to United States, Mexico, Canada and Asia. Although the original reunion tour ended back in June, the group have since come back together for a series of encore shows in Australia, which are still ongoingーaccording to their official website, they will continue until December 11th, 2016 at the Myer Music Bowl in Melbourne.

If you’d like to stay connected with the musician of Culture Club fame, you can do so by following him on Twitterーyou can find him at @BoyGeorge.