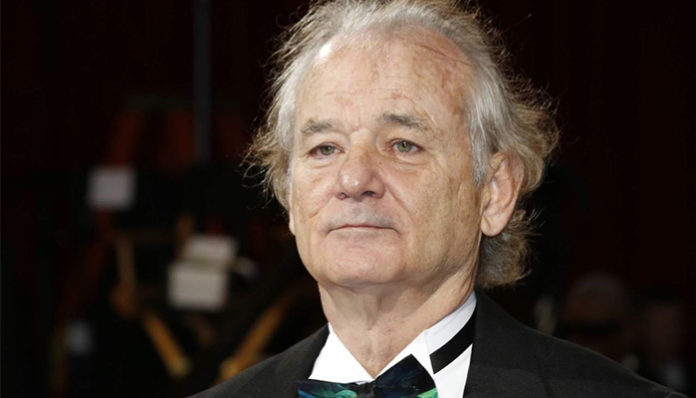 Bill Murray’s popularity began to peak in the late 70’s when he starred in the late-night comedy, Saturday Night Live. As a teen, he took part in the community theatre and was also involved in the local music scene as the vocalist of a rock band. Although he ran into some trouble during his late adolescence, Murray later managed to get his life back on track by the time he was in his early twenties. Along with his older brother Brian, he later joined an improvisational comedy troupe in the early 1970’s. Eventually moving to New York City, he landed a gig with a radio show called, The National Lampoon Radio Hour. From there, he participated in an Off-Broadway production of, Lampoonーit was there that he was approached by sports journalist, Howard Cosell. Recognizing his talents, he soon invited Murray to join the cast of his variety show, Saturday Night Live with Howard Cosell. Following the series’ cancellation after a season, he eventually was able to join the cast of NBC’s Saturday Night Live in 1977.

Known for his comedic acts, Murray quickly rose to fame in the late 1970’s; his efforts were later recognized with a Primetime Emmy Award for “Outstanding Writing in a Comedy-Variety Series.” Gradually branching out to the big screen, he made his film debut in the comedy, Coming Attractions (1978), although he didn’t receive a major role until the next year, in Meatballs (1979). Throughout the next decade, he continued to appear in a number of movies including Where the Buffalo Roam (1980), Caddyshack (1980), Tootsie (1982), Ghostbusters (1984), Little Shop of Horrors (1986), and Scrooged (1988), to name a few. Since then, he has been involved with over 80 different projects as an actor. Well-known in the entertainment scene, Murray has received countless industry awards over the years; to date, he has accumulated two Primetime Emmy Awards, two Satellite Awards, a Golden Globe Award, and a BAFTA Award, amongst numerous others. In fact, just this year, he was honoured with the Mark Twain Prize for American Humor.

Outside of his work in the entertainment industry, Murray is also a co-owner of an independent semi-professional baseball team called the St. Paul Saints. As such, it’s not uncommon for him to travel to Saint Paul, Minnesota from time to time to watch his team play on the field. In addition, the actor is also currently a part-owner of the minor league baseball teamsーthe Hudson Valley Renegades and the Charleston Riverdogs. Previously, he has also invested in the Fort Myers Miracle, Utica Blue Sox, and Catskill Cougers.

So what has the veteran actor/comedian been up to recently? What has he been working on as of late? What happened to Bill Murray? Where is he now in 2018? 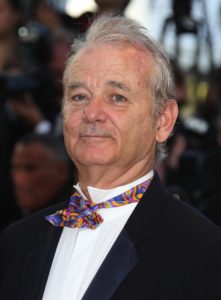 Born on September 21, 19650, in Evanston, Illinois, Bill Murray (Birth name: William James Murray) is the son of Edward Joseph Murray II and Lucille Collins. Raised as a Roman Catholic in the suburbs of Chicago, he was raised with his eight brothers and sistersーthree of whom are also actors. During his childhood, Murray enjoyed reading about American heroes such as Davy Crockett, Wild Bill Hickok and Kit Carson. As a teen, he went to the co-ed college preparatory school, Loyola Academy in Wilmette, Illinois.

In order to fund his education, he worked as a part-time golf caddy; it was then that he developed a keen interest in golfーsomething which he enjoys immensely to this day. With an ear for music, Murray was also the lead vocalist of a rock band known as the Dutch Masters. Together with his bandmates, he performed at various community theatres during his adolescent years. Following his high school graduation, he moved to Denver to enrol at Regis University; however, he ultimately dropped out and returned to Illinois shortly afterwards.

On his twentieth birthday, Murray collided with the law when he was caught trying to smuggle 10 pounds of marijuana at the Chicago Airport. Convicted, he was eventually sentenced to to probation.  Unsure on which direction to take in life, he later accepted an invitation from his older brother, Brian, to join the improvisational comedy troupe, The Second City. When he was twenty four, he relocated to New York City, where he quickly landed a gig as a featured player on the comedy radio show, The National Lampoon Radio Hour. The following year, Murray took part in an Off-Broadway production of Lampoon. It was during this time that he caught the attention of Howard Coswell, who impressed by his comedic talents, invited him onto his show, Saturday Night Live with Howard Cosell (1975)ーthus, Murray appeared on national television for the first time. Although Cosell’s variety series was eventually cancelled after one season, it had given Murray enough exposure to land him a regular part on NBC’s, Saturday Night Live (1977). 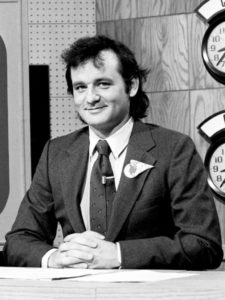 Initially broadcasted on NBC in the fall of 1975, Saturday Night Live was a late-night sketch comedy created by television producer, Lorne Michaels. Developed with the help of Dick Ebersol, it is known for parodying a variety of topics in contemporary culture; each episode also typically features at least one celebrity guestーwhom usually begins by performing an opening monologue.

Immensely popular amongst viewers, Saturday Night Live quickly developed a cult following its release. After two seasons of being on air, key cast member, Chevy Chase left the show; looking for a replacement, the producers then invited Murray, a relatively unknown comic actor at the time, to replace Chase. Although it was his first major television appearance, it didn’t take long for him to capture the hearts of audience members with his comedic stunts and humour. In 1977, Murray was recognized with a prestigious Primetime Emmy Award for “Outstanding Writing for a Variety, Music or Comedy Program.”

Gradually branching out to film, he appeared in the comedy, Coming Attractions in 1978. However it wasn’t until the next year, that he received his first major on-screen role in Meatballs (1979) alongside Harvey Atkin and Kate Lynch. Released in theatres on June 29th, 1979, the comedy flick centred around the wacky adventures of a group of campers and counsellors at a cut-rate summer camp; in the movie, Murray played the role of Tripper Harrison, the campsite’s head counsellor. Filmed at Camp White Pine near Haliburton, Ontario, Meatballs was a commercial success; it received generally positive reviews and managed to gross over $43 million from a $1.6 million budget during its theatrical run. Although some criticized its oversimplified plot, others praised it for the cast’s comedic performances. For his portrayal of Tripper, Murray received a Genie Award nomination for”Best Performance by a Foreign Actor” later that year.

In 1984, Murray starred in the supernatural comedy film, Ghostbusters. Produced and directed by Ivan Reitman, it centred around three peculiar parapsychologistsーEgon Spengler, Peter Venkman, and Raymond Stantz (played by Harold Ramis, Bill Murray and Dan Aykroyd respectively), who begin a ghost-catching business in New York. Upon its release in theatres on June 8th, 1984, Ghostbusters  grossed over $13 million during its opening weekend; it ultimately ranked number one at the box office for five consecutive weeks. Universally acclaimed, the movie received overwhelmingly positive reviews from critics, many commending it for its perfect blend of comedy and special effects. One of the best-performing comedies of the 80’s, Ghostbusters eventually went on to gross over $295.2 million worldwide. Nominated for several awards, including two for the Academy Award, it also earned Murray a Golden Globe Award nomination for “Best Actor in a Motion Picture Musical or Comedy.” 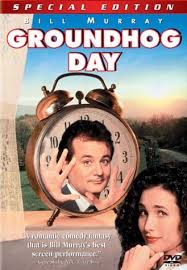 Following a series of film appearances in the 1980’s, Murray was cast as the lead character in the fantasy-comedy, Groundhog Day (1993). Based on a story written by Danny Rubin, it revolved round an arrogant Pittsburgh weatherman, Phil Connors, who finds himself trapped in a time loop after being tasked to cover the annual Groundhog Day event. Positively received upon reaching the theatres, Groundhog Day grossed over $70 million within North American alone.

Included in the United States National Film Registry for its “historically, culturally and aesthetically significance”, it also featured Andie MacDowell, Chris Elliott and Stephen Tobolowsky in main roles. The thirteenth highest-grossing film of 1993, it eventually went on to win a British Comedy Award that same year. As for Murray, his performance in Groundhog Day also garnered him a Saturn Award nomination and an MTV Movie Award nomination.

Five years later, the actor received a big break when he was cast as a starring role in the comedy drama film, Rushmore (1998). Opened in theatres on October 9th, 1998, it told the story of Max Fischer (played by Jason Schwartzman), an eccentric teenager who befriends a wealthy industrialist named Herman Blume (played by Murray); as they grow to know each other better however, they eventually realize that they’ve fallen for the same woman, a school teacher named Rosemary Cross (played by Olivia Williams). While Rushmore was only a moderate commercial success, having grossed a little over $17 million from a $9 million budget, it has been considered to be one of Wes Anderson’s greatest works. Ranked as one of the best films of the 90’s by multiple publications, it was later selected to be included in the United States National Film Registry. Critically acclaimed, Murray’s performance in the movie also earned him much positive attention; for his acting, he received an American Comedy Award, a Satellite Award, a New York Films Critics Award, an Independent Spirit Award, amongst several others.

In 2003, Murray received yet another big breakーpossibly the greatest of his career−when he was cast in the romantic comedy, Lost in Translation. Released in theatres on October 3rd, 2003, it followed Bob Harris, a faded movie star (played by Murray) who arrives in Japan for the filming of a whisky advertisement; he later crosses paths with a neglected young woman named Charlotte (played by Scarlett Johansson). Despite having been produced on a $4 million budget, Lost in Translation became a major box office hit, grossing over $119 million worldwide. Showered with positive reviews, it earned the actor well over a dozen different industry awards, including a prestigious Golden Globe for “Best Actor in a Motion Picture – Musical or Comedy.” 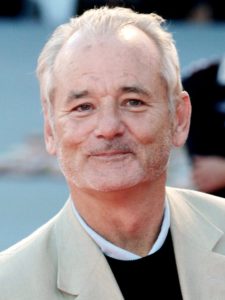 Nowhere near retirement, Murray is currently busy working on an upcoming animated comedy called, B.O.O.: Bureau of Otherworldly Operations (2017). Written by Tom Wheeler, it will depict the adventures of the B.O.O.ーan agency dedicated to protecting humans from evil hauntings and spirits. Although the actor’s exact role in the film has not yet been announced, he will presumably be lending his voice to one of the major characters of the movie.

Aside from that, he will also be starring in Wes Anderson’s new stop-motion animated film about dogs. Set for a 2018 release, it will also feature the voices of Edward Norton, Bryan Cranston, Jeff Goldblum and Bob Balaban.