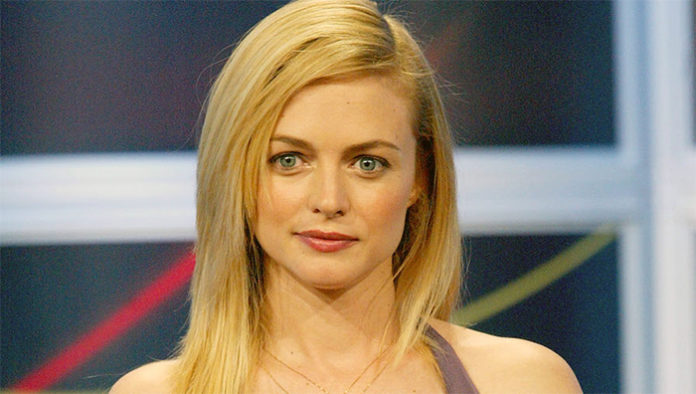 Heather Graham is an American actress first broke into the show business in the teen comedy film, License to Drive (1988). Despite her shy nature as a child, Graham had always had a passion for acting. Ultimately wanting to pursue a career as an actress, she attended a number of auditions throughout her adolescence. Later relocating to Los Angeles in attempts of putting herself out there in the country’s entertainment capital, eventually made her official television debut in the family comedy, Growing Pains (1987) at the age of seventeen. Later that same year, she also appeared in a TV film, Student Exchange (1987) alongside Todd Field, Viveka Davis and Gavin MacLeod. In 1988, Graham received her first starring role in the comedy flick, License to Driveーone that helped to establish her place as an up-and-coming star in the entertainment industry. The following year, she landed yet another part in the crime drama film, Drugstore Cowboy (1989), which proved to be a box office success. From there, the blonde continued to appear in a handful of movies including Shout (1991), Diggstown (1992), Six Degrees of Separation (1993), and Swingers (1996).

In 1997, Graham received yet another break when she was cast as one of the principal characters in the movie, Boogie Nights (1997). Well received, her portrayal in the drama earned her an MTV Movie Award for “Best Breakthrough Performance”. Carrying on with her burgeoning career, she then played the female lead in the spy movie, Austin Powers: The Spy Who Shagged Me (1999). Her next major appearance came in 2006, when she co-starred in Emilio Estevez’s film, Bobby alongside Harry Belafonte, Nick Cannon, Joy Bryant, Lindsay Lohan, and various others. An experienced and talented actress, Graham has won several accolades throughout the years including a Hollywood Film Award (e.g. Ensemble of the Year), a ShoWest Award (e.g. Female Star of Tomorrow), a Florida Film Critics Circle Award (e.g. Best Ensemble Cast), amongst many nominations.

What has sheーwho has been praised by many big-name publicationsーbeen up to in the recent years? Is she still actively filming movies and television shows? If so, what are some of her latest roles? What happened to Heather Graham? Where is she now in 2018?

Heather Graham’s Early Life and Entry Into the Show Business 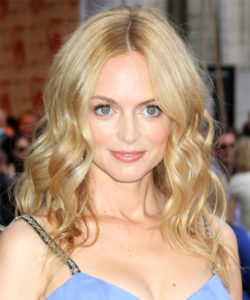 Born on January 29, 1970 in Milwaukee, Wisconsin, Heather Joan Graham is the daughter of Joan Bransfield, a school teacher and author, and James Graham, a former FBI agent; she is three-quarters Irish and has a younger sister named Aimee Graham, who is also an actress. Due to her father’s work, she moved around frequently growing up; as a result, Graham was quite shy as a young girl. Despite her reserved nature however, acting was always something that she wanted to pursueーever since she took part in a production of The Wizard of Oz during grade school. After relocating repeatedly, her family settled down in Agoura Hills, California, when she blonde was none years old.

Known as the “Theatre geek” by her peers, Graham had her eyes set on becoming a star. Voted as “Most Talented” by her high school class, she started to embark on an acting career following her graduation. While acting was her passion, it unfortunately created tension in her family; nonetheless, her mother frequently drove her to various auditions during her teen years. Later moving to Los Angeles, in an effort to close the distance between herself and her acting dreams, she went to the University of California where she studied drama.  Wanting to focus her attention wholly on acting however, she eventually dropped out of college after a period of two years. In 1987, she landed her first professional role in the television series, Growing Pains. Continuing to attend auditions, she also appeared in the TV film, Student Exchange (1987), later that same year.

While her career initially didn’t take off as fast as she’d hoped (she only attended UCLA after struggling to secure roles), she soon received a break in 1988 when she received her first starring role in the teen comedy flick, License to Drive. 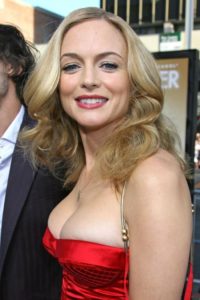 Written by Neil Tolkin, License to Drive revolved around Les Andersonーa teen who despite having failed his driver’s test, decides to drive his friends around town at night. The actress’ first major role since her debut, she starred as Mercedes Laneーa young girl whom Anderson eventually falls in love with during the course of the movie. Aside from Graham and Corey Haim, who played the part of the reckless driver, the motion picture also featured actors Corey Feldman, Carol Kane and Richard Masur.

In production since the winter of 1987, License to Drive made its way to theatres on July 6, 1988. Popular amongst theatre-goers, the comedy eventually grossed more than $22 millionーclose to three times that of its production budget of $8 million. In spite of its financial success however, reactions to the movie were generally divided; while its humour and story were enjoyed by many, some critics were criticized the plot for its predictability. Still, License to Drive garnered Grahamーwho was still a relatively unknown artist at the timeーa Young Artist Award nomination for “Best Young Actress in a Motion Picture Comedy” in 1989.

Continuing with her acting, Graham then worked with director Gus Van Sant in the crime drama film, Drugstore Cowboy (1989) the following year. Based on an autobiography written by James Fogle, it depicted the story of Bob Hughes (played by Matt Dillon)ーa drug addict who supports his habits by robbing various pharmacies and hospitals while traveling across the Pacific Northwest; he is accompanied by his wife, Dianne (played by Kelly Lynch), close friend Rick (played by James LeGros), and an underage girl with an unknown past (played by Graham). Aside from the aforementioned actors, Drugstore Cowboy also starred Max Perlich, James Remar, William S. Burroughs and Grace Zabriskie.

Screened on October 6, 1989, Drugstore Cowboy was well received despite haven been produced on a lower budget of $2.5 million. By the end of its theatrical run, the film had grossed more than $4.7 million in the United States aloneーnot including the earnings that it took in overseas. Critically acclaimed, the movie was overwhelmed with positive reviews; in fact, it holds an extremely rare rating of 100% on Rotten Tomatoes. Lauded by viewers and critics alike, Drugstore Cowboy was also hailed as being “One of the Top 10 Movies of 1989” by contemporary critics, Roger Ebert and Gene Siskel. Taking home an award for “Best Screenplay” from the L.A. Film Critics Association, Graham’s stunning performance in the movie also earned her an Independent Spirit Award nomination or “Best Supporting Female” the next year. 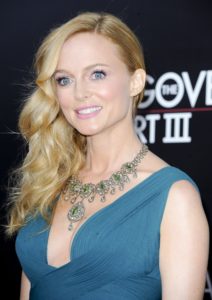 In 2009, Graham co-starred in The Hangoverーperhaps one of the greatest box office hits that has come her way since her debut. Written by Scott Moore and Jon Lucas, it revolved around a group of close friends who after travelling to a bachelor party in Las Vegas, find themselves waking up the next the morning with no recollections whatsoever of the previous night; they do know however, that they must find the groom before the wedding. A member of its ensemble cast, the actress took on the role of Jadeーa stripper and escort whom one of their friends, Stuart Price, marries despite the fact that he is already been in a long-term relationship. Other actors of the main cast include Bradley Cooper, Ed Helms, Zach Galifianakis, Justin Bartha and Jeffrey Tambor.

Filmed over two weeks in Nevada, The Hangover was released in theatres on June 5, 2009, after an initial premiere at The Hague. A massive success, the comedy grossed over $16 million on its first day across 4500 screens; it later earned more than $44 million in its opening weekend in the United States, taking the number one spot at the box office. The ninth highest-grossing movie of its year, it received many positive reviewsーmany of which lauded it for its brilliant directing and laughter-invoking humour. Named as one of the best films of 2009 by the American Film Institute, The Hangover later won a Golden Globe Award for the category of “Best Motion Picture – Musical or Comedy”. To date, it remains to be one of the biggest blockbusters that Graham has been a part of.

Four years later, Graham reprised her role as Jade in the third sequel, The Hangover Part III (2013). The final instalment of the series, it centred around the friends after one of their own has been kidnapped by a prison-breaker, a gangster known as Mr. Chow (played by Ken Jeong); as they try to move forward with their rescue mission however, something from their past comes back to haunt them. Welcoming back most of the original cast, The Hangover Part III also saw the return of Bradley Cooper, Ed Helms, Zach Galifianakis, and Jeffrey Tambor.

Released theatrically on May 23, 2013, The Hangover Part IIIーsimilar to its predecessorsー was a huge commercial success. Over its opening weekend, it managed to earn over $41 million in the United States; it later went on to gross more than $362 million worldwide by the end of its run. In spite of its earnings however, it was generally panned by critics for diverting from the series’ “rote formula”. Nonetheless, it received a number of awards including a Golden Trailer Award for “Best Comedy” following its release.

One of the many projects that Graham will be appearing in this upcoming year is the drama film, Last Rampage (2017). Directed by Dwight W. Clarke, it will tell the real life story of the infamous prison break of Randy Greenwalt and Gary Tison. Besides the actress, who will be playing the main female lead, it will also star Robert Patrick, Molly C. Quinn, John Heard, Jason James Richter and Bruce Davison.

On the small screen, she has been cast as a series regular in the 2017 comedy, Bliss. While no details have been released as of yet, we do know that Graham will be appearing in at least six episodes; she will also be joined by Jo Hartley, Oscar Kennedy, Goran Kostic and Stephen Mangan.

Want to stay connected with the blonde? You can do so by following her on Twitter at @imheathergraham.