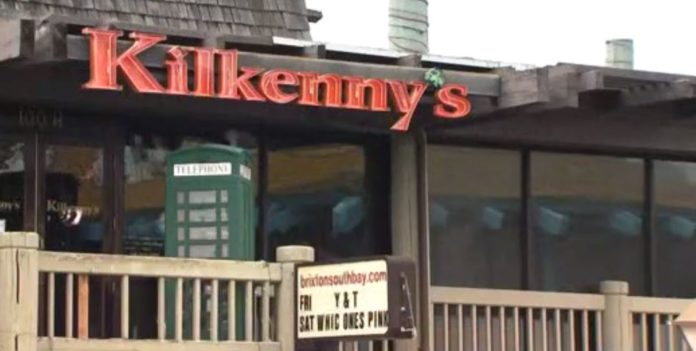 In 2006 sisters Allie and Alexis Speed pooled together their money from inheritance to open a bar in California’s Redondo Beach. Allie had just finished college and the bar where she first worked shut its doors hence her decision to open one of her own. During its early weeks the bar enjoyed wave upon wave of customers until it started going downhill due to the inexperience of the sisters in handling such a business, coupled by the incompetence of Allie’s ex-boyfriend Carlos who serves as the bar’s general manager.  Allie was mostly left to manage the bar as Alexis juggled her work with night school.

As the bills piled up, the debt skyrocketed to almost a million bucks, and the customers dwindled, the sisters decided to call Bar Rescue for help before it’s too late.

Nicole Taffer visited Kilkenny’s to evaluate the bar on a customer’s perspective. From her recon she learned that the bar was unkempt and had nothing “Irish” about it, from its inedible food to the décor, despite being advertised as such.  She also saw Allie hanging out and drinking with the customers and, based on her appearance and behavior, she was more of a patron than a co-owner. Jon Taffer then personally entered the bar and saw that there were barely any customers considering it was a Saturday night, the staff not being cohesive, and Carlos demanding to leave despite his shift not being over yet. It also appeared that Carlos was more in charge than Allie herself.

Taffer met with the sisters and made them see the conflicting décor on the bar which made it hard to pinpoint what exactly Kilkenny’s was. He then invited two experts to help him with this endeavor namely executive chef Josh Capon and expert mixologist Michael Tipps.

The experts began their tour of the bar. Tipps wanted the bar area cleaned up as it was littered with clutter and the personal stuff of employees, not to mention having a very uninviting ambiance. Capon saw how filthy the kitchen was with utensils hanging on the garbage and rusty ice machines that were used for drinks, plus the improper preparation of raw meat. Taffer confronted a very disrespectful Carlos and the general manager was confident that he was not going to be pursued by creditors unlike the sisters if the bar goes south. Carlos’s detachment from the bar’s operations was in full view and Taffer wanted the man to take responsibility for what happened to the once-renowned place.  The sisters also roused Taffer’s ire as they had no financial statement in the bar and had to work on it on their home computer.

Capon trained the bar’s head chef with proper food preparation and the creation of better meals for a revamped menu. Tipps tested the skills of the bartenders and learned that Kilkenny’s was short of crucial equipment and ingredients for profitable drinks. The staff revealed that Carlos doesn’t purchase what the bar needed.  Tipps then trained the bartenders with unique cocktails after acquiring the needed supplies. Taffer sat with the management and saw how inept Carlos was when it came to managing the books. Carlos took it personally and walked out of the meeting. Taffer told the sisters that the irresponsible man was nothing but dead weight to the bar.

Kilkenny’s had a soft opening two days prior to the reopening. Customers flooded in and the bartenders were pressed to prepare the new drinks in large numbers. The kitchen had some confusion with the tables and the orders took too long to be served which forced some hungry customers to leave the bar. Carlos was not performing his duties as a general manager and even went as far as to blame Tipps on the problems with the bartenders. Tipps labeled Carlos as the “cancer” of the bar and Taffer saw that the general manager was ruining Bar Rescue’s efforts. Past these problems the customers had nothing but praise for the meals in the new menu. After the soft opening Taffer again confronted the sisters and gave them an ultimatum on what to do with the incompetent Carlos.

The bar’s renovation commenced the next day with a focus on turning it into a beach-appropriate establishment. The end result led to the transformation of Kilkenny’s Irish Pub into the Breakwall Bar and Grill and Surf BBQ. The façade sported bright colors with a blue surfboard as their new logo. Inside the bar now stood surfboard-shaped tables that ensured proper flow of patrons around the bar, and shiny tabletops to “reflect” the view of the beach outside. Bartenders were now decked with a point of sale system which replaced their ancient cash register. Their new menu was tailored to emphasize the bar’s best-sellers. Unfortunately, with all these changes and improvements, Carlos was still not on the same boat with Taffer and Bar Rescue. Allie finally decided to take control of the bar with an iron grip and delegated Carlos to a lesser position.

Breakwall opened its doors and the customers loved everything in it. Within an hour the bar managed to sell thrice as much as it did on the same night last week. The point of sale system boosted the serving time of the kitchen staff from 30 minutes down to 11. Taffer left the girls not only with a new bar but with renewed confidence in their abilities.  Carlos eventually softened up and accepted the changes in the bar.

Bar Rescue’s work on Breakwall proved to be a success with customers ranging from ages 21 to 60 flocking to the bar. Unfortunately as time passed the reviews became negative again and in January 2012 the bar withdrew its liquor license. Two months later they finally closed the doors with Allie stating that the business was difficult to maintain. Their social media accounts are no longer active as well.

Some of the online reviews mentioned that the management dismissed Bar Rescue’s counsel and returned to how they used to operate, coupled with inexperienced staff and a certain male manager who refused to take responsibility. And of course there are those who blamed Taffer and Bar Rescue for the downfall of Kilkenny’s / Breakwall.

Around January 2014 a branch of gastropub chain Barney’s Beanery opened in the former site of Breakwall. The sisters now have babies of their own and Carlos is now apparently married and in good terms with Allie as he appears on pictures with her husband and baby.