The Biggest Stadiums in the World – Introduction

It’s no secret that sports are popular. In pretty much every country in the world, there exists at least one sport that everyone will gather around to watch. And where do people go to watch those sports? In stadiums. Over the last few years the size and scale of these stadiums have increased immensely so what are some of the largest stadiums out there? So now that it’s 2017 I think it’s time we take a look at some of the largest stadiums in the world. Let’s find out what these modern day testaments to sport are used for, how many people they can seat, and who mostly plays there. Without further ado, let’s see if we can’t learn some more about the largest stadiums in the world. 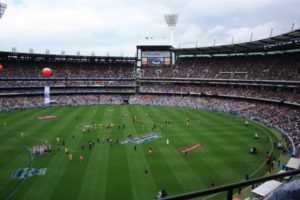 We start our list off with the Melbourne Cricket Ground, a sporting stadium located in Melbourne, Australia. As you can probably infer from its name, it’s a cricket ground, and it’s actually the largest cricket ground in the world. Outside of that, this stadium also holds the honor of being the largest stadium in the southern hemisphere. Originally opened way back in 1853, this stadium has an official capacity of 100,024. It is used primarily for cricket (but is also occasionally used for standard football), with its main tenants being the Australian national cricket team, the Victorian Bushrangers, the Melbourne Stars, the Melbourne Cricket Club, the Richmond FC, and others. 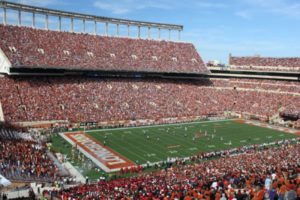 The next stadium on our list takes us to Texas, more specifically to Austin. I’m sure you’ve heard the phrase “Everything’s bigger in Texas,” and that is certainly the case with this college football stadium. Darrel K Royal-Texas Memorial Stadium is one of the largest college football stadiums around, but it isn’t actually the largest in the entire state of Texas. The venue is used primarily by the University of Texas at Austin Longhorns, which means that this is also the largest football stadium in the Big 12 NCAA conference. Darrel K Royal-Texas Memorial can hold up to 100,119 people, and its current attendance record sits at 102,315 total spectators. 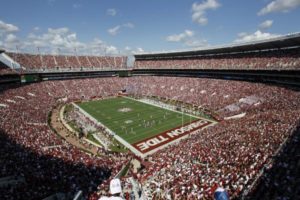 The University of Alabama is home to one of the most dominant college football programs of all time, and they are also home to one of the largest college football stadiums of all time. Bryant-Denny Stadium (named after former school president George Denny and former head coach Bear Bryant) is used by the University of Alabama’s Crimson Tide football team, and it is capable of holding up to 101,821 people. This seating capacity may seem really impressive, but it’s actually just the fourth largest stadium in college football’s Southeastern conference. During odd-numbered years, this stadium is also used to host the state of Alabama’s high school football championship games. 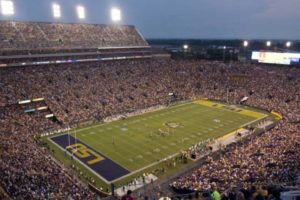 I mentioned before that the University of Alabama didn’t have the largest stadium in the Southeastern conference. Tiger Stadium is one of those largest Southeastern conference stadiums. Also known as Death Valley, this stadium is primarily used by Louisiana State University’s Tigers. This Baton Rogue stadium is capable of holding up to 102,321 people, and that is a capacity that they have managed to reach four times thus far. The stadium was first built in 1924, and several expansion projects have allowed it to become the third largest stadium in the Southeastern conference. A fun fact about Tiger Stadium is that, when it is filled to capacity, it is actually the fifth largest “city” in Louisiana, by population alone. 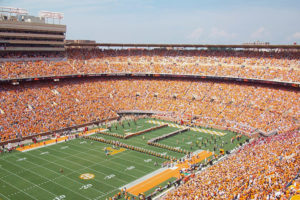 Located in Knoxville, Neyland Stadium is home to the University of Tennessee Volunteers. The stadium is primarily used by this team during college football games, but its large size also makes it a popular venue for conventions and, on occasion, professional football games. The stadium is named after Robert Neyland, a former Tennessee football coach who would go on to hold the record for most wins in the team’s history. It was named Shield-Watkins Stadium prior to its renaming in 1962. Neyland Stadium can hold up to 102,455 people, and they obtained that capacity following some expansions that they completed way back in 2010. Their record attendance currently sits all the way up at 109,061, which they obtained in a game against Florida way back in 2004. 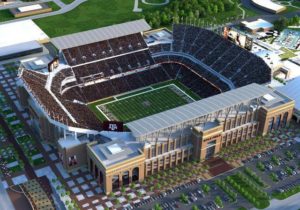 With this entry, we return to the Lone Star state. Texas is home to the Longhorns, but it’s also home to the Texas A&M University Aggies. The Aggie play in Kyle Field, which is named after Edwin Jackson Kyle, a former athletics director for the school. The stadium itself was built way back in 1927, and its capacity currently sits at 102,733 people. They reached record attendance in a 2014 game against Ole Miss, which drew in 110,631 people total. They are, without parallel, the largest stadium in the Southeastern football conference. The numbers don’t lie, but it’s worth noting that Kyle Field has a reputation for being an imposing venue for the game. Also known as “Home of the 12th Man”, this is a place where crowd noise is often a major factor. 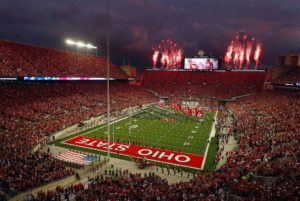 I don’t think that I should have to tell any American football fan that Ohio is an important state for the sport. Ohio Stadium, also known as The Horseshoe, is home to the Ohio State University Buckeyes. The Buckeyes are one of the more popular and decorated teams in football, so I suppose it’s fitting that they would have a stadium to match. Ohio Stadium is so large that it is also frequently used for concerts, and it has seen acts from the likes of U2 to Pink Floyd. It can currently sit up to 104,944 people, and their record attendance has been 110,045. They hit this milestone in a game against the University of Michigan just in 2016. Ohio Stadium was first opened way back in 1922, and since then it has become a cornerstone of Ohio’s sports culture. It remains that significant today. 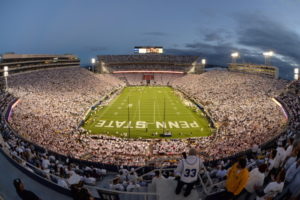 Believe or not, though, Ohio Stadium is not the largest stadium in its conference. Beaver Stadium is used by the Pennsylvania State University Nittany Lions, another Big Ten conference team. (I know what you’re thinking. The Beaver in the name isn’t referring to the team. It is referring to James Beaver, a former Pennsylvanian governor.) Beaver Stadium has an official capacity of 106,572 people, which makes it the second largest stadium in the entire western hemisphere. Beaver Stadium first opened up in 1960, and the Nittany Lions have a lot of history with this place. Like many of the stadiums on this list, Beaver Stadium is known for being a tough place for away teams, with a loud and enthusiastic student section on Penn State’s side. The Nitanny Lions reached their record attendance in a 2002 game against Nebraska, where they drew 110,753 people. 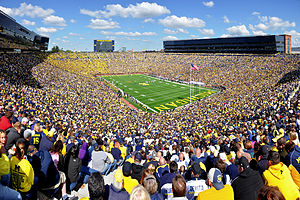 Michigan Stadium, home to the University of Michigan Wolverines, holds many honors. It is the largest stadium in the Big Ten conference, and in all of college football. Not only that, but it is the largest stadium in the entire western hemisphere. Michigan’s stadium originally had a capacity of a little over 70,000 when it first opened in 1927, but even back then it was designed with the intention of expansion. Today, Michigan Stadium is capable of holding 107,601 people. It has passed that number on occasion, though, and its record attendance currently stands at 115,109. This record was obtained in a 2013 game against Notre Dame. The stadium currently holds the NCAA single-season record for average home game attendance, drawing in an average of 112,252 people per game during the 2012 season. The University of Michigan has a storied athletics program, so I guess it makes sense that their stadium would be so massive. 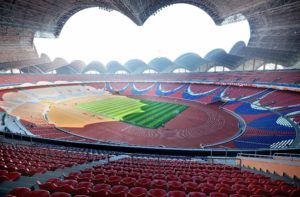 I know that this list has been largely dominated by college football stadiums, but the largest stadium in the world doesn’t actually belong to any university. This is located in Pyongyang, North Korea. The stadium was just recently built back in 1989, and it can officially hold up to 114,000 people. This North Korean stadium holds many events, and it is largely used for parades, shows, and the annual Arirang Mass Games. The Rungrado 1st of May Stadium is also sometimes used by the North Korea national football team and the North Korea women’s national football team. The stadium was just recently renovated in 2015. This monstrous stadium takes up a lot of space, too, with its official size currently standing at around 51 acres. The stadium has many purposes, which I suppose is only fair when you consider how ridiculously big this place is.