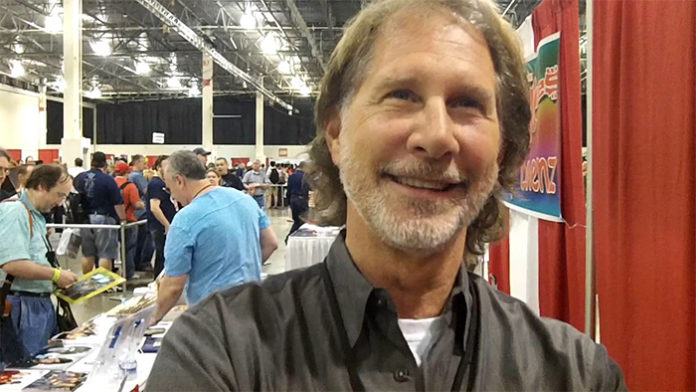 American actor Parker Stevenson first rose to prominence as Frank Hardy in the TV series, The Hardy Boys/Nancy Drew Mysteries (1977). Born and raised in Philadelphia, he caught the acting bug early from his mother who used to be an actress. At the age of fourteen, the young teen appeared on the small screen for the first time in a television commercial for Clearasil; he would continue to star in commercials over the next few years. During his senior year in high school, Stevenson made his motion picture debut in the film, A Separate Peace (1972), where he co-starred alongside William Roerick and John Heyl. Following his high school graduation, the A’s student went to Princeton University, all while continuing to pursue an acting career on the side. In 1974, the aspiring actor took a year off college to portray the male lead in the drama film, Our Time. That same year, he also appeared in an episode of the TV series, Gunsmoke (1974).

Later returning to school, he graduated with a bachelor’s degree in architecture in 1975. Deciding that he wanted to make a living doing what made him happyーactingーhe continued to work his way up the industry ladder of the show biz. In 1976, Stevenston landed a supporting role in yet another drama film called Lifeguard (1976) which also starred Stephen Young, Anne Archer and Sam Elliott. Soon afterward, the dashing actor, who was recognized for his good looks, received a huge break with when he was cast as one of the principal characters in the mystery drama, The Hardy Boys/Nancy Drew Mysteries (1977). Eventually nominated for a Primetime Emmy Award, the show proved to be a huge breakthrough for he up-and-coming actor. Propelled into stardom, he soon became a household name. For his portrayal of Frank Hardy, the actor received a TV Land Award nomination for “Favourite Crimestopper Duo”, which he shared with his fellow co-star, Shaun Cassidy.

What has the seasoned actor of four decades been up to these days? At sixty four years old, has he retired for good from acting? Or is he still actively taking on roles in front of the cameras? What happened to Parker Stevenson? Where is he now in 2018? 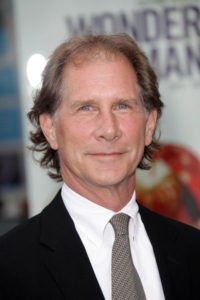 Growing up in an affluent part of New York City, her mother had taken him to her filming sessions with her ever since he was five years old; as a result, Stevenson caught the acting bug early on.  Although he self-described himself to be a “horrendously ugly kid”, Steenson quickly matured into a handsome teen, with dashing hood looks in the late 60’s. At the age of fourteen, he made his small screen debut when he appeared in a commercial for Clearsil skin products; over the next few years, he continued to appear on television from time to time, while attending high school.

As a student, Stevenson went to Brooks School, an elite preparatory institute where he excelled at all of his classes. During his senior year, the aspiring actor filmed his first motion picture, A Separate Peace (1972), which served as a film adaptation of the popular novel of the same name Following his high school graduation, he went to Princeton University where he majored in architecture; despite his studies, he continued to work as an actor on the side on-and-off. Eventually in 1974, Stevenson decided to take a year off of college to star in the drama movie, Our Time. After filming was complete, he returned to school from which he later attained his Bachelor’s degree in 1975. From there, Stevenson decided to focus his attention entirely on acting. Thanks in part to his good looks, he eventually landed a supporting role in the film, Lifeguard (1976). Not long afterward, the actorーwho was twenty five at the timeーwas met with a huge break when he was cast as a series regular in the mystery drama, The Hardy Boys/Nancy Drew Mysteries (1977). 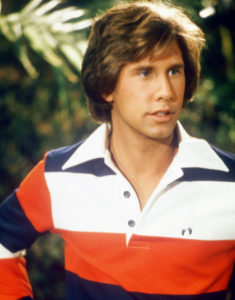 Playing opposite of Shaun Cassidy who portrayed the role of Joe, Stevenson played the other title character, Frank Hardy. Other starring actors in the show included Ed Gilbert, Edith Atwater, Lisa Eilbacher, and Gary Springer. Stevenson’s breakthrough role, the series was largely responsible for the launching of his professional career. Being one of the lead characters, Stevenson appeared in all forty-six episodes.

Filmed in University Studios, The Hardy Boys/Nancy Drew Mysteries premiered on the ABC Network on January 30, 1977. Noted for its anthological style, it received favourable reviews from critics who lauded the show for its great casting. A few months after its debut, the drama’s stellar cinematography garnered a Primetime Emmy Award nomination. In total, it ran for two years, spanning across three seasons. The Hardy Boys/Nancy Drew Mysteries currently holds an above average rating of 7.6/10 on IMDb.

Over a decade later, the actor was cast as the main protagonist in the sci-fi mystery series, Probe (1988). Created by William Link and Isaac Asimov, the show revolved around an eccentric genius-level scientist named Austin James who investigates mysteries with the help of his secretary, Michelle Castle. The two characters were played by Stevenson and Ashley Crow respectively; other cast members later introduced include Jon Cypher and Clive Revill.

Consisting of eight 45-minute long episodes, Probe premiered on the small screen on March 7, 1988. Warmly received, many lauded it for its suspenseful writing and powerful script. Despite the positive raves that it garnered however, it ultimately proved to be short lived as it was cancelled after a two-month run on April 14, 1988ーpartly due to the Writer’s Strike of 1988. 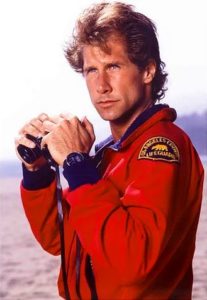 Soon afterward, Stevenson found himself playing a series regular in the action drama, Baywatch (1989). Created by Douglas Schwartz, Michael Berk, and Gregory J. Bonann, it centred around the lives of a team of attractive lifeguards working in the recreational beaches of California.

Throughout the show, they find themselves facing a number of dangers from serial killers to shark attacks. First introduced in the pilot episode, the actor played the role of Craig Pomerayーone of the lifeguards who also worked part-time as a lawyer. After playing as a male lead in the first season, he appears on-and-off as a recurring character in the subsequent seasons. The cast of Baywatch also included David Hasselhoff, Wendie Malick, Shawn Weatherly, Billy Warlock, and Erika Eleniak.

Originally premiered on NBC on September 22, 1989, Baywatch quickly became one of the most watched TV shows in the world, after an initial lukewarm period. Reception wise, the series garnered mostly positive reviews; for instance, it has a score of 6.5/10 on IMDb. With its success, it eventually spawned a spin-off called Baywatch Nights and three direct-to-video films. Altogether, the show was on TV for 242 episodesーtwenty eight of which featured Stevenson’s character; he made his last appearance in the fourteenth episode of the ninth season, Boys Will Be Boys.

Over the next years, Stevenson mostly appeared in made-for-television films such as Are You Lonesome Tonight (1992), Shadow of a Stranger (1992) and Official Denial (1993). In between, he also guest-starred in a couple of episodes of Flesh ‘n’ Blood (1991), and Blossom (1992). In 1998, the actor was cast as the main lead in the TV movie, Legion. Set in the year 2036, it followed a group of special forces, consisting of death-row prisoners, led by Major Agatha Doyle as they embark on a mission to infiltrate enemy territory. While Terry Farrell portrayed the role of Agatha Doyle, Stevenson took on the role of Captain Aldrichーa former war hero and member of the team, who is offered a chance at pardon if he takes part in the mission. The two actors were joined by Corey Feldman, Troy Donahue, Rick Springfield, and Audie England, among others.

Produced by Avi Nesher, Legion premiered on April 18, 1998. In spite of its promising cast however, the film was generally met with negative reviews upon its release. While some praised it to be a descent sci-fi flick, most viewers agreed that its underwhelming characters and plot left something to be desired. Regardless, it is one of Stevenson’s more well-known portrayals of the late 90’s.

Continuing to put himself in front of audience members on television, Stevenson later appeared in the TV movies, Trapped (2001), and Terror Peak (2003). In addition to that, he also guest starred in a few popular series including Judging Amy (2002) and The District (2002) during that period. Following that, the actor took a prolonged break form the small screen prior to returning in an episode of the ABC series, Legend of the Seeker in 2010. From there, it wasn’t until 2014, that he guest starred in Longmire. Some of his recent works on TV include Win, Lose, or Love (2015), His Secret Family (2015), and A Christmas Reunion). In film, he has also made a few appearances in McTaggart’s Fortune (2014), Perfect Disguise (2015), and The War Riders (2016). 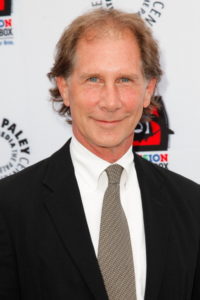 This upcoming fall, the 64-year-old actor will be appearing in a romance drama film called, Mistrust (2017). Although the premise of the plot has not yet been revealed, we do know that its cast will include William Shockley, Nia Peeples, Jane Seymour and Ian Ogilvy. Currently in post-production, it is scheduled to be released on September 19, 2017 in the United States.

On television, Stevenson will also be playing one of the lead characters in the drama, Greenhouse Academy (2017). According to a preliminary synopsis, it will revolve around a group of students at an elite boarding school in Southern California. Aside from the actor, it will also be starring Jessica Amlee, Grace Van Dien, Nadine Ellis and Efrat Dor.

If you’d like to stay up to date with the projects of the 64-year-old actor of The Hardy Boys/Nancy Drew Mysteries fame, you can do so by visiting his official IMDb page. Unfortunately for us fans, it doesn’t look like Stevenson is a user of social media (at least not yet).