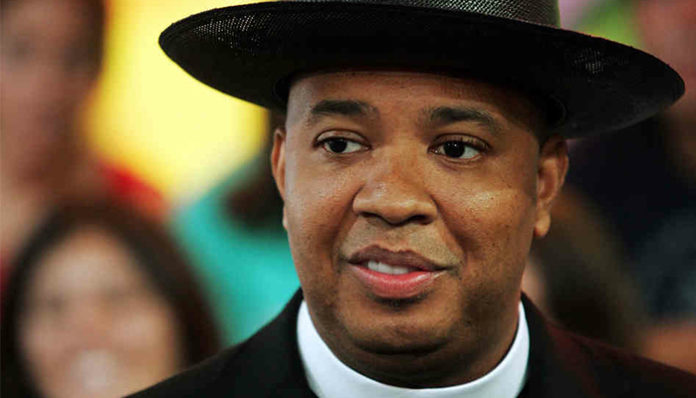 Joseph Simmonsーbetter known as Rev Run, is best known for being one of the co-founders of the hip hop group, Run-D.M.C. Raised in Queens, New York, he first delved into music as a teen when he served as the DJ for Kurtis Blow, one of the early pioneers of rap. Noticed almost immediately for his quick ability to cut turntables, he soon earned himself the nickname of DJ Run. As his confidence on the stage grew, he started to engage Blow in verbal duels; he later played back the recording for his close friend, Darryl McDaniels at school. Struck with inspiration, the two later decided to forge their own rap duo. Reaching out for help from another buddy, Jason Mizell, the duo soon became a trio and thus, Run-D.M.C. was born. With the help of Rev Run’s older brother Russell, the group were eventually successful at landing a recording contract with Profile Records. Getting to work at the studio, they later released their debut single entitled, It’s Like That/Sucker MCS in the winter of 1983.

The following year, Run-D.M.C. dropped their first full length eponymous album, Run-D.M.C. under the same label. A charting success, it landed in the upper half of the Billboard Top 200 and has since gone Gold in the United States. The next January, the trio came out with their second studio album entitled, King of Rock, which proved to be an even bigger hit than their initial release, having sold over one million copies domestically. Since then, Rev Run and his buddies have released a total of seven studio albums, six compilation albums and thirty singlesーmost of which have peaked on the US Charts. Some of their most popular hits to this day include Walk This Way, You Be Illin, It’s Tricky, Christmas in Hollis, Down with the King (Feat. Pete Rock & CL Smooth), and Ooh Whatcha Gonna Do.

After several years of recording together, the group disbanded in 2002. Three years later, Rev Run signed with Def Jam Records and released his first and only solo studio album entitled, Distortion in the fall of 2005. Around that time, the artist also found newfound fame as a reality star in the MTV series, Run’s Houseーa show that centred around his every day life. Surprisingly popular among viewers, it ultimately ran for four years prior to coming to an end in 2009. Aside from Distortion, he’s also starred in several other reality series such as Rev Run’s Renovation (2014), Rev Runs Around the World (2015), The Kitchen (2016), Rev Run’s Sunday Suppers (2014), and Guy’s Big Bite (2016).

So what has the Run-D.M.C. co-founder been up to these days? What new projects have he gotten himself involved with? What happened to Joseph SimmonsーAKA Rev Run? Where is he now in 2018? 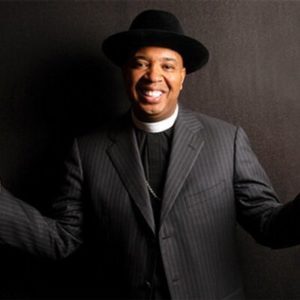 Born on November 14, 1964 in Queens, New York, Rev Run (Birth Name: Joseph Ward Simmons) is the youngest out of three siblings; he has two older brothersーRussell, the founder of Def Jam Records, and Danny who works as a painter. Growing up in the neighbourhood of Hollis with his siblings, he first got involved in music as a teen in the 70’s.

As it happened, Rev Run eventually found himself acting as a DJ for Kurtis Blowーan early pioneer of rap who was managed by his brother at the time. Before long, he was performing alongside the rapper on-stage. Noted for his quick skills at the turntable, the New Yorker soon earned himself the moniker of DJ Run. As his confidence grew with time, he later started to engage in duels with Blow behind the mic.

Having recorded the performances, he then played it back for his close friend, Darryl McDaniels. Although McDaniels was initially more interested in sports the music, he was eventually convinced after buying a set of turntables. Inspired by the work of Rev Run’s brother, the two friends later decided to forge a rap duo, however not before recruiting the help of another buddy, Jason Mizellーwho would become their third member. Following their high school graduation in 1982, they turned to Russell for help with their recording. Although he successfully landed the group a recording deal, there was one conditionーMcDaniels had to change his stage name to “DMC”; the group would then subsequently be called “Run-D.M.C.” While they were initially hesitant about using such a name, they eventually came to terms with itーthus, Run-D.M.C. was born.

After forging a recording deal with Profile Records, a label oriented toward hip hop music, they trio came out with their debut single entitled, It’s Like That/Sucker MCs in the winter of 1983. A successful hit, it went on to peak at number fifteen on the Top R&B Chart. Following the release of the single, they once again returned to the studio to begin working on their debut album. 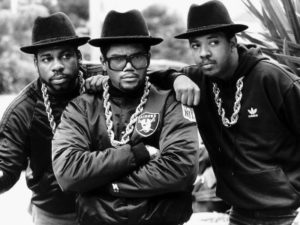 Entitled Run-D.M.C., their first album reached the stores on March 27, 1984. Produced in part by Rev Run with help from Larry Smith, its contents were considered groundbreaking at the time in the world of hip hop. In contrast to the light sounds that were prominent in the genre at the time, Run-D.M.C. boasted both aggressive rhymes and sparse beats, making them stand out amongst their competition. Recorded in New York City the previous year, the two-sided disc consisted of nine tracks including Jay’s Game, Wake Up, 30 Days, Jam-Master Jay, and Hollis Crew (Krush-Groove 2). In a later deluxe edition that was re-issued in 2005, the album contained four extra tracks, Russell & Larry Running at the mouth, Sucker M.C.’s, Here We Go, and Rock Boy (B-Boy Mix).

A strong debut for the trio, the album entered the Billboard Top 200 at number fifty three and the Top R&B and Hip Hop Albums Chart at number fourteen. Warmly received by contemporary critics, Run-D.M.C. garnered numerous compliments for its unique delivery of hip hop; for instance, the Chicago Tribune, The Village Voice, The Rolling Stone, all gave the album near perfect scores. Considered to be one of the best albums of its genre of all times, it has since been listed in the Rolling Stone’s list of “Top 100 Greatest Albums of the 1980s”. In 1998, over a decade after its original release, it was also featured in The Source’s list of “Top 100 Best Rap Albums”. The trio’s first RIAA-certified album, it later went Gold in December of 1984.

The following year, Rev Run and his friends came out with their second studio album, King of Rock, also under the Profile label, on February 5, 1985. Another production effort by Rev Run and Larry Smith, it is noted for featuring more rock-oriented sounds, with a number of tracks boasting prominent guitar riffs. Under an hour in length, the album came complete with nine tracks including Darryl and Joe (Krush-Groove 3), You’re Blind, Jam-Master Jammin, Rock the House, and It’s Not Funny, many of which were co-written by the rapper himself. Similar to their earlier work, a deluxe edition boasting several bonus tracks was later also made available in stores.

Even more successful than their debut effort, King of Rock peaked at number fifty two on the Billboard 200, where it spent fifty six weeks. On the US Top R&B and Hip Hop Albums Chart, it also found its way to number twelveーwhich is a slight improvement compared to what was achieved by its predecessor. Met with favourable reviews, the album received stellar ratings from several mainstream publications such as Rolling Stone, the Village Voice and the Encyclopedia of Popular Music. Since then, King of Rock has sold over a million copies across the United States, earning it Platinum accreditation from the RIAA. 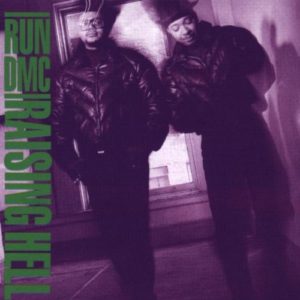 From there, their popularity as a hip hop group only went upーthe next year, Run-D.M.C. released their third full length album entitled, Raising Hell on May 15, 1986. Regarded by many to be a groundbreaking album, it featured a twelve-song track list which included the numbers Proud to be Black, Son of Byford, Dumb Girl, Hit It Run, Is It Live, and Peter Piper. Much like their preceding works, its production was also handled in part by Rev Run himself.

Their most successful album to date, Raising Hell peaked at number six on the Billboard Top 200 and at number one on the Top R&B and Hip Hop Albums Chartーmaking it the first hip hop album to achieve such a feat. Outside of the United States, the album also found success in the UK, Canada and New Zealand, where it peaked at number forty one, thirty two and eight respectively. Critically acclaimed, it garnered dozens of glowing reviews from high-profile publications such as Q Magazine, Rolling Stone, The Village Voice, Spin Alternative, and Allmusic. In an annual poll, Raising Hell was also hailed as the fifth best album of its year in the genre of Pazz & Jop. Since then, it has gone Platinum three times in the US, having sold over three million copies in the country.

After a two year break, Rev Run and the gang released their fourth studio album, Tougher Than Leather on May 17, 1988. Although it didn’t achieve the same level of popularity as its predecessor, it was still a relatively big hit. Comparable to their earlier works in terms of length, the standard edition came with twelve tracks including Soul to Rock and Roll, How’d Ya Do It Dee, Tougher Than Leather, Papa Crazy, Radio Station, and Beats To The Rhyme. A handful of new tracks were later included in the deluxe edition including Penthouse Ad, Christmas in Hollis, Crack, and Beats To The Rhyme.

Upon its release, Tougher Than Leather peaked at number nine on the Billboard 200 and at number two on the US Top Rap Albums Chart. Overseas, it also charted in New Zealand, Australia, Canada and the UK. Supported by three singles, all of which charted in the United States, the album received mostly positive reviews, although some sources such as Pitchfork Media gave it less stellar reviews.

From the looks of it, it would appear that the 52-year-old hip hop legend has been focusing more of his time on television in the recent years. Glimpsing back at his discography, his latest music release was that of his solo album, Distortion back in 2005. On the small screen however, he’s been appearing in a number of reality shows; for instance just last year, he starred in Rev Run’s Sunday Suppers (2016), Food Network Star (2016), Food’s Greatest Hits (2016), Guy’s Big Bite (2016), and Rev Runs Around the World (2016), to name a few.

Nothing much has been posted about his upcoming works for 2018ーonly time can tell at this point.

If you’d like to stay up to date and connected with the founding member of Run-D.M.C., you can do so by following him on social mediaーyou can find Rev Run on Twitter at @RevRunWisdom or on Instagram at @Revwon.