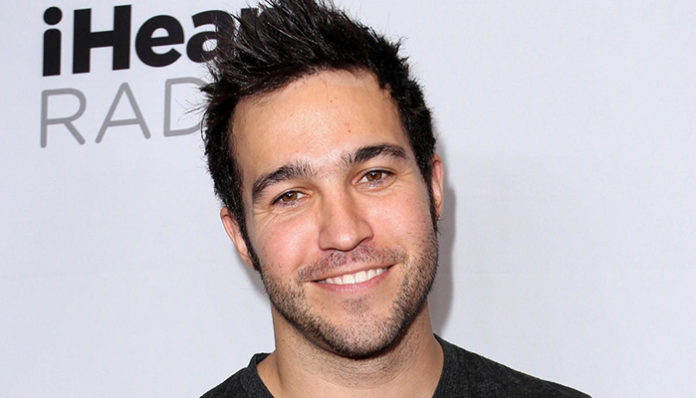 Illinois-born rock musician Pete Wentz is best known for being a member of the band, Fall Out Boy. Growing up playing sports, the avid athlete was extremely fond of soccerーat one point, he even considered pursuing a careerf as a professional soccer player. However, his love for musicーsomething which he was raised aroundーultimately won in the end. Having been involved in the hardcore punk scene ever since his teens, he was part of several bands during the 90’s including First Born, Arma Angelus, Extinction, Birthright, Racetraitor and Yellow Road Priest. In 2001, Wentz founded a pop punk group called Fall Out Boy with Joe Trohman, a fellow bassist. After many performances together, they were successful in obtaining a recording contract with Fueled by Ramen, a Florida-based label, in 2003. Not long afterward, Wentz together with the rest of the rock band released their debut studio album, Take This to Your Grave (2003). Although it didn’t chart as ideally as they’d hoped, it went on to become their first RIAA-certified album.

Two years after this initial effort, they released their second full-length album entitled, From Under the Cork Tree (2005). Their most successful album to date, it has since sold over 2.7 million copies in the United States alone. Since then, Fall Out Boy has released a total of six studio albums, two live albums, thirty three music videos, five extended plays and over twenty singlesーmost of which have charted nicely in the United States. As of 2013, the punk rock band have sold well over 7,500,000 millions albums across the globe.

In addition to his career as a musician, Pete Wentz has also embarked on several other projects including acting and writing. In 2007, he made his television debut in the mini-series, Winter Tales where he lent his voice to the show’s narrator. Throughout the years, he has also made guest appearances in CSI: NY (2009), Moustachette (2009), Team Unicorn (2011), Friends with Benefits (2011), Robot Chicken (2011), and School of Rock (2016). Noteworthy is the fact that he is also one of the hosts of the reality competition series, Best Ink (2012). As an author, he wrote a book called The Boy with the Thorn in His Side, which revolved around the nightmares that he used to have as a young boy; it was released in 2005. Close to a decade later, Wentz released his second book, Rainy Day Kids in 2013.

So what has the talented and well-rounded musician been up to recently? What new projects have been keeping him busy these past few months? What happened to Pete Wentz? Where is he now in 2018? 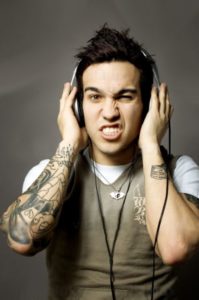 Born on June 5, 1979 in Wilmette, Illinois, Pete Wentz (Birth Name: Peter Kingston Wentz III) is the son of Pete Wentz II and Dale Lewis, an attorney and a high school counsellor; he is of German, Afro-Jamaican and English descent. Growing up in Cook County with his younger brother and sister, he was an avid athlete and played many sports during his youth; he was especially fond of soccer. As a teen, he went to New Trier High School briefly prior to transferring to North Shore Country Day School, where he played as a member of the school soccer team. At one point in his life, Wentz even considered pursuing the sport as a professional career; however his love for interestーsomething which he’d always held a passion forーultimately won over.

Having said that, that’s not to say that Wentz didn’t run into trouble during his adolescent years. When he was fourteen, he started to skip class regularly to smoke pot with a few friends; fortunately, he soon quite after it began negatively impacting his grades. Following his high school graduation, he landed a job at a Chicago Subway restaurant while attending DePaul University as a political science major. Just a few months before obtaining his bachelor’s degree however, he dropped out to focus his attention on his career at the fast-food chain.

On top of that, he had always been involved in Chicago’s punk music scene. Throughout the late 90’s, he was a member of several bands including First Born, Arma Angelus, Extinction, Yellow Road Priest, Racetraitor, and Birthright. In 2001, Wentz and Joe Trohman, a fellow bassist whom he’d played with during his days with Arma Angelus, formed a pop punk group called Fall Out Boy. The bandーwhich consisted of four membersーgave their first public performance at DePaul University shortly afterward. It wasn’t until 2003 that they secured a recording deal with Fueled by Ramen, a label owned by the Warner Music Group. 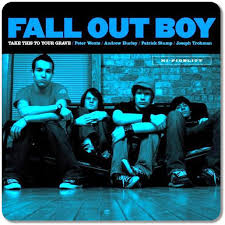 On May 6, 2003, Wentz and his band released their debut studio album entitled, Take This to Your Grave. Recruiting the help of Sean O’Keefe for its production, the album’s cover art saw all five of the group’s members sitting on a broken sofa. Mostly recorded at Madison’s Smart Studios in Wisconsin, it contained eleven tracksーa couple of which featured Justin Pierre and Jeff Warren of Knockout. Some of the titles from the disc that were co-written by Wentz include: Dead on Arrival, Tell That Mick He Just Made My List of Things to do Today, Homesick at Space Camp, Calm Before the Storm, and The Patron Saint of Liars and Fakes.

Following its release, the album gradually garnered the band more and more fans. Upon its debut, it entered the Billboard Heatseekers Albums Chart at number 31; it eventually managed to peak at number eleven close to a year later. Well received by critics, it garnered numerous praises for its excellent up-tempo tunes and has been hailed as a “pop punk masterpiece” by the Alternative Press. Johnny Loftus writing for AllMusic also gave Take This to Your Grave a near perfect four and a half star rating. Since it was first released, the album has been included in many top song lists. Considering this, it’s not surprising to know that it eventually became the Fall Out Boy’s first Gold-certified album.

From there, they released their second studio album, From Under the Cork Tree on May 3, 2005. Distributed via Island Records, all of lyrics featured in the tracks were written by none other than Wentz himself. Considered to be the band’s major breakthrough success, it contained thirteen songs on the standard edition, a few of which included Nobody Puts Baby in the Corner, 7 Minutes in Heaven (Atavan Halen), Champagne for My Real Friends, Real Pain for my Sham Friends. Also available in stores was a limited “Black Clouds and Underdogs” edition, which boasted five bonus tracksーDance Dance, Sugar, We’re Going Down, My Heart is the Worst Kind of Weapon, The Music or the Misery, and Snitches and Talkers get Stitches and Walkers.

On the day of its release, the album opened at number nine on the Billboard 200, selling close to 68,000 copies within the first week. The Fall Out Boy’s first top 10 debut, it later went on to peak at the top of the Billboard Rock Albums Chart in the United States. Outside of the country, it also saw success in New Zealand, Ireland, Canada, Australia, France, and Scotland. Universally acclaimed, From Under the Cork Tree received glowing reviews from multiple publications including The Alternative Press, Allmusic and Entertainment Weekly. In 2016, the album was listed as “One of the 40 Greatest Emo Albums of All Time” by the Rolling Stone; it has since also been named as a modern classic by Rock Sound in the UK. As of January 2006, it has been certified 2x Platinumーmaking it the band’s first, and only multi-platinum album. 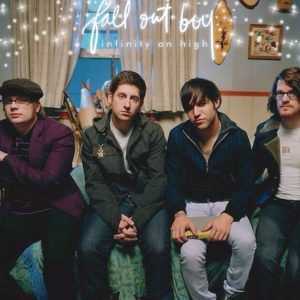 Following their breakthrough success, the band released their third studio album, Infinity on High on February 6, 2007. Recorded at Pass Studios in Los Angeles, all of its lyrics were panned by Wentz. In addition to being a collaboration with several new music producers, it also featured American rapper, Jay-Z in the song, Thriller. Utilizing the sounds of pianos, violins and horns, it boasted fourteen tracks including Hum hallelujah, Don’t You Know Who I Think I Am, Bang the Doldrums, You’re Crashing, But You’re No Wave, and Golden.

Another major success for the Fall Out Boys, Infinity on High debuted at the top of the Billboard 200 and sold over 260,000 copies domestically. The group’s first number one album, it later went on to peak at number one on the US Digital Albums, Tastemaker Albums and Rock Albums Charts. Overseas, it also charted in Australia, Canada, Ireland, Scotland, New Zealand, the UK, the list goes on. Similar to their preceding effort, it garnered multiple positive reviews, many of which complimented the band for their sharp lyrics and exciting style. To date, over 1.4 million copies have been sold in the USーa feat which has earned it Platinum accreditation from the RIAA.

The following year, Wentz and his band released their next album, Folie a Deux. “A Madness Shared By Two” in English, it was once again met with hugely positive reviews upon its release. Having said that, the collection of thirteen-songs didn’t quite rival the commercial success of their previous albums, having only sold approximately 449,000 copies domestically.

Eventually in the spring of 2013, they released their fifth studio album, Save Rock and Rollーwhich put them back at the top of the game. A chart topper, it peaked at number one on the US Billboard 200 and the Canadian RPM Chart. Showered with praises, it has since sold more than 789,000 copies in the USーmaking it the band’s first Platinum-certified album. Supported by four singles, it was also promoted by a tour, which took the group around Europe and Asia in the fall of 2013.

The band’s latest release is that of American Beauty/American Psycho, which was made available on January 2015. 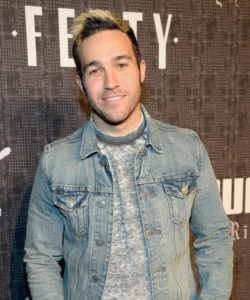 In terms of music, the bass player hasn’t put forth any new material as of late. Having said that, he has appeared as himself in several TV shows and specials; for instance, he served as a celebrity panelist on an episode of the reality game show, Match Game (2016). This past year, he also co-hosted a section of The Talk, and presented at both the 2016 Billboard Music Awards and the 2016 Billboard Music Awards.

As far as acting goes, he also played a small recurring character in the musical comedy, School of Rock last March. That seems to be it howeverーit doesn’t look like he has any major shows planned for 2018, as of yet anyway.

If you’d like to stay up-to-date and connected with the 37-year-old bassist, you can do so by following Pete Wentz on social mediaーyou can find him on Twitter or Instagram at @petewentz.