What Happened to Macy Gray – The Singer Now in 2018 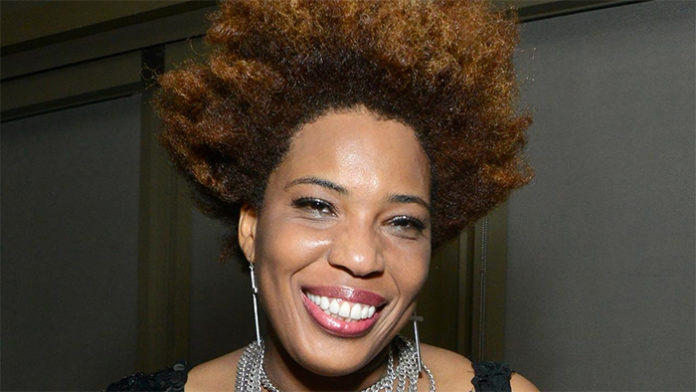 Grammy Award-winning singer Macy Gray first gained recognition with the release of her debut album, On How Life Is (1999). The daughter of a schoolteacher, she began playing the piano at the age of seven. Known for her unique, raspy vocals, she joined a number of bands during her youth, writing songs both as a hobby and for fun.  While she was in university, an opportunity opened up that allowed her to record a demo tape; from there, she eventually went on to perform at a number of jazz cafes in Los Angeles. Although Gray considered her distinctive voice to be undesirable, it soon proved to be the opposite. Adopting the stage name of Macy Gray, she was later offered a recording contract with Atlantic Records in the late 90’s. Despite this, she was subsequently dropped from the label after Tom Carolan, the A&R who had been responsible for her signing, left the company. Initially discouraged, Grey later managed to land a recording deal with Epic Records after receiving encouragement from Jeff Blue, the A&R of Zomba Publishing.

With the Epic label, Gray broke into the music scene with her debut album, On How Life Is in the summer of 1999. A massive success, it later went Platinum three times in the United States, rocketing the singer to a newly found celebrity status. A couple of years afterward, she followed up with a second full-length album entitled, The Id. Since then, she has come out with a total of nine studio albums, one live album, twenty one music videos, and twenty seven singlesーone of her most popular hits to this day is probably that of the platinum track, I Try. Nominated for a Grammy Award in 2000 for “Best New Artist”, the song later earned her a Grammy win for “Best Female Pop Vocal Performance” in 2001.

Aside from having carved a name for herself in the music industry, Gray has also amassed a number of credits to her name as an actress. In 2000, she made her acting debut in an episode of the legal comedy, Ally McBeal. Throughout the next few years, the artist guest starred in a handful of series including Spider-Man (2002), When I Was a Girl (2003), American Dreams (2004), That’s So Raven (2004), and Duck Dodgers (2005), to name a few. In 2001, Gray also made her feature film debut in the Oscar-winning crime thriller, Training Day. Some of the other motion pictures which she’s been involved with include Gang of Roses (2003), The Crow: Wicked Prayer (2005), Domino (2005), and For Colored Girls (2010), among others.

So what has the multi-talented woman from Ohio been up to recently? What new projects have been keeping her busy as of late? Has she released any new music albums? What happened to Macy Gray? Where is she now in 2018? 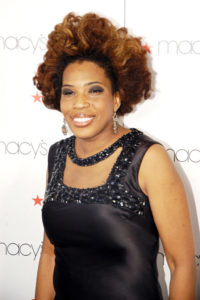 Born on September 6, 1967 in Canton, Ohio, Macy Gray (Birth Name: Natalie Renee McIntyre) is the daughter of Otis Jones, and Laura McIntyre. When she was still a baby, her father left the family; she was consequently raised by her mother, a schoolteacher and her stepfather, a steelworker.

At the age of seven, Gray picked up the pianoーan instrument which she quickly mastered. As a teen, she went to the same high school as Marilyn Manson, although the two did not know each other at the time. After graduating from a local public school, she went to the University of California where she majored in scriptwriting; it was during that period in college that she began singing.

While attending classes the the university, a friend had asked her to write a few songs. Although a subsequent demo session was scheduled, the singer never ended up showing up. As a result, Gray recorded her tracks herself. Around that time, she also joined a number of small bangs, playing and writing music both as a hobby and for fun. At one point, she was even given a bunch of jazz CDs to listen to by a friend, who’d asked her to join his band. From there, she eventually became acquainted with a music producer by the name of Joe Solo while working at a local Beverly Hills store. Working together, the pair wrote and recorded a number of songs at his studio; the subsequent demo tape later earned Gray the opportunity to perform at various local jazz cafes in Los Angeles.

Although Gray herself had deemed her characteristic, raspy voice to be undesirable, she was soon signed by Atlantic Records. Having said that, she was eventually dropped from the label prior to even having released a record, after Tom Carolanーthe A&R executive who signed her, departed from the company. Although she felt dejected initially, she was later successful in attaining a recording deal with Epic Records in 1998 after having received encouragement from an LA-based A&R, Jeff Blue. With that, she began working on her debut album. 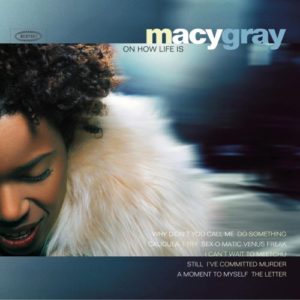 On July 1, 1999, Gray released her debut studio album entitled, On How Life Is under the Epic label. Recorded at a couple of different studios in Hollywood, California, it consisted mainly of R&B and soul music. Produced by Andrew Slater, it came complete with ten tracksーall of which were entirely written by the songwriter herself; some titles from the disc included A Moment to Myself, I’ve Committed Murder, I Can’t Wait to Meetchu, Why Didn’t You Call Me, and Sex-o-matic Venus Freak. A bonus track entitled, Rather Hazy was also included in the Japanese and Australian versions of the album.

Critically acclaimed, On How Life Is peaked at number four on the Billboard 200 and later settled in at number nine on the Top R&B and Hip Hop Albums Chart. Well received by critics, the five star-rated album garnered many praises for its stellar vocals and brilliant songwriting; mainstream publications such as The Rolling Stone, Q Magazine also gave the album favourable reviews. Internationally, On How Life Is was met with similar reactions; it charted in several overseas countries such as Scotland, Finland, Germany, Australia, Canada, Finland and Japan. Also noteworthy is the fact that it reached number one in the UK, New Zealand, Denmark, and Australia. The albumーwhich later spawned four singlesーremains to be Gray’s best-selling to date, having sold over three million copies in the United States and over seven million copies around the world. Later certified 3x Platinum, it also garnered Gray a Grammy Award for the category of “Best Female Pop Vocal Performance” in 2001, two years after its original release.

Two years later, she came out with her second studio album, The Id. Produced in part by Gray herself with the help of Ahmir Thompson, Raphael Saadiq, Kilu Grand, and Darryl Swann, it boasted fourteen tracksーall of which fell into the category of R&B and soul music. A few minutes short of an hour in length, it featured several guest artists including Erykah Badu, Slick Rick, Angie Stone, Sunshine Anderson and Mos Def. A few of the more memorable hits from the album include Sexual Revolution, Sweet Baby, Gimme All Your Lovin’ Or I Will Kill You, Blowin’ Up Your Speakers, and Freak Like Me.

Although not as big of a commercial success compared to her debut effort, it entered the Billboard 200 at number eleven in the United States, selling over 93,000 copies in the first week. On the Top R&B and Hip Hop Albums Chart, it also managed to reach number nine, not too long after being released in stores. Despite the fact that it was less of a smash hit in the US, it outranked Gray’s previous album in several European countries such as Denmark and the UK. Given mostly favourable reviews from critics, The Id has sold approximately 593,000 copies as of 2004ーmaking it her second RIAA certified album. The album eventually spawned two singles, Sexual Revolution and Sweet Baby, the last of which featured artist, Erykah Badu. 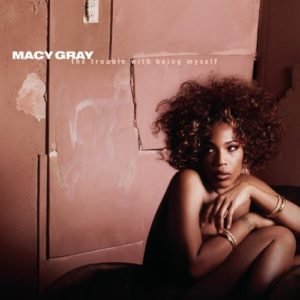 On April 28, 2003, the R&B artist released her third full-length album, The Trouble with Being Myself. Her last album with Epic Records, its production was handled by Dallas Austin, Dave Way, Darryl Swann, DJ Kilu Grand, although Gray also helped to produce a few of the tracks herself. Recorded in between Hollywood and Burbank, California, it contained twelve soul songs including My Fondest Childhood Memories, She Don’t Write Songs About You, Things That Made Me Change, She Ain’t Right For You, and It Ain’t the Money (Feat. Pharoahe Monch)ーmost of which were co-written by Gray.

Upon its release, The Trouble with Being Myself entered the US Billboard 200 at number forty four. Although not particularly successful compared to her preceding albums, it still managed to peak at number twenty nine on the Top R&B and Hip Hop Albums Chart. Outside of the United States, it also charted in several other countries such as Japan, Denmark, France, Italy, Switzerland, and Australia, to name a few. Despite its lukewarm success, the majority of the reviews that it garnered were positive. As of 2007, four years after its original release, it has sold approximately 134,000 copies in the United States.

Following that, Gray took a four year break before returning in 2007 with her fourth album, Big. Her first and only release with the will.i.am Music Group, it contained a number of songs including Glad You’re Here, One For Me, Strange Behaviour, Treat Me Like Your Money, What I Gotta Doーthe last of which was later used in the soundtrack for the animated film, Shrek the Third (2007). A moderate hit, it debuted at number thirty-nine on the Billboard 200 and sold close to 23,000 units within the initial week of release. Given two and a half stars from the Rolling Stone Magazine, it went on to produce three singlesーWhat I Gotta Do, Shoo Be Doo, and Finally Made Me Happy. 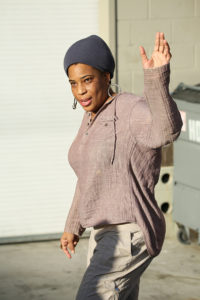 Grace hasn’t come out with any new music material since the release of her last album, which was released back in September of 2016ーhaving said that, it looks like she’ll be making a special performance at Colston Hall, Bristol this upcoming March according to a recent announcement made this January. If you’d like to see the singer up on stage performing some of the songs from her latest album, you won’t want to miss this event! Tickets are available for purchase via Colston Hall’s official website.

Other than that, not too much is known about what the singer has up her sleeve for this year. We’ll keep you updated, so stay tuned!

If you’d like to stay connected with the 49-year-old R&B vocalist herself, you can do so by following her on social mediaーyou can find her on Facebook at @macygrayslife. Alternatively, you can visit her official Youtube Channel at @thegraylife!