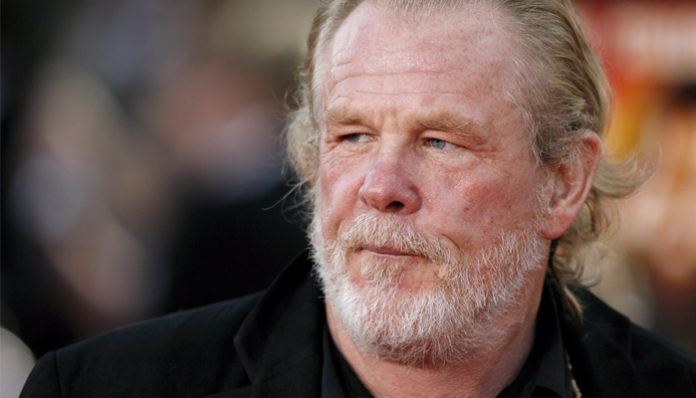 American Actor Nick Nolte first gained mainstream success for his role in the television mini-series, Rich Man Poor Man (1976). As a teen, he often ran into trouble due to fighting and drinking alcohol in school. Having said that, he was a talented athlete, and eventually was able to go to Arizona State University on a football scholarship; unfortunately, he was later expelled due to poor grades. From there, Nolte began to turn his attention toward theater. Deciding to try his hand out at acting, he relocated to Los Angeles in the early 70’s, where he started to study at Stella Adler’s Academy and at the Pasadena Playhouse. Starting off his career with a number of uncredited roles, he appeared in Death Valley Days (1969), Dirty Little Billy (1972), Electra Glide in Blue (1973), Griff (1973), and Cannon (1973), prior to receiving his first major part in the television mini series, Rich Man Poor Man in 1976. From there, Nolte graced the screens in a number of films including The Deep (1977), Who’ll Stop the Rain (1978), Heart Beat (1980), and Cannery Row (1982).

In 1982, the actor received a huge break after starring in the action comedy film, 48 Hrs. opposite of Eddie Murphy. Met with critical acclaim, it further solidified Nolte’s place in Hollywood. Continuing to play various character over the next few years, he went on to appear in a series of films including Under Fire (1983), Grace Quigley (1984), Down and Out in Beverly Hills (1986), and Three Fugitives (1989). His next breakthrough came in 1991, after he was cast as the lead protagonist in the romantic drama film, The Prince of Tides. Lauded for his performance, it netted him several awards including a Golden Globe for Best Actor in a Motion Picture Drama. Some of the later movies that he’s taken part in include Affliction (1997), The Golden Bowl (2000), The Beautiful Country (2004), Peaceful Warrior (2006), The Mysteries of Pittsburgh (2008), and Warrior (2011), to name a few.

A star with close to a hundred acting credits to his name, he has accumulated a sizable amount of industry awards throughout his multi-decade long career. So far, he has received give Golden Globe Award nominations (among which was a win), a Primetime Emmy Award nomination, three Academy Award nominations, two Satellite Award nominations, and countless others. Although he’s focused the majority of his career on film, he has guest appeared in several television series over the years such as Medical Center (1973), The Streets of San Francisco (1974), The Rookies (1974), Gunsmoke (1974), Barnaby Jones (1975), Luck (2011), and Gracepoint (2014). Additionally Nolte has been a featured guest in several TV talk shows including Charlie Rose, The Tonight Show with Jay Leno, Up Close with Carrie Keagan, The Oprah Winfrey Show, and Larry King Now.

So what has the seasoned actor been up to since then? Will he be retiring from acting altogether now that he’s in his mid to late 70’s? If not, what projects have he been working on as of late? What happened to Nick Nolte? Where is he now in 2018? 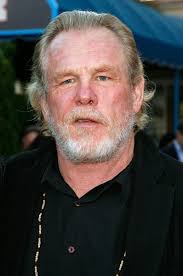 Born on February 8, 1941 in Omaha, Nebraska, Nick Nolte (Birth Name: Nicholas King Nolte) is the son of Franklin Arthur Nolte, a farmer and Helen King, a department store employee; he is of German, Scots-Irish, Scottish, English, and Swiss-German descent and has an older sister named Nancy. Growing up, he went to Kingsley Elementary School, after which he attended Westside High School in his hometown of Omaha, where he was a talent football player. As a teen however, he often got himself into trouble with his fighting and alcohol use; at one point, his beer-hiding had led him to be expelled from Benson High.

After graduating from high school in 1959, Nolte moved to Southern California where he attended the Pasadena City College. Shortly afterward, he transferred to Arizona State University under a football scholarship. While he was a skilled member of the college football team, poor grades eventually led to his expel in the early 60’s. It was around this time that Nolte turned his attention toward theater and drama; deciding to try his hand out at acting, he later studied at Stella Adler’s Academy and at the Pasadena Playhouse. In 1969, he made his official acting debut in an episode of the TV series, Death Valley Days. From there, he played various small characters in Disneyland (1969), Dirty Little Billy (1972), Electra Glide in Blue (1973), and Griff (1973), to name a few. 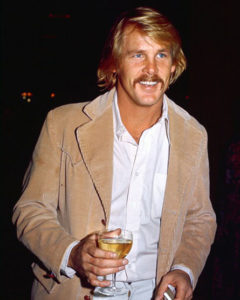 In 1976, the aspiring actor received a big break after being cast as one of the lead characters in the ABC mini-series, Rich Man, Poor Man. Based on a book of the same name written by Irwin Shaw, it centered around two impoverished brothers from the mid 1940’s to the late 1960’s. Starring opposite of Peter Strauss, Nolte portrayed the role of Thomas Jordache- the rebelling young brother who turns to boxing to financially suport himself. As one of the principal protagonists, he ended up appearing in all nine episodes of the show. In addition to Strauss and Nolte, Rich Man, Poor Manalso starred William Smith, Edward Asner, Susan Blakely, Dorothy McGuire, and Gloria Grahame.

Premiered on February 1, 1976, the drama series was incredibly popular among viewers; its success would eventually spawn the sequel, Rich Man, Poor Man Book II in the fall of 1976. Not only did the show garner impressive ratings, but it also earned numerous awards including four Golden Globes (including one for Best Drama Television Series), and four Primetime Emmy Awards. Despite it being his first major role on the small screen, Nolte’s portrayal also yielded him both a Primetime Emmy Award nomination for the category of Outstanding Lead Actor in a Miniseries or a Movie and a Golden Globe Award nomination for Best Actor in a Drama Television Series.

The turning point of his career, Rich Man, Poor Man ultimately led him to a series of larger roles in the subsequent years.

Directed by Walter Hill, the movie centered around an unlikely team consisting of a police officer and a convict who work together in attempts to apprehend a cop-killer. Considered to be one of the first movies of the buddy cop genre, it starred Nolte as Inspector Jack Cates- the officer of the San Francisco Police Department who is paired up with convict, Reggie Hammond (played by Eddie Murphy). The two actors are joined by David Patrick Kelly, James Remar, Sonny Landham, Brion James, and Annette O’Toole.

Released in theaters on December 10, 1982, 48 Hrs. took in more than $4.3 million during its opening weekend. The 7th highest grossing film of its year, it eventually grossed a total of $78.8 million in the United States- a grand amount compared to its $12 million production budget. Met with critical acclaim upon its release, it currently holds positive reviews on numerous film-rating sites including Rotten Tomatoes and Metacritic. A major success, it won a handful of awards including a Golden Globe in 1983. In hindsight, 48 Hrs. was perhaps the greatest project for Nolte in the 80’s. 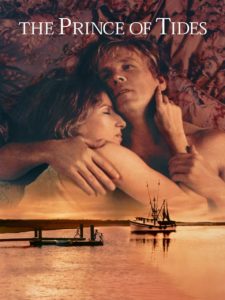 In 1991, Nolte starred in the romantic drama film, The Prince of Tides opposite of actress Barbra Streisand. Adapted from a novel of the same title, it told the story of an individual’s struggle to overcome the effects of a dysfunctional childhood. Playing as the lead protagonist, the actor took on the role of Tom Wingo- a school teacher who travels to New York to help his twin sister, after her latest suicide attempt. The rest of the movie’s cast included Barbra Streisand, Blythe Danner, Melinda Dillon, Kate Nelligan, and Jeroen Krabbe.

Originally screened on December 25, 1991, The Prince of Tides earned over $10 million during its opening weekend, putting it at number four on the North American box office. By the end of its run, it had a final domestic gross of $74.7 million; it later earned an additional $36 million rentals, which gave it a total gross of $110 million. If Nolte’s earlier works didn’t solidify his place in the movie industry, this title did- not only did it earn him much praise, but it also netted him a Golden Globe Award for Best Actor in a Motion Picture Drama. To date, it remains to be one of his most well remembered roles on the big screen.

Six years later, the actor found himself starring in yet another blockbuster, Affliction (1997). Directed and written by Paul Schrader, the drama film depicted the story of a small-town New Hampshire policeman named Wade Whitehouse- of course, he was portrayed by none other than Nolte himself. As he investigates a mysterious hunting incident over the course of the film, various events lead him to mental anguish. Besides Nolte, Affliction also featured the talents of James Coburn, Sissy Spacek, Willem Dafoe, Mary Beth Hurt, and Holmes Osbourne.

After premiering at the Venice Film Festival in August of 1997, Affliction was released nation-wide on December 30, 1998. Met with universal acclaim, the movie garnered glowing reviews from publications such as the Chicago Sun-Times and The New York Times. Despite its stellar ratings, its commercial performance was disappointing; from a budget of $6 million, it only managed to gross $6.3 million at the box office. Nevertheless, the title went on to earn a multitude of awards, including an Academy Award nomination and a Golden Globe Award nomination, both of which went to Nolte.

It was announced last fall that Nolte will be reprising his role as Richard Graves in the upcoming second season of the Epix comedy series, Graves (2016). His first lead part on the small screen since Rich Man, Poor Man back in the 70’s, he plays the part of the main protagonist, a former United States President. Premiered in October of 2016, the first season of Graves ended in December of 2016; the premiere date for the second season has not yet been announced.

In fact, the same show earned Nolte a Golden Globe Award nomination for Best Actor in a Comedy Television Series this past January. Unfortunately, he lost the award to fellow actor, Donald Glover.

Aside from that, it doesn’t look like the Hollywood star has any other roles planned so far for this year. We’ll keep you updated!

Seeing as how Nick Nolte is not on social media (which is not surprising considering he’s in his seventies), the easiest way to keep track of his latest projects is probably to visit his official IMDb page.