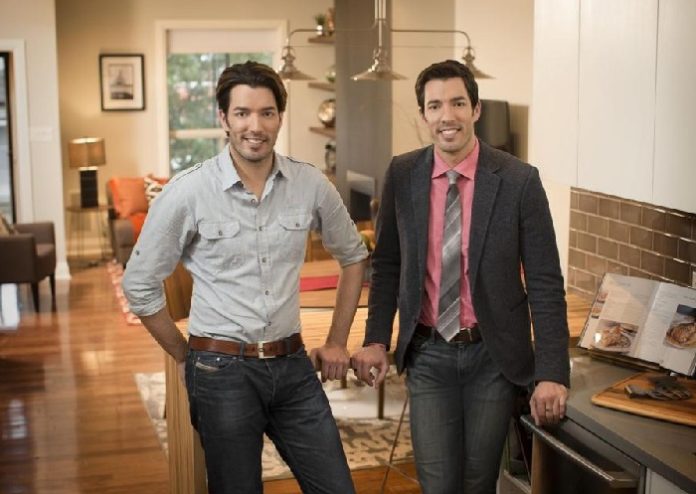 The stars of HGTV’s ‘Property Brothers’, twins Jonathan and Drew Scott have enjoyed a huge rise in popularity that has seen them become the A-list stars of cable television. The good-looking twins have an incredibly wide range of talents that have elevated them to become rich, successful and much admired by legions of adoring fans, in particular the ladies, and the hugely successful Property Brothers show has opened the door for a number of equally popular spin-off shows that feature the great relationship between the two, as well as their expert knowledge of the real estate market and how to profit from it.

The Property Brothers show is now in it’s tenth season and attracts millions of viewers a week from over 140 countries, but the brothers are a lot more than just rich real-estate guru’s with movie star looks and great personalities, the twins also have quite a few talents that you may not know about that have helped them become such firm favorites in the reality TV ratings. But what else are these two giants of cable TV capable of? And exactly how much are Jonathan and Drew worth now in 2018? Read on to learn a few secrets about the Property Brothers.

How Did The Property Brothers Make Their Money & Wealth

Jonathan Silver Scott was born in Vancouver, Canada on April 28th 1978, brother Drew, full name Andrew Alfred Scott was born four minutes later, which came as quite a surprise to parents Joanne and Jim as they had not known Jonathan was accompanied by a twin until that moment.

Father Jim was of Scottish descent and had moved to Canada when still a teenager to follow his dreams of becoming a cowboy. After working in the film industry for several years as a stuntman and actor Jim bought a ranch in Maple Ridge, near Vancouver where the twins spent their early life. On their seventh birthday he encouraged them to look for jobs and they consequently started a business with mom Joanne making braided wire coat hangers. The boys sold the hangers door to door but early success soon followed for the hand working twins when orders for thousands of them began to arrive from wholesalers in Japan.

Jim would also employ the twins to help maintain the ranch, employing them to build fences and barns, and they both showed an early interest in design and interior decoration. Drew began acting in theatres and sketch comedies and Jonathan joined him as an apprentice clown, which they soon turned into another lucrative hobby, performing at events and parties and earning as much as $100 per hour. During their teenage years Drew excelled at both playing and coaching basketball while Jonathan, who had been inspired by a magic show on TV, began constructing his own magic props, eventually going on to produce fairly complex large-scale illusions in one of the barns he had built a few years earlier.

Both brothers eventually wanted to become actors, in their teenage years and as young adults they had parts in Breaker High and for Scott there was an appearance on The X-Files. Drew had minor roles in Smallville and Madison but the twins didn’t want to just be out-of-work actors struggling with financial problems. They enrolled at the University of Calgary where athletic Drew began studying kinesiology while Jonathan majored in business management. Their entrepreneurial spirit soon saw them researching real estate as a possible avenue to earn some cash on the side and during their first year at Calgary they took on the mortgage of a seven bedroom property right next door to the University for a down payment of just $250. The twins cleaned the property up and lived there while sub-letting the remaining five rooms at a profit of $800 per month. Just one year after purchasing the mortgage they sold the refurbished building on and cleaned up a tidy $50,000 profit for their efforts.

Realizing that flipping real-estate was a lucrative venture, the pair continued buying and selling properties on, usually with a hefty profit after a few minor repairs had been made to a building, but after becoming tired of having to rely on realtors and numerous disagreements with them, Drew decided to become a licensed real estate agent himself while Jonathan left his business management studies and instead headed for the Southern Alberta Institute of Technology to gain a degree in design and construction, eventually becoming a licensed contractor.

The Scott Brothers and The Real Estate Business

The Scott twins still had their hearts set on show-business as an eventually career and in 2002 they co-founded an independent film production business, the Dividian Production Group along with their older brother James Daniel, known as J.D, but in 2004 they expanded their lucrative real-estate activities by founding Scott Real Estate Inc, a business that offered services for purchasing, selling and renovating properties, alongside consultations on design for customers. The new venture proved so successful that it eventually operated offices in Calgary, Vancouver and Las Vegas. The business soon employed dozens of people at various locations, but still the lure of show-business was calling to both brothers.

In 2010 Dividian Production Group became Scott Brothers Entertainment and after filming a pilot for the Property Brothers show, it was eventually commissioned for a whole season by the Canadian broadcaster, W Network. The show became the highest rated show for the network overnight and was quickly snatched up by HGTV for a second series. Even though HGTV had originally turned down the pilot they rapidly distributed the popular show nationally throughout the US.

Property Brothers has now in 2018 enjoyed a run of ten seasons, and it has consistently ranked number one in HGTV’s ratings, by season five it was viewed by an audience of over ten million and has since been nominated for a number of awards, including a nomination for the Outstanding Structured Reality Program at the 2015 Emmy Awards.

The popularity of the Property Brothers show and the Scott Twins themselves seems to know no bounds now in 2018. Their initial reality show success has spawned a number of spin-off shows all of which have only increased their Worldwide popularity and recognition. Older brother JD has helped the pair gain a huge online following of over sixty million people who avidly follow the brothers large social media presence, and the number of diverse interests and hobbies the twins have continuously excelled at are almost too many to list.

The Scott Brothers – Successful At Everything They Do

Jonathan and Drew Scott are not only good-looking, famous and rich, but also stand at six feet four inches tall apiece, and if that wasn’t enough to deter any possible troublemakers, they also happen to be Karate black-belts too. Their Scottish heritage has resulted in competitive bagpipe playing and the musical aspirations don’t end there, in 2015 they began recording as The Scott Brothers and have now released four country-themed tracks, most recently a cover of Flo Rida’s ‘My House’ in January 2017, with all proceeds from the sales going to a children’s hospital charity.

The property brothers unsurprisingly have gained legions of female fans who no doubt will be interested to hear that the pair were once underwear models, and although they won’t disclose too many details about exactly who they worked for, they have admitted that there are still pictures of them only just dressed somewhere out there on the internet, but before you depart to google to research that part of their pre-fame lives, there are even more wholesome facts about them both you should hear. The brothers never argue, instead taking a mature approach to disagreements by discussing them and just moving on instead of letting tensions build. Athletic Drew follows an extremely healthy lifestyle and still trains four or five days a week and Jonathan is just a big softie when it comes to little dogs. He is inseparable from his miniature canine companions and frequently travels everywhere with them, even taking them on set with him. In conclusion I can only say that not only do the Scott Brothers seem to have it all, they’re also pretty nice guys as well.

Jonathan was once married, but has now divorced. He explained in a 2013 interview that he and his former wife were both very young and although the marriage didn’t work out, they both remain good friends. Jonathan, who once turned down an appearance on The Bachelor TV show, because he didn’t find the thought of dating twelve women at the same time too appealing, is currently dating a former Canadian radio show producer Jacinta Kuznetsov who now works as a development producer at Scott Brothers Entertainment. And I’m sorry ladies, but Drew is also blissfully happy romantically too, in December 2016 he became engaged to his long-time girlfriend Linda Phan, who also works at Scott Brothers Entertainment as the Creative director of the company.

What Were The Property Brothers’ Annual Earnings in 2017?

The Scott brothers are believed to earn in the region of $50,000 each per episode of their shows, and also receive a reasonable income from their own production company. In 2015 they launched their own outdoor furniture business on QVC, Scott Living, and in the first twelve months of business they notched up sales of over $100 million from the brand, with further lucrative profits being gained from the luxury brand Dream Homes, which supplies custom architecture and innovative design for property owners with multi-million dollar budgets. The brothers can command fees in excess of $60,000 for speaking engagements and in 2015 they published their first literary effort, The Property Brothers’ Ultimate Guide to Finding & Fixing Your Perfect House, which predictably for these consistently successful siblings, shot straight onto the best-sellers list. With all these, and numerous other income streams their yearly earnings can only be guessed at, but an estimate of $5 million apiece annually is probably still quite a conservative one.

Where Do Jonathan & Drew Scott Live?

In 2011 Jonathan and Drew sold their individual homes and purchased a 5,400 square foot property in Las Vegas for the knock-down price of $400,000. Their fourth TV series, ‘Property Brothers : At Home’ was based around the $2 million worth of renovations that the pair undertook at the property. The home now boasts a games room, putting green and basketball court, as well as a swimming pool complete with a two-storey high water slide and a guest house for visitors.

The Scott twins have been blessed with more positive attributes than most of us could ever hope to accrue, but both have also been active in giving something back to those less fortunate than themselves. Jonathan takes an active role in youth charities, occasionally performing magic shows at children’s hospitals, as well as being a Global ambassador for the anti child-labor organization World Vision. He took part in Michelle Obama’s Let’s Read Let’s Move campaign in 2016 and has worked alongside Drew with Artists for Peace and Justice to raise standards of health and education in third World countries such as Haiti. Drew is also a Global Ambassador for World Vision, and actively works in initiatives that promote better education for underprivileged children in both the United States and in less fortunate countries. He is also passionate about the environment, particularly in regards to the use of solar power and has written a documentary about the subject that is currently due to be released sometime in 2018.