Mr. Green Tea Update – What Happened After The Profit

Mr. Green Tea Before The Profit

This family-run, second generation ice cream company began in Keyport, NJ 50 years ago. They craft handmade, gourmet ice cream, and mainly sell it wholesale to Asian restaurants in the area. The mainstay of their flavors is the kind you would see in upscale Japanese restaurants, such as green tea, red bean, and ginger ice cream. Santo Emanuele started the company in 1968 with his oldest son. Richard was next in line to take over the business after his father and brother died. Michael Emanuele, Richard’s son, came along to help.

Although Mr. Green Tea generated over $2.5 million in sales last year, they are having trouble planning for the future of the business. Richard wants to stay safe, while Michael wants to take the company to a new place. Marcus believed that Mr. Green Tea was capable of becoming a $50 million business, but not if they stayed stagnant. They needed to be more open to change, and bring out some new flavors. Let’s see if Marcus can help Mr. Green Tea reach new heights.

Mr. Green Tea on The Profit

Marcus arrived at the offices for Mr. Green Tea in his red sports car. He greeted Lori, the receptionist, and the general manager. He went to the back office to meet the father and son pair, as well as the operations manager. 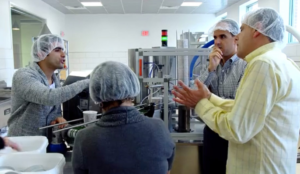 Michael, who was the Vice President, told Marcus that they did not make the ice cream in-house, choosing instead to deal with a co-packer. They would make trips to visit the copacker and check up on quality control, but they also paid a 20% margin of their sales in exchange for the co-packer making the ice cream. Richard claimed that Mr. Green Tea had grown an average of 20% per year, and the only reason that they were not growing more is that they could not fill the orders. A common problem with using a co-packer is that you only had a certain time slot in which to get your orders filled, which did not allow for expansion.

Richard told Marcus that he was very conservative, which made him nervous about building a new facility to produce their ice cream. He wanted to make sure that the business was there before he spent the money on the ice cream production warehouse. Michael claimed that Mr. Green Tea was not as profitable as it could be, and expressed concern over a bigger company taking them over.

Lori walked everyone back to the test kitchen area, where they did quality control. Marcus was shown the three flavors of ice cream that Mr. Green Tea sold – ginger, red bean, and green tea, and sampled them. He thought it was unacceptable that they still only had three flavors of ice cream after being in business for so long. He wanted to broaden their appeal and expand their flavor selection. Richard informed him that it was very expensive because they had to purchase the ingredients, then run it through their co-packer, and test it. Going through the entire process would cost upwards of $10,000.

Marcus noticed that while Michael had many big ideas, he did not pay attention to the numbers. The math of it all was vital to Marcus if he was going to make a deal. Before investigating into Mr. Green Tea’s daily operations, Marcus tried their mochis. These were little individually wrapped balls of ice cream with a sweet rice flour coating. Marcus made the point that they could easily market them to stores. Next, Marcus had the operations manager walk him through the daily process of Mr. Green Tea. He was shown the freezers and was told that there were three trucks that picked the ice cream from the copacker.

Michael told Marcus that they need the money to build the facility to quadruple their ice cream output. Michael, Richard, Lori, and Marcus went to the building they were looking at to build the facility. Richard had nothing positive to say about it – it had been damaged in the storm, and he was afraid of the cost of the work. Michael said he would just jump in, and start refurbishing it for their needs. Marcus stated that the building was a total mess, but they would be able to fix it.

Marcus had them go through the numbers, and he decided that it would be the best thing for them to buy the building and get to work. He told them that their process was broken, and they needed to stop giving so much margin to the co-packers. He was offering them capital without pressure – he offered them $600,000 in exchange for 35% equity. Marcus told him that his offer was fair and well-thoughtful, but Richard wanted more time. Marcus displayed the check for $600,000 and left the room so that they could talk it out. Michael wanted to take the deal because it would expand the business. Richard was concerned about the percentage, and he walked out of the room.

Michael was concerned that his father was too comfortable with mediocrity, and he was hungry to succeed. He told Richard that it was unfortunate that he was in charge of the company because he was strangling the progression of the business. Richard took offense to his son speaking to him that way, and Michael walked out of the room. Later in a meeting, Richard told Marcus that he did not expect a deal so soon. Marcus looked confused and asked what questions he would be about to answer for Richard. Richard was concerned that the day to day operations would change, but Marcus assured him that they would not. With a little more deliberation, Richard shook on it.

Marcus informed them about the stipulation that he would be in charge for a week, and Richard accepted it begrudgingly. Marcus said that he wanted to build the new facility and expand their product line to make Mr. Green Tea a household name. He also wanted to see that the relationship between Michael and Richard improves. Marcus told them that the whole foundation being based on Mr. Green Tea was short sighted, and Michael said that he had been dreaming up a gelato company. The name would be Solo Gelato, and they would have “one bold flavor.” Marcus told them that he liked that idea. Of course, Richard was hesitant.Marcus threw out his idea for a new name. He liked Keyport Creamery, which Michael loved, and Richard stayed sullenly silent.

Next, Marcus had the pair call the bank to make an offer on the building for the facility. Michael offered the bank $200,000, which the bank was unwilling to take. When Michael was having difficulty negotiating, Marcus stepped in to see if the bank would accept his offer to buy the bank note rather than just the property itself. This is an advantage because it allowed the bank to walk away clean, and it gave additional collateral properties to Mr. Green Tea that they would be able to liquidate. They made a deal with the bank that made everyone happy.

Marcus brought the sales agreement for the building to Richard, who wanted more time to look over the contract. Marcus informed him that there was a cleaning crew coming the next morning to start work and that he needed to make a decision fast. Richard refused to sign, so Marcus took him on a walk to discuss the plans. Richard expressed that he was overwhelmed, and Marcus reassured him with the economics of it all. Richard nodded, said that he was ready.

Marcus needed to meet with Michael to discuss how much the buildout was going to go over the original price. He told Michael that he did not appreciate the doubling of the numbers, and Marcus felt like he was making a bad deal. He wanted Michael to assure him that it was never going to happen again. Marcus went to the building after Michael had it cleaned, and he was very impressed with the building, and Michael’s plans for it.
Let’s take a look and see if Marcus’s additional investment worked out. 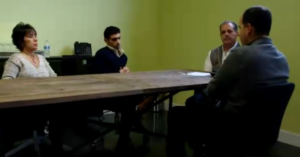 Since appearing on the Profit four years ago, Mr. Green Tea has finished their ice cream production facility and began expanding their flavor selection. Some of the new flavors include black sesame, chai latte, and fortune cookie. Their sales volume and valuation have both increased substantially. Marcus is still involved and continues to provide updates on The Profit.