Located in Key West Florida, Key West Key Lime Pie Co. It is co-owned by Jim Brush and his girlfriend Allison Sloat. They started the business with a mere $1200. Since then, they’ve been named the best pie by American Pie Council which is a long way from selling pies on the side of the road. Although they generate $1.4 million in sales, they can’t turn a profit. They have multiple locations that are each sucking up resources, including a shipping facility that doesn’t make any money at all. They are struggling to pay all of their bills, and have a bunch of dedicated employees on the line if the business folds.Key West Key Lime Pie Co. needs to get their act together. 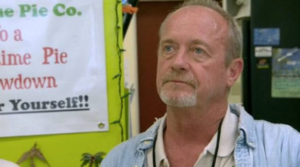 Marcus walked into Key West Key Lime Pie Co. and took a look around. The first thing he noticed was an abundance of things cluttering up the shelves, but he didn’t see the pies. He shook hands with the owner, Jim, and asked if the products on the shelves were made by Key West Key Lime Pie Co. Jim said that they were not. Marcus pointed out that retail margins on the other key lime products were not great.

Marcus asked to try out the pie and wondered what it was made from. Jim explained that it was made from condensed milk and a powdered pie filling, and a pre-made crust. Marcus said that he thought that an award winning pie would have natural ingredients, but recognized that their pies did have good margins.

Jim walked Marcus back into the kitchen, where the employees were arguing about running out of shrinkwrap. Jim asked the employees what happened, and they told him that they had warned him about the short it’s two weeks ago. He called them liars. Jim asked an employee to order the shrinkwrap, and she pointed out that they might not have enough money to cover it. Jim told her not to worry about that, and then walked off in anger throwing a water bottle. When Marcus asked him about it, Jim told him that he had control issues.

Marcus introduced himself to Tami, the employee who was ordering the shrinkwrap. Tami was very pregnant, and Jim said that he was only paying her $300 a week. Marcus wanted to find out more about Tami’s role in the business. Tami said that she was managing ordering, as well as staffing, human resource issues, and employee issues.

Marcus let Jim know that he wasn’t able to invest in something that wasn’t proprietary. He said that he wanted to look people in the face and tell them that they had something special and unique. Marcus went down to the Big Pine store to me the co-owner Allison, as well as check out the other location. Allison explains that her store does a small percentage of the sales, but also completes all of the shipping. Jim said that the store does 10% of their total business. Allison told Marcus that they only make pies in the Greene Street location.

Marcus sat down to have a meeting with Jim and Allison. He commanded them on their $1.4 million business. Marcus said that he was a little disillusioned by the product, since it wasn’t proprietary recipe. He explained that he wanted to partner with people that have the best product. Marcus let Jim know that he didn’t have the process in place to be successful. Marcus offered them up to $450,000 in order to satisfy the payables, build out the Green Street location as long as they made a proprietary recipe. He wanted 51% equity in the business.

Jim was very opposed to giving up control of the company, but Allison was not. He said that he didn’t want to give up what he started to someone else. His temper starts to flare up. Marcus offered Jim one dollar per pie sold for the rest of his life. Marcus asked if he wanted to flip the equation so that he got 49% and dollar pie. Jim said that he’s been controlling his whole life, and Allison asked how that was working for him. She urged him to take the original offer. Jim took the deal, and they all shook on it.

Marcus gather the employees to let them know about the deal. He let them know that he was 100% in charge from now on. He explained that they are going to be a pie-making company instead of a pie fabrication company. He said that he wanted a flagship store people want to sit. Marcus recognizes that all of the employees of Key West Key Lime Pie Co. were hard workers, and he wanted to give them up a reward for every pie that was sold.

Marcus started to clear out the small margin generic items from the store. Want to use the space for faster moving products such as the pies. Jim started to protest, asking if Marcus did the demographics on people who wanted to buy a key lime soda and key lime bars. Marcus sarcastically asked him if he needed help for his amnesia since Jim had agreed that they weren’t going to sell anything that they didn’t make. Tammy agreed with Marcus, saying that customers can purchase the key lime stuff everywhere.

Tami made up signs discounting everything down to a dollar. Marcus reassured Jim that he would make Jim a millionaire, but he had to trust the process. He rented out a commercial kitchen and hired three chefs in order to make a new product. Jim started to protest that his product was just fine, but Marcus pointed out that he only sold 40,000 pies a year. Jim wasn’t tapping into the Key West market.

Jim had nothing nice to say about the chefs’ creations. He went around criticizing each one. Marcus had her mind him that it was the consumer’s opinions that mattered since they were the one who pays the rent and signs their checks. Marcus wants to take all of the sample pies back to the store and let people try them. The employees start sampling everything, giving their opinions. Marcus discovered that Jim made a crust himself for special events. Marcus said it was his job to figure out how to mass-produce the crust, and he wanted to try out Jim’s crust.

Marcus informed Allison and Jim that the Big Pine location was going to be closing that day since it doesn’t make any money, and actually loses $25,000 a year. Jim asked what he would be doing, and Marcus said that he wanted him to make a pie crust, and then go out on the road to sell pies to stores and other people. Jim was upset about the loss of control. He told the employee working there that he was out of a job, but Marcus let the employee know that there is going to be a transition plan.

Marcus and Jim went back to the main location. Marcus said that he wanted reclaimed wood everywhere to get more of a natural Key West feel. Marcus outlined the rest of his plan for the main store to a contractor. He wants maximize the floor space for sales, and he also want to bring the kitchen up so that customers could see how the pies are made. He wanted consumers to understand what goes into each pie. He thought he could increase their margins dramatically.

Marcus spend over $200,000 on the renovations, and when he came back to check on it he was really pleased. They now have a comfortable seating area to accommodate more customers and profits. They have a new dessert station and a beverage bar to replace all of the old retail products that they didn’t actually make. Marcus tasted the new pie, and he liked it. He thought the new pie tasted great, and he thought there is a large market for natural pies. 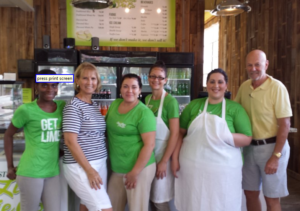 After the renovation, Key West Key Lime Pie Co. had its grand opening. Lots of customers came in, and expressed interest in the newness of the business. Tami was thrilled with her new position. She liked making more money and also having the time to spend with her children. Even Jim was pleased with the new business. Jim said that he even agreed with getting rid of all the other stuff that they didn’t actually make. He recognized that people were saying that all they wanted was the key lime pie. Marcus acknowledged that Jim was acting like a completely different person. It seems like The Profit was the best thing that could happen to Key West Key Lime Pie Co. You can learn more about their company on their website by clicking here.