In America, we often use the saying go big, or go home. For some it appears they misheard, as they instead went big when making a home. Whether built by industrial age tycoons, modern industry innovators, or politicians of national or international fame, America has some of the biggest houses around. But who takes the title of the biggest? Here, we take a look at the biggest houses in America. For the purposes of this list, the houses listed do not include secondary structures or the land on which the house resides and can include those houses not owned by private individuals. 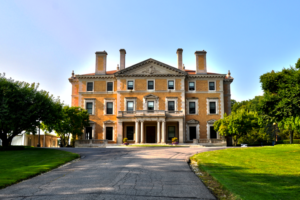 Starting off our list is the head house of the Sleepy Hollow Country Club, a structure built in 1895 with a total square footage of 70,000. Currently owned by the aforementioned Country Club, and built for Margaret Vanderbilt Shepard, this Briarcliff Manor, New York dwelling has plenty to offer. Inside the huge Georgian Revival façade lay 16 bathrooms, with 65 rooms all tucked into 3 main stories. Also inside are a lare number of fireplaces (several made of carved marble), painting rooms, a library, and coffered cielings. Making this one of the classiest buildings in New York. A joke often made by people who visit this home is that the kitchen pantry alone is about the size of a New York Apartment, offering plenty of space for the house chef(s). The architects of this home have been credit as, at different times, Mckim, Mead & White or Stanford White. 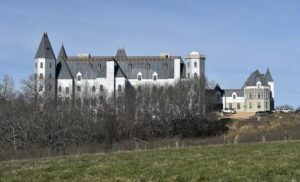 Next in our list of the biggest homes in America is a relative newcomer, the Pensmore estate. Having started gathering construction permits in 2008, the owner, Steven T. Huff comes from an unusual background for owning such a large house: A soldier turned intelligence officer turned business owner. The house itself is 72,215 square feet, and made in a châteauesque style, with some key differences. The first is that the house is being made of an insulated concrete form with a few proprietary materials like the University of Michigan developed Helix steel fiber. According to documents, the house is supposedly able to take nearly every natural disaster possible in the Highlandville, Missouri region, and has a net zero carbon footprint when it comes to climate control, as a result of construction, software integration and architecture. This big house is not only a proof of concept for residences, but according to Huff, also one for commercial applications. 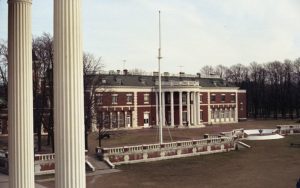 Another New York Manor to make an appearance on the biggest homes list. Indian Neck of Oakdale, New York was created for Frederick Gilbert Bourne in 1908 and now belongs to St. John’s University under the name Indian Neck Hall. Made for the man who worked as the president of the Singer Sewing Company, often cited as the first big international corporation and the first to install a company wide installment payment plan that has become the standard for telesales. The home itself is built in a federal style whose 75,000 square feet have lent itself to being a military school and now part of the St. John’s campus, after Singer Castle had been built for Bourne.

If it’s Baroque (particularly English Baroque), don’t fix it. Another Vanderbilt estate found and found in Madison, New Jersey, Florham’s 110 rooms take up 80,000 square feet. Another McKim, Mead and White creation, the façade of this building simply exhudes a grand aura, and the inside includes multiple renaissance fireplaces and a ballroom after the Louis XV style. Built to resemble in a way the castles and lavish estates of the old world, the “royalty” of industry had decided to give this home to the Fairleigh Dickinson University near the twilight of their reign. This property was built for what would amount today as just over $145 million. 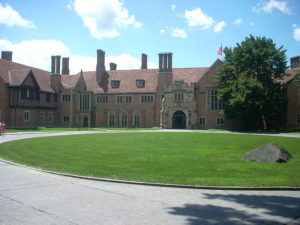 While the days of the Golden auto age of Michigan has long gone by, there is yet at least one great monument to it in the Meadow Brook Hall house, the largest house in Michigan and one of the largest houses in America. Built for the founder of the Dodge Motor Company, John Francis Dodge alongside his wife, Matilda, this house is a massive 88,000 square feet. Built in the Tudor Revivalist style, this house boasts 110 rooms and was designed by William Kapp. After the death of the owners, the house and subsequent estate was donated to the University of Michigan, who keeps up the residence as a museum, alongside the nearly 1,500 surrounding acres of land, which has also received the distinction of being a National Historic Landmark. 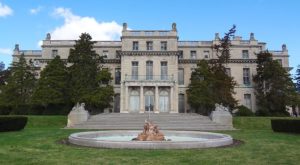 Making it halfway to our list of the biggest houses in America is Shadow Lawn, located in West Long Branch, New Jersey. While this 90,000 square foot house is one of the most classically beautiful on this list, it’s also had one of the cheapest per square foot selling prices in the history of homes. During the Great Depression the owner, Hubert T. Parsons, the president of the F.W. Woolworth company, would come onto incredibly hard times. As an act of desperation, he would sell this massive house at one tenth of a penny per square foot (around 100 dollars), not even accounting for the grounds or beautiful fountain. This mansion was used in the 1982 film Annie, and boasts 130 rooms overall. The Shadow Lawn estate has been in the care of Monmouth University since 1956. 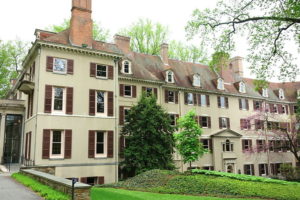 Now titled the Winterthur Museum, Garden and Library, the former home of Henry Francis du Pont is now one of the largest lands registered as a U.S. Historic place in Delaware. Though many of the homes on this list were repurposed as a museum after their donation, this estate had a great deal of antique art and exotic horticulture since its construction in 1932. Currently, 175 rooms of the 96,582 square foot house are open to public viewing, as well as a library which holds over half a million documents and historical volumes. While on its own as an estate, the University of Delaware does help keep the art of the Winterthur House preserved properly for enjoyment for years to come. 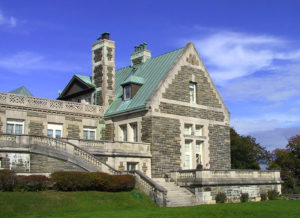 Making to the 3rd spot on the largest homes in America, the Arden or Edward Henry Harriman estate is a whopping 97,188 square feet on 450 acres, which at the Harriman’s height of prominence was extended to 40,000 acres. A former railroad head, Harriman and his wife Mary centered their house in Harriman (who would have guessed?) near Newburgh, New York. Before being turned over to the Research Center on Natural Conservation, the couple offered the house as a military hospital to the Navy in World War 2, and the lands near them to become a national park also bearing their name. In the 60’s, the home was recognized as the nation’s first convention center.

Runner up to the largest home in the United States is the appropriately named Oheka Castle. Built in Huntington, New York and ranking in at a jaw dropping 109,000 square feet, Oheka has been the home to many a stately event. Built for the German investment banker Otto Hermann Kahn (from which the name derives), it has been a favorite of many Hollywood directors for a scenic shot or two, being featured everywhere from Citizen Kane to Cruel Intentions and sports over 125 rooms within it. After restoration by Gary Melius in 1984, the site has also been used by celebrities and people of power to get married, including Kevin Jonas and the ill fated Anthony Weiner. Melius still owns this 1919 estate, and uses it primarily as a luxury hotel spot and for various filming needs.

Topping off our list of the top 10 biggest houses in America is yet another Vanderbilt house, this time in Asheville, North Carolina. Developed by Richard Morris Hunt, this house at 135,280 square feet is about as big as you can get. Built in the 1890’s as part of the so called Gilded Age, this imposing structure holds over 4 acres of floor space inside of it, and totally out at 250 rooms overall. These include four floors, a Bachelor’s Wing (Billiard and game rooms), and a basement which boasts a 70,000 gallon heated pool, fitness equipment, and one of the first private bowling alleys. Unsurprisingly, this house also has the biggest basement in the US, with multiple kitchens alongside aforementioned accommodations. Amazingly, this house has remained in the Vanderbilt family, now belonging to William Amherst Vanderbilt Ceclil, a Harvard trained Businessman.