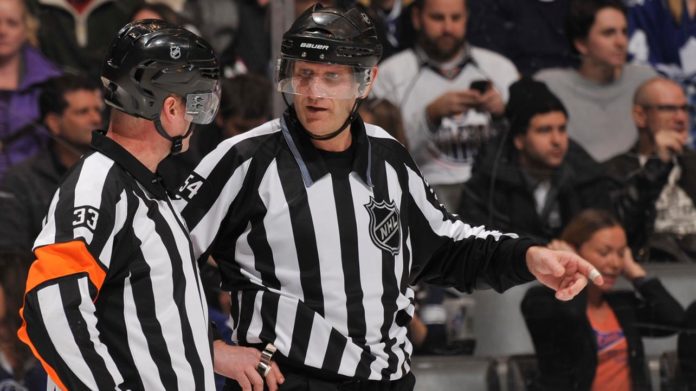 While many may consider hockey players to have the roughest job on ice, one could presume that the refs, with considerably less padding and more anger leveled at them, may in fact hold this title. Facing fans and players alike to uphold the rules and ensure the fair play of a game, the Ref is absolutely needed, but often unthanked or ever hated for the slightest mistake. If this has not phased your interest in the field yet, you may be in for some big earnings. Here, we take a look at what the NHL Referees make in 2017, and how to become a referee for the hottest game on ice.

At time of writing, the average salary for a full fledged NHL Referee is around $185,000 with a high level of variance between $115,000 and $255,000 per year, depending on experience and amount of work put in per year. On average, one could expect around $1,500 to $3,000 per game. This does not include however, lower ranks of regulatory personnel, often called linemen who can make between $70,000 to $100,000 per year. This means that for most NHL referees, they will end up making more than the dentists that so many hockey players turn out to need as a result of some illegal strikes. This is particularly impressive, as outside experience and laser focused education, this job does not require a great deal of education, making for a great return on investment. Do keep in mind though that if you are in a country that requires self paid insurance, insurance rates for NHL Referees may be considerably higher than on average, though not so high as to nullify your earnings by any stretch of the meaning.

How to become a NHL Referee – Do You Need to Go to School?

To start being a NHL Referee, several steps have to be made and dues be paid. Step one is you’re going to have to know how to ice skate about as well as you can walk, and be able to focus on everything but your own feet. Once you get that down, take a look into any local officiating governing body near you, whether that’s the USA Hockey division on Canadian Hockey Association. This will give you some basic ref training to help you to learn how to regulate and allow you to rub elbows with pros. After this, simply keep regulating as you get chances to, and attend camps to refine your skills, especially those training camps held by the NHL which often contain officials who are in practice or retired. After this, it’s more about getting the attention and chances needed to push your career forward, which means a lot of skating, observation, and fair calls. There is a good chance that most NHL Referees will need to spend considerable time working the minor leagues before they can get big pay. Some of these leagues can include the AHL, ECHL, CHL, UHL, USA Hockey Association and the Canadian Major Junior Hockey League, which is the minor leagues to the NHL’s major leagues. Even when finally entering into the NHL, you will more likely than not start as a lineman, which does not pay as much nor have as much responsibility, though fan and player animosity may be just as high. If you keep to it however, you are given a good chance to make it to the big time in terms of pay. Do expect on this job to be examined regularly both for health and fitness, and knowledge of rules reasons as the NHL does pride itself on keeping a staff who know what they’re doing so that the players are allowed to do their jobs and the crowds to get as excited for their teams as possible, without devolving into chaos.

This has been our article on how to become an NHL Referee and how much they get paid. If you wish, feel free to comment about your local hockey leagues where people can find how to become referees in their general area.