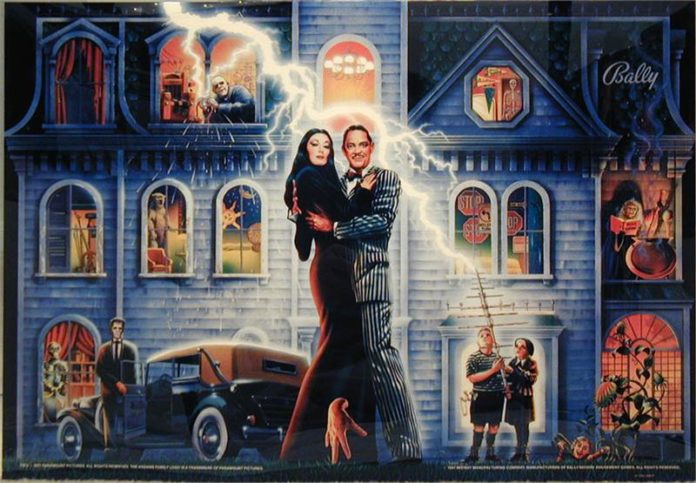 If you are an aspiring Pinball collector, or just someone who has an appreciation for old games in general, you might be wondering “what are some of the more common pinball machines?” Thanks to the plethora of internet resources available to would-be collectors, it’s easy to see just how many machines are located within the continental United States and where they are located at. With some data from websites like Pinside and Pinball DB, I have compiled a list of the most reportedly-owned machines in the main United States, which means that you’re more likely to run across these machines than you are any others.

Do note that this list consists of both electromechanical and solid state games – electromechanical games actually use switches that send pulses for scoring, events, multi-balls and other things, while solid state games are typically more hardy and easier to repair than their counterpart. One of the other important things to keep in mind that the initial production volume is irrelevant and does not relate to the number of machines that can be found for sale, trade or exchange.

Unsurprisingly, The Twilight Zone pinball machine, created by Bally and released in May 1993, is one of the most frequently owned machines with more than 10,000 people reporting in that they own the machine. This was created after the famous TV series that aired from 1959 through 1964 before following different shows. This pinball machine is unique in that it had the most patents for its time and retained that title until Pinball Magic was released by Capcom in 1989. The Twilight Zone is a solid state game with a production line of 15,235 total units produced. There are four flippers, two more than your average pinball game (in the upper left and right sides of the field for more precision shots), and the estimated value of a game is anywhere from $5,500 to $6,500, depending on the condition of the machine and if any work has been done. The Twilight Zone also has a wide body, meaning that the field is actually bigger than your typical pinball machine. Multiplayer is an option on this game, as well. 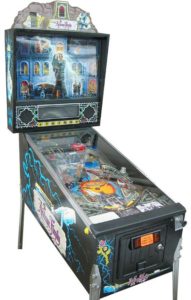 3. Star Trek: The Next Generation

Set phasers to kill – Star Trek: The Next Generation was released in 1993 and is one of the most popular machines for would-be collectors to start with. The Next Generation is a solid state game with more than 11,700 units produced and sold. This Star Trek pinball machine is actually one of the more affordable machines, costing anywhere from $4,000 to $4,500, which is a much smaller range than most pinball machines have. This is a wide body machine with a bigger playing field, and the flavor of the game is to travel into the unknown frontier of space. This game is one of the more smooth-looking games for the period it was released, as it has numerous LED strips that flash between multiple color combinations to light up the cabinet with an awesome atmosphere. This game has an interesting 3 flippers, with 1 flipper being used for a minigame in the machine, and can support up to 4 players.

Have fun storming the castle! This machine by Williams Electronic Games, Inc, was inspired by no particular intellectual property – instead, it is what is called a “re-theme” where a game maker will repurpose a field’s design for another flavor/intellectual property. However, this machine is incredibly valuable and costs anywhere from $8,200 to upwards of $9,700, which is a huge range for pinball machines! This solid state game is a normal body cabinet and lets up to four players enjoy. The field is incredibly bright and colorful and reminiscent of a medieval castle. The main objective of the game is to defeat the king and restore order to the land – will you also slay the evil dragon and save the damsels in the tower? Only 4,414 of these machines were produced, but most collectors are willing to part with them due to the volatility of the price and the nature of repairing some of the most intricate bells and whistles. 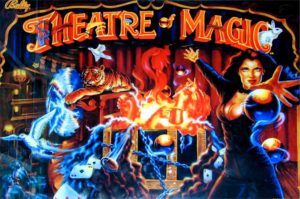 Welcome to the Theatre of Magic! While not inspired by any particular intellectual property, this game features a loose magic-show theme. This game was actually designed by John Popadiuk, a noteworthy Pinball designer who was around from the 1970s up until the late 1990s. Produced by Bally in March of 1995, more than 6,600 units were produced. You can find these units available for sale for anywhere from $5000 up to $6000, and this game is a solid state game with no intricate bells or whistles aside from the bash toy (the bash toy is actually one of the more prominent points of the game, being named “The Magic Trunk.”). There are plenty of magic tricks in this game that will “warp” your ball from point to point, which has given the game so much replayability. This game is also one of the first to feature a video mode, as well as a virtual pinball minigame that is played on the dot matrix display.

Watch out, Indy! This topical game was released by Williams Electronic Games in January of 1993 to coincide with the expansion of the Indiana Jones franchise to television in late 1992. With more than 12,716 units produced, this game is actually more common than you think. The price is nothing terrible either, with the unit costing $5,000 to $6,000. This is also a wide body cabinet, and the field makes full use of the space; Indiana Jones tropes such as escaping a rolling boulder, swiping loot, and fighting bad guys are prominent throughout the game. This game supports up to four players, but otherwise does not have any fancy technological advancements that might be present in other pinball games around the same era. 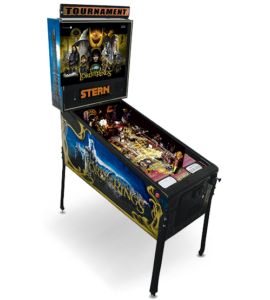 7. Lord of the Rings

I was a little surprised to see the Lord of the Rings machine on here, but after some research, I now understand why – The Lord of the Rings pinball machine is a great game, but there are better games out there. Very rarely does this machine have a permanent place in someone’s collection – EVERYONE knows about Lord of The Rings, which was easily one of the biggest theatrical releases in the 2000’s. This machine was produced in November of 2003 to coincide with the final movie of the Lord of the Rings trilogy, and was created by Stern Pinball. This game encapsulates the journey of The Fellowship of The Ring, and players will even have to go and defeat The Balrog to retrieve The One Ring. This game features the first prominent use of magnets to manipulate the ball throughout the field without input from the player. The Field is incredibly colorful and ranges from the colors of Hobbitville, all the way to the dark and dreary browns of Mordor. This game only costs anywhere from $5,000 to $5,800, and had 5,100 total units produced. There is also a Limited Edition version of this game which costs around $2,000 more, but only 500 of these elusive Limited Edition units were produced.

Wanna go white water rafting? If you can’t, why not do the next best thing and go white water rafting on a pinball machine? Sure enough, White Water, produced by Williams Electronic Games, is all about rafting down a river. This solid state game was produced in 1993 and a little more than 7,000 units were produced. This game utilizes ramps, railings and scoops to their maximum effect, and your ball will frequently be taken throughout the entire play field while you are helpless just to watch. This game is completely original and was not re-themed or repurposed. The game is otherwise not very noteworthy, other than the acceptable price of $3,900 to $4,500 for the machine. This is in a normal arcade cabinet body, and can have up to four players play. There is a miniature field with only one flipper in the top right corner of the game, as well.

9. Creature from the Black Lagoon 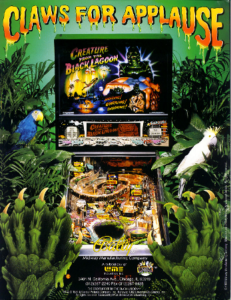 It lives and it walks – it’s the Creature from the Black Lagoon! This 1992 game released by Bally surely relates to the 1954 American horror release, which was one of the first 3D movies released and a huge technological advancement for its time. Close to 8,000 units of this game were produced; the game allows up to four players and is actually a lackluster game, with the multiball only releasing two extra balls onto the field. This game is a must-have for any horror fanatics, and is fairly priced from $4,500 up to $5,200. The game is actually a bit rare to find because it’s usually found in a permanent spot in collections because of the subject matter, which eventually inspired a golden era of “bad” monster/horror movies released in the United States from the 1950s through the 1970s. This game is housed in a normal cabinet, and actually makes an honorable mention for having the most public locations (of all the games in this list) where the game can be played.

Rounding out our list is an otherwise conspicuous machine with no real subject matter. Fish Tales, as its name implies, is a game revolved around the player being a fisher and making catches. This machine was released in 1992 by Williams Electronic Games, and costs a collector anywhere from $2,500 to $3,000 to acquire. The game features numerous holes and scoops, meant to represent the player dropping their line and waiting for a fish. True enough to the subject matter, the tagline of the game is “Catch ‘em all, hook line and sinker!” 13,640 of the games were produced, and the low price is perfect for an entry-level collector to get their own machine and finally flip their first switch to free play. This game allows for up to four players to enjoy dropping their line.