Shuler’s BBQ Update- What Happened After the Profit

Shuler’s BBQ Before The Profit

Shuler’s BBQ began in a small town in South Carolina. They soon became very popular, with people traveling hundreds of miles in order to sample their food. They have an all-you-can-eat buffet, and their specialties are ribs and pulled pork. Shuler’s BBQ was started by Lynn and Norton Hughes, and they named it after their adopted son, Shuler. The restaurant was opened in 1996 without any prior restaurant experience. The couple did have the cooking aspect down, however. They took all of the barbecue recipes from Norton’s father. The business is struggling with some issues, and Marcus was willing to help.

Shuler’s BBQ on The Profit 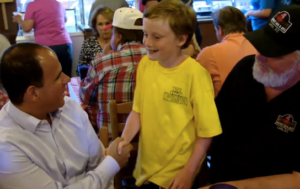 Marcus went to visit the Hughes family at the Shuler’s BBQ. He complimented them on the facility, as well as a number of customers that were enjoying the all-you-can-eat barbecue buffet. Marcus discovered that Shuler’s BBQ was only open three days a week, and they only had 200 seats in the facility. Norton informed him that on some days, it was so packed that people wrapped around the building and down the street waiting to get a taste of the local treat. He told Marcus that they could feed as many as 500 people a night. Marcus asked if they had to turn people away, and Norton admitted that they did sometimes.

Norton told Marcus that they were in line to do $1 million worth of business this year. They had a 15% margin, so the profit should be around $150,000. Norton said that they were still a mom-and-pop business, and Lynn piped up to say that they would like to be able to both take a salary and afford to pay a manager. Both of them felt overwhelmed. Lynn said that her brother-in-law’s Ewell had stepped in to take over some of the managerial duties. And Lynn said that he was an expert in marketing and had been a manager before. Marcus was willing to give Ewell a chance to take over as manager.

That night, Marcus went back to the restaurant in order to sample the buffet and meet the rest of the family. Marcus met Ewell, and you could tell that he was not impressed. He well was saying that they need to promote Shuler’s BBQ even more. Marcus was wondering where the need more marketing when the line was already out the door. Ewell wanted to expand beyond the current location. Marcus was worried that he was attempting to change what made the business successful. Marcus said that the idea of franchising was not always a good idea. He didn’t see the Shuler’s BBQ brand as universal. Barbecue flavors were too regional.

Marcus said that he was impressed by the food but he was already seeing a bunch of quick fixes that could make the business even better. He was experimenting with their point-of-sale machine, and he declared it to be too complicated. He could see that that was one of the reasons that the line was out the door. Shuler’s did not accept credit cards which Marcus deemed slow and inefficient.

Marcus met up with Norton to discuss the numbers. He saw them as having lots of potential. Marcus was alarmed that their food costs were 42%. He thought that they were paying too much for it and they were also not charging their customer enough. Norton admitted that they oh $86,000 in debt. Norton also said that they took credit cards for their catering business but not for the restaurant. Marcus was concerned that he was turning away customers by not accepting credit cards. That could lead to a large loss in the future.

Marcus met with the rest of the family to discuss the numbers. He told them that the food costs were a problem. He was also not sure what exactly Lynn’s brother-in-law was doing in the business. He seemed very focused on PR but he also wanted to be a partner. Ewell said that he wanted to focus on building the business outwards. When Marcus asked him what he saw himself doing in the business, you’ll just said that his role would depend on the deal that Marcus offered him. Marcus was confused.

Marcus told them that he wanted to build out a general store to add more profitability to the business. Marcus said that he would want 40% of the business as well as the right to distribute Lynn’s biscuits. Marcus said that he just wants to control the process 100%. Norton told Marcus that they discussed percentages before Marcus came to visit, and they want to stop at 35%. Marcus told him that his first offer was always his best offer. Norton asked him for some time to speak to his wife and hammer out the details. As the couple left, Marcus talks to Ewell as he told Marcus that he would need a salary of $200,000 in order to make the move to South Carolina.

Marcus said that his $500,000 would go towards paying down their debt and also to allow them to expand their building. Marcus met with all of the employees to announce their deal. Marcus explained that he loved the product and he loved the people. He wanted to improve the process. Marcus said that he wanted to consider opening up the restaurant another day, but before he did that he wanted to make sure that the process on the other days was perfect.

Marcus had them start weighing out the food so that they could determine a more reasonable price. Marcus wanted to raise the price of an adult dinner to $15, which would be an increase of a dollar five. That would add an additional $75,000 a year. Marcus asked Ewell his opinion, and he said that he was looking at consultants which cost $1000 a day. Marcus let them know that they didn’t need consultants since they were able to figure food cost out with the scale in the middle of the restaurant. Marcus said that he hasn’t seen Ewell do a thing to help out besides discuss marketing strategies.

Marcus discussed the Ewell problem with Norton. Norton said that he had to be very careful with that aspect because when was very fond of her brother. Norton didn’t see any conceivable way that they would be able to bring him in and pay his exorbitant salary. Marcus said that one of the problems with the family businesses that the owner feels obligated to hire someone out of the family even if they’re not a good fit for the business.

Marcus brought in someone to help when mass-produced her biscuits. They started making changes that Lynn was not a fan of. Marcus was concerned that she wouldn’t be willing to make the changes necessary eight to commercially produce her biscuits. Lynn was worried that they were changing a family recipe, so her regular customers would not accept the new taste. When looked upset, but she was willing to take a step back and see how it goes.

Marcus wants to research buying meat locally in order to save on the price. They were able to find a local supplier that would cut several dollars off of the price per pound of the ribs. Marcus was happy with that outcome. Marcus also wanted to add another register and another buffet line which would get the line moving faster through the restaurant. Marcus wanted to build a deck in order to expand how many customers the restaurant could handle per night. He also went over the design of the general store with the family.

Marcus met up with Ewell to discuss his role in the business. Marcus said that he didn’t see him taking an active role in the business, and Ewell said that he wanted to focus on PR. Marcus said that focusing on PR was fine as long as the processes were in place to support the added business. What Marcus was looking for was a manager. Ewell was not willing to compromise or do anything that wasn’t advertising. He didn’t seem to want to get his hands dirty. Marcus said not to mention Facebook to him again because he would be able to get the couple’s 10-year-old son to handle the Facebook advertising. Marcus said that when he was in he was all in and it was very different from what he’d seen from Ewell. Marcus was willing to give him a chance to lead over the day to day operations.

Marcus then had a meeting with Lynn and her mother to show her what the branding and the packaging would look like for her biscuits. Both of them were very happy with it. Marcus let her know that he was happy that she trusted the process. Next, Marcus wants to meet with Ewell to discuss the PR. Norton let him know that unfortunately, Ewell was currently in New Orleans. Marcus looked disappointed, but not surprised. Marcus discussed the whole thing with Lynn, and let her know that he didn’t seem all in. Lynn said that she was really surprised by the whole situation, and she was having trouble getting in touch with her sister. Lynn showed Marcus an email that Ewell had sent to them. It said that he was tired of doing pro bono work for the restaurant, and his time had become limited and unpredictable. Lynn was upset about the whole thing, but Marcus calmed her down.

The deck was finally finished, and it looked gorgeous. Marcus had 135-foot American flag specially made and then erected to draw attention to the restaurant. Next Marcus took the family to New York City to see that they had Lynn’s biscuits and watermelon cake in a fancy shop near Times Square. Lynn looks so happy. Marcus let her know that the cupcakes would be in all 26 Crumbs stores. Marcus is also noted that customers were moving through the line much faster, and the additional seating on the deck was filling up. It looks like with his help, Shuler’s BBQ was going places. 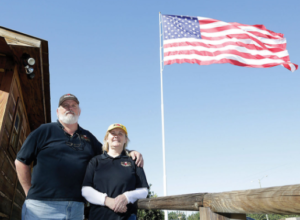 After making a deal with Marcus on the Profit, Shuler’s BBQ is still open and growing. The couple has had to make additions to their building in order to accommodate the growing business. They filled out their retail space,  The enormous American flag that Marcus had specially made for the southern restaurant needed to be replaced after a harsh South Carolina storm. They keep their Facebook page updated regularly with pictures of cupcakes and shirts that they sell at the store. According to a Yelp review written by a Profit fan, the food lives up to the hype and the reviewer also stated that the atmosphere and the people were great as well.  Out of almost 300 reviews on TripAdvisor, 66% of them were 5-star reviews.