Marshmello Net Worth 2018 – How Rich is the EDM DJ Actually? 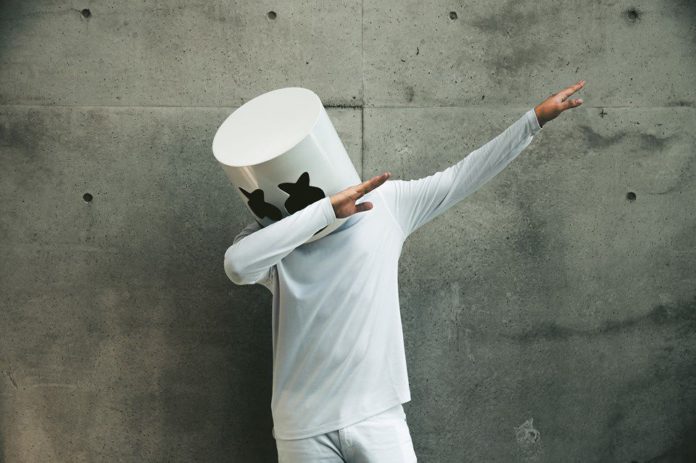 The EDM scene has many eccentric and mysterious figures, and Marshmello is one of the most talked about right now. There are just as many people trying to uncover the identity of the marshmallow-masked DJ/producer as there are people who love his music. Marshmello made his debut in June 2016 with the release of his song “Alone”. Almost overnight, the producer was enjoying the same levels of fame and wealth as the most elite DJs in the world. The marshmallow-headed producer’s incredible music seemingly came out of nowhere, and the mystery surrounding his true identity has kept his fans talking.

Although Marshmello’s career history before he put on the mask has not yet been revealed, it’s easy to tell he’s an experienced musician by listening to his music. Marshmello’s talent for creatively executed melodies with a familiar feel attracted bonded millions of people to his music. His most popular single, “Alone”, was released on in June 2016 and currently has 570 million views on YouTube. Marshmello has since pocketed massive paychecks from labels, touring, and social media as a result of this boom in popularity.

Between his debut in January 2016 and August 2017, Marshmello was estimated to have made $21 million dollars. One should make an important distinction when comparing Marshmello’s net worth to other top DJs, however: The EDM world’s leading DJs/Producers have made their fortunes over a span of many years, while Marshmello amassed a significant portion of their wealth in just a single year. The hype Marshmello has generated in such a short timespan has already established him as an elite DJ.

How Did Marshmello Earn his Money and Wealth?

The true identity of Marshmello has been hotly debated ever since his rise to mainstream prominence. However, it is clearly evident he has been producing music long before becoming popular. His music has its own unique sound, something that is exceedingly difficult to accomplish in the oversaturated EDM genre. The budding producer has also secured deals with major labels and musicians, which suggests he may have been well-connected to begin with.

Marshmello posted the track “WaVeZ” on Soundcloud on March 3rd, 2015. The track accumulated a considerable amount of listens after being posted. After a few months, his latest tracks would accumulate several hundred thousand listens shortly after being posted. As the producer began to churn out multiple tracks a month, popular producers began to take notice. Dubstep producer Skrillex reposted the song “FinD Me” after Marshmello posted it in mid-2015. The continued support of Skrillex and other prolific EDM producers gave Marshmello a solid foundation to take his career to the next level.

On January 8th, 2016, Marshmello released the album Joytime. The self-released album peaked at number 5 on the Billboard US Dance/Electronic chart. The album consists of 10 tracks which he had previously posted on his soundcloud. The two singles from the album “Want U 2” and “Keep it Mello” featuring rapper Omar Linx were particularly popular.

Marshmello made his debut on the highly influential label Monstercat in June 2016 with his song “Alone”. The song racked up millions of views within its first week, and had accumulated over half a billion by the next year. “Alone” is the first single released by Monstercat, and is the most successful release by the label in general. The single also spawned a remix competition, which was ultimately won by the future house production duo MRVLZ.

Shortly after “Alone” was uploaded to YouTube, search terms such as “Who is Marshmello” and “Marshmello true identity” spiked. During a live performance at the Electric Daisy Carnival on June 16th, 2016, Marshmello removed his mask to reveal the face of legendary Dutch DJ Tiesto. However, the reveal was later proven to be a prank – fans managed to dig up a photo of Tiesto in Marshmello’s outfit next to what they assumed to be the real one.

Marshmello announced his first world tour in August 2016. He named it after the song he would release two months later featuring singer Wrabel. He played gigs in United States, Paraguay, South Korea, China, and India during the tour. While on tour, he signed DJ and producer Slushii to his label Joytime Collective. The Ritual tour was concluded in January 2017.

On February 24th, 2017, Marshmello posted “Chasing Colors”. He collaborated with producer Ookay on the song. It featured vocals from Noah Cyrus, the younger sister of actress and singer Miley Cyrus. Freshly signed Joytime collective artist Slushii and then collaborated with him on the song “Twinbow”, which was released on March 20th, 2017.

Not even a month after the release of “Twinbow”, Marshmello released his third single of 2017. “Moving On” was posted to YouTube on May 5th, 2017. A music video was later released for the video. He later hinted at collaborations with hip hop producer Blackbear and another with singer Demi Lovato, the latter of which he performed a demo of at Coachella 2017. Before the end of July, the producer uploaded the song “Love U” for free download as a gesture of thanks to his fans.

How did Marshmello get so popular?

Although Marshmello may already have had ties to the industry, yet artists who coast by on connections rarely achieve his level of overnight stardom. His rise to mainstream is a textbook example of overnight fame. The producer’s unique approach to the budding trap genre along with his mysteriousness got the EDM community talking. He leveraged his explosion of popularity to further market himself by satiating fans with a constant stream of new music, music videos, and gigs.

Little is known about the mysterious producer’s past or true identity.The amount of high profile artists he has already collaborated with leads many to suspect he could the alter-ego of an already established producer. Fans and media outlets have also speculated he may the public face for a team of experienced producers.

Marshmello was also once suspected to be Moe Shalizi, the manager of producers Skrillex and DotCom (real name Chris Comstock). Fans shifted their focus to DotCom after Skrillex referred to the DJ as “Chris” in an interview. Stylistic similarities in the music of Marshmello and Dotcom, as well as the fact both had similar tattoos raised even more eyebrows. Moe Shazili later stated that the pair had the same name and birthday.

Why does Marshmello wear a mask?

It’s safe to assume most mask-donning musicians do so as a marketing stunt. The trick is simple but effective, and often remains a trademark even after their identities are uncovered. Marshmello has claimed that he wears a mask because people don’t need to know his identity to enjoy his music, and also that good music speaks for itself.

Is Marshmello associated with Deadmau5?

It is unknown if Marshmello was associated with Deadmau5 before becoming popular. In the music video for “Alone”, a pet rat is named Joel. Deadmau5’s real name is Joel Zimmerman. At the very least, the masked producer has acknowledged that he wasn’t the first one to wear a mask on stage.

Despite his fame, Deadmau5 has a reputation for getting into heated arguments with other producers. In 2016, Deadmau5 made several public jabs at the fellow masked producer after he was repeatedly tweeted at by Marshmello and his fans. One of the tweets read: “yes. ok. we get it. dotcom wasn’t working. you put a bucket on your head and mention me weekly. winning formula. Awesome.” The tweet was quickly deleted. However, if there’s anyone who knows about confidential information such as Marshmello’s true identity, it would be an influential producer like Deadmau5.

Marshmello can be seen playing live sets with DAW (Digital Audio Workstation) software Ableton Live in some of his photos. Some VST software instruments, particularly Native Instrument’s Massive synthesizer, can also be seen.