Tanner Fox Net Worth 2018 – How Much He Actually Makes 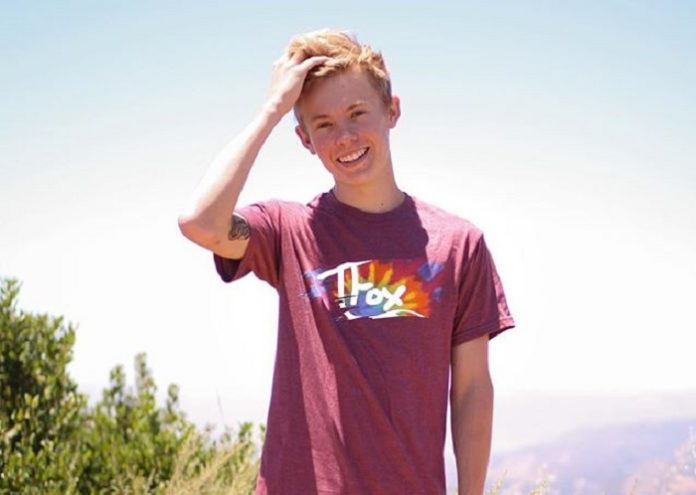 Tanner Fox is a seventeen year old professional stunt scooter rider, vlogger and rising social media star. He’s gaining followers on social media at an incredible rate and his popularity has seen his income and net worth rise rapidly during the last year. Tanner has cashed in on his online fame with a number of different income streams and now in 2018 he looks set to become a teenage millionaire before much longer if his popularity continues to grow at the same rate, but exactly how much is the gravity defying stunt master worth now in 2018? And exactly how does he make all that money? Read on to find out.

How Did Tanner Fox Make His Money & Wealth?

Scooters were even around when I was young, admittedly in those days they were generally comprised of a lump of wood with a couple of wheels nailed onto the bottom, and they weren’t exactly capable of surviving any kind of daredevil antics. Back then Evel Knievel was considered a God amongst men, and obviously we all tried to emulate him. I learned to bounce safely off of concrete with the minimum of injury and gained a heavy layer of scar tissue on my forearms that’s been useful for striking matches on ever since.

But the wonders of modern science have brought us a long way since those ancient times, the lightest scooter available today is a marvel of aluminium and carbon fibre that weighs in at just under 9 pounds. Technology has also brought us the internet, and along with it Tanner Fox, a stunt scooter rider that can use these magnificent lightweight machines to push the laws of gravity far further than they should ever be pushed. Tanner has managed to become an internet celebrity by combining his likeable personality with his incredible talent, and he’s even managed to do it without gaining any noticeable scars at all, and to top it all off he’s made a lucrative living doing what he loves to do.

Tanner Fox was born in San Diego on December 22nd 1999. He took to scooter riding from an early age, inspired by other famous riders, in particular the sensational Dylan Morrison, and in September 2011 Tanner opened his new Youtube channel ‘MTFilms’. Tanner’s first upload to his new channel came in September 2011, with a simple 40 second video featuring a snapped deck, it was short and sweet, but with more regular uploads he soon began gaining plenty of scooter fans as new viewers.

Tanner’s success is as much due to his personality as his scooter riding skills, he’s a natural in front of the camera, friendly, confident and positive, and it wasn’t long before he started to get some serious attention in the online scooter community. Tanner began uploading stunt tutorials in January 2012, beginning with ‘How to Finger Whip’ followed by a Truckdriver tutorial and several other guides for novice riders. Tanner Fox could already make those stunts look easy, and he also made presenting his videos look easy, the tutorials gained hundreds of thousands of views, the Finger Whip tutorial was particularly popular and has now been viewed over half a million times. In August 2012 Tanner got his first viral video, with his ButterCup tutorial gaining over two million views. It’s no surprise really, Tanner performed the stunt so effortlessly he made it look as if gravity had been turned off for a moment, and the improvement he had made as a rider in under a year was clear to see for all of his fans.

The scooter riding community was still quite small in 2012, but as the sport became more popular Tanner’s success on Youtube and other social media platforms began to grow rapidly. Right now in 2018 Tanner Fox is followed by almost 100,000 people on Facebook, another 400,000 on Twitter and he has over 3 million followers on Instagram, but it’s Youtube where his popularity has grown the most. He has gained just under a billion views on the channel, and he’s got almost six million subscribers, which is all the more impressive if you consider he was celebrating reaching 100,000 subscribers in December 2015, less than two years ago. The videos Tanner produces now are slick and professionally edited, and as Tanner has got older his confidence has grown and he’s grown into a much-admired internet personality, with an overwhelmingly positive fan-base that matches his own cheerful demeanor.

Tanner’s success on Youtube is hugely financially rewarding for him, he uploads almost every day and usually gains anywhere from 500,000 to three million views on most of his videos, which earns him in the region of $1,000 a day on average. Tanner Fox has also managed to become far more than just an insanely talented scooter rider, he concentrates these days on vlogging and videos covering his exciting successful lifestyle. His videos have been sponsored by the likes of Lucky Scooters, The Grind Shop and Root Industries, and of course if you have ten million followers across a number of social media platforms, then a range of branded merchandise is the next logical step.

Tanner promotes a huge variety of TFox branded merchandise on his website, TFoxbrand.com, he sells the obligatory scooter accessories, but also T-Shirts, backpacks, stationary, school supplies and a huge number of other items, he even has an exclusive range of limited edition items that is more varied than many other online stores. It’s noticeable that for the exclusive branded items of a popular internet celebrity the prices are quite reasonable compared to the over-priced goods that many other online stars offer for sale. Tanner Fox seems to be doing everything just right now in 2018, his fans love him and his content is a great showcase for a rising young star with plenty of personality. Tanner Fox is still only 17 years old but he’s a lot more mature and advertiser friendly than some of the other rising internet personalities in the spotlight right now. All in all the future looks bright for Tanner Fox, and he still hasn’t got a scar on his body, which doesn’t make me too bitter because after all, I can always strike a match any time I need to, which is the only advantage over Tanner I’m ever likely to have.

In January 2017 Tanner tweeted that he’d just realized he was the only one of his friends that didn’t have a girlfriend, and he announced that he was ‘taking applications’ for the job. Unsurprisingly the tweet received quite a bit of attention, with over five thousands likes, and Tanner also had quite a lot of ‘applications’ in reply, but in mid 2017 you could almost hear the hearts breaking all over America when Tyler hooked up with beautiful Instagram star Taylor Alesia. Since then Alesia’s popularity has grown rapidly too and she now has over one and a half million followers on Instagram and over 300,000 subscribers on Youtube. The couple frequently appear together in videos, most recently when Taylor tried Tanner’s new stick-shift Scion FRS, with entertaining results which we’ll come back to in a moment.

Does Tanner Fox Have Any Brothers or Sisters?

Is seems that Tanner has the golden touch with internet fame, not only are he and girlfriend Taylor both online celebrities, but his older sister Lindsay is also rapidly becoming more popular on Youtube. She currently has over 300,000 subscribers and collaborates with Tanner on a regular basis which has helped to boost her own online popularity rapidly in the last six months.

What Is Tanner’s Salary & Annual Earnings in 2017

Tanner’s net worth is estimated to be $500,000 currently, but his endorsement deals, sponsored content and income from Youtube should bring him in that much again by the end of 2017. As for his online shop with it’s professional layout, reasonable prices and huge range of TFox branded goods, my guess is as good as anyone’s what additional revenue that will bring Tanner Fox, but even a conservative estimate would put Tanner’s income for this year as likely to be at least $300,000, and possibly as much as double that figure. If Tanner’s success continues to grow at the same phenomenal rate that it has in the last year, it’s likely that Tanner will be a teenage millionaire by 2019 at the latest.

Where Does Tanner Fox Live?

Tanner still lives at the Fox family home in San Diego, although he often travels abroad. He particular enjoys spending time in the Spanish city of Barcelona which is his favorite vacation destination. He recently took girlfriend Taylor to Disneyland and the pair often travel together, and of course they usually can’t resist the urge to produce a few videos for their every growing army of fans to enjoy while they’re away.

What Car Does Tanner Fox Drive?

It’s not just scooters that Tanner enjoys speeding around with, he has a number of high performance sports cars and features them in his videos frequently. He has featured a number of sports cars previously in his blogs, including a Ferrari and a Lamborghini that he has rented for a few days, but In August 2017 he showed off his latest new car, a 2013 manual transmission Scion FRS than he had bought a few months earlier. Tanner has given the Scion a customized paint job with his TFox brand signature on it, and he also calls the car Vanessa. He attempted to teach girlfriend Taylor to drive the 200 horse power high-performance vehicle in one of his vlogs recently and after a few stalls she eventually got the hang of the stick shift gear changing, but so far Tanner hasn’t had chance to try out the car’s impressive 143 MPH top speed, or at least he’s not admitting to it publicly.

Tanner Fox and Collaborations With Other Online Stars

Tanner’s popularity and positive personality have kept him free from the drama and controversy that many other big Youtubers get involved with, and he is a popular choice for other Youtube stars to collaborate with. He has worked with a number of other online stars including hugely popular celebrities such as Casey Neistat and Roman Atwood. Recently he vlogged from Roman Atwood’s home during a visit and even got a chance to try out his fellow Youtuber Stars powerful GTR car. Tanner also uses his popularity to promote other smaller users and frequently collaborates with best friend Dylan Hawkins and others, who all enjoy the benefits that come from working with one of Youtube brightest new stars.