The Lapel Project Update – What Happened After Shark Tank 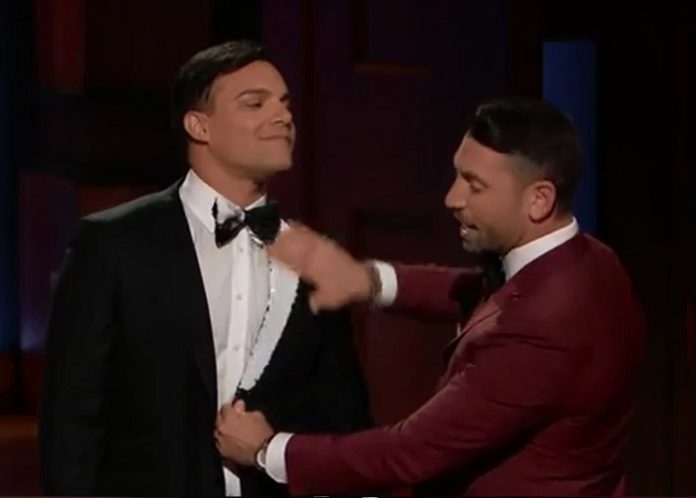 The Lapel Project Before Shark Tank

I’m the sort of person that always looks as if I’ve been dragged through a hedge backwards, no matter how much effort I put into improving my appearance, and that’s probably why I appreciate that effortless look of sophistication that the sharks generally carry off so well. There’s no doubt that successful people tend to be smartly dressed, even Kevin O’Leary manages to look professional in the tank, even if it’s a professional undertaker that he resembles the most.

The brains behind The Lapel Project, Sebastian Garcia and Raul Bernal, are a pair of entrepreneurs with a background in the clothing industry, and they developed an effective and far cheaper alternative to something that most men experience at one time or another, the costly price tag of renting a tuxedo. They developed a simple solution by creating stick-on lapels that could easily transform any jacket into a wide range of tuxedo styles, from sober and professional to loud and zany. With only one bricks and mortar retail outlet selling their product, Sebastian’s own clothing store in Miami, Florida, they achieved modest but impressive sales, but they sought the help of a shark to launch the online end of their operation, and help their company grow.

The Lapel Project On Shark Tank

Sebastian and Raul came into the tank in September 2016 smartly dressed in jackets and bow ties, after a quick introduction Sebastian launched into his fast-paced and well-delivered pitch. He began by announcing The lapel project business had developed a ‘game-changing’ accessory that would revolutionize the fashion World, added that it would disrupt the clothing industry leaving them ‘sleepless at night’, that last vaguely sinister claim made all the more sinister by the sight of Raul, nodding silently at the back not completely unlike a mob enforcer.

The pair explained, with much enthusiastic waving of hands, that special events such as weddings, proms and formal events happened all the time, with the result that people were frequently left with the choice of either buying a tuxedo and then letting it gather dust for months at a time, or alternatively having to go through the inconvenience of renting one, an option that still cost a couple of hundred dollars, but now they and The Lapel Project offered a third solution to the problem.

The announced that they had developed an accessory that could quickly and easily convert any jacket into a tuxedo with the help of stick-on lapels, the sharks laughed with relief that it wasn’t anything more sinister. Raul continued, revealing that the company offered a huge variety of lapels in different fabrics, styles and designs. Sebastian applied some funky black and white lapels to Raul’s plain black jacket, and the hitman was transformed into an emcee in an instant. Raul applied a single velvet black lapel to Sebastian’s red jacket in seconds, demonstrating the ease with which the lapels could be applied, and the sharks looked impressed.

‘Wow, it actually looks really good’ Robert Herjavec said, sounding surprised, and Daymond John agreed. Sebastian finished up the pitch by declaring that this idea was completely new, it had no predecessor, and it was the ‘evolution of fashion’. At the end of the pitch none of the sharks were in any doubt that Sebastian and Raul were one hell of a sales team, Kevin O’Leary even gave the pair a short standing ovation to show his appreciation of the presentation, but were the sharks going to be as impressed with the entrepreneurs stick-on lapels too?

Sebastian and Raul were looking for an investment of $150,000 in exchange for a 20% stake in their business, and the sharks were looking interested after the hyped-up pitch, they eagerly tried on their own samples, Kevin appeared to love his skull-themed lapels, which only enhanced his undertaker like appearance, and Daymond danced back to his seat, clearly happy with his bright red and blue jacket accessory and popping a quick pose for Mr Wonderful. Even Lori got in on the action, with a more feminine jacket and lapel just for her. Kevin wanted to know if the lapels could be taken off and re-applied, and Sebastian confirmed they could be used up to ten times if they were looked after. Lori asked if the adhesive used would damage any fabrics, and Sebastian assured her that it had been extensively researched and was safe to use on anything.

The reason for Sebastian’s confidence around the clothing industry soon became clear, after the sharks had been impressed by an enormous profit margin, the lapels cost $5-$8 to make but they were being sold for between $50 and $100, Robert asked about sales. Sebastian revealed that the lapels were only being sold at one brick and mortar store in South Florida, and after the sharks probed a bit further, admitted that it was his own store, which considering his sales technique and good knowledge of the clothing industry, wasn’t all that much of a revelation to some of the sharks. In just six months sales had been $16,000 from Sebastian’s store alone, and that impressed the sharks even more. Kevin asked about patents and Sebastian confirmed that a utility patent was pending, he also revealed that they needed the investment to launch the online sales end of the business.

The Lapel Project pair had not made a wrong step in the tank, but it all came down to whether the sharks would get the idea behind the lapels, Robert Herjavec clearly didn’t. He asked if the lapels were a ‘gag’ gift type of purchase, which Sebastian and Raul were quick to deny, emphatically, but Robert just didn’t believe it ‘Who would wear something like that?’ he asked, yet Mark Cuban seemed to get the idea, ‘I would!’ he replied enthusiastically. Mark further confirmed he would wear the lapels to the Whitehouse and to his own wedding. Kevin was more concerned if Sebastian, who he called a great salesman, was a ‘pain in the ass to work with’, but Mark Cuban was serious, and he was ready with an offer.

Mark could use his extensive Amazon contacts and online experience to help The Lapel Project ‘Crush it’ online and he proposed a $150,000 investment, but in exchange for 30% equity in the business. Both Lori and Daymond wanted to speak, but Mark was keen to close the deal, he tried a little pressure on the pair, warning them they would ‘Lose the deal’, but Daymond had his say first. The fashion guru was impressed, but his experience with accessories was that they were not often successfu. He believed Sebastian and Raul’s salesmanship and place of business in Miami, where they were well-established, well-known, trusted and liked, had been the main reason for the impressive $16,000 in sales, and after once again complimenting the pair’s sales technique and wishing them luck, Daymond dropped out of the negotiations.

‘Back to me’ shouted Mark Cuban, still waiting for an answer, but Lori spoke up first with another rejection. She was unimpressed with the look of the lapels, without coming right out and saying it she suggested that most women wouldn’t be impressed by a man wearing the lapels, and clearly Lori was in agreement with Robert Herjavec in seeing the lapels as something of a novelty item, and she too dropped out.

With Mark Cuban about to blow a fuse, Kevin took the opportunity to summarize the situation, he began with ‘So the only fashion guru, and the only female sharkette have both…’, but that was all he needed to say. With Robert and Kevin clearly not interested, and Daymond and Lori out, Sebastian and Raul made a quick decision and accepted Mark’s offer, to the sharks obvious relief, and they all shook on the deal.

The Lapel Project Now in 2018 – The After Shark Tank Update

Immediately after the show Sebastian and Raul were happy to have Mark Cuban as a new partner, and in the year since their segment first aired the new partnership has produced some impressive results. Perhaps the only time that the entrepreneurs lost their composure in the tank was when Robert Herjavec suggested the lapels were just a novelty item, and his attitude in contrast to Mark Cuban’s enthusiasm for the idea perfectly illustrates the subjective nature of fashion, some people think the lapels look tacky, and some people just love them. There’s no doubt looking at thelapelproject.com that Mark Cuban is only too aware of this, and he’s made the new online end of the business almost unbearably cool.

The company website sports the sort of perfectly configured automatic slide-shows that bring before your eyes at least three high quality pictures of cool people doing exciting things in idyllic locations before you’ve even found out where all the icons are, all without being overwhelming. It’s a slick, well-presented site that’s far better than most company websites, everything about it speaks professionalism and coolness, but that’s if you’re the sort of person who thinks the lapels look cool in the first place. The variety of products available is enormous, with only the skulls motif lapel being sold out when I visited the site, which I secretly suspect is caused not only by Halloween being around the corner, but also by Kevin O’Leary ensuring that he’s got a lifetimes supply of them.

One other area in which things have changed is the pricing. Most lapels, bow ties and other accessories, such as the comfy looking velvet loafers are available for around $40-$50. A matching lapel set and bow-tie can be as little as $50, and lapels on their own as little as $30, and Mark Cuban’s influence can be seen in the sale price reduction, ensuring that the potential market for The Lapel Project products is as large as possible. The company also offers customization of designs, for branding or marketing, and they have made a push towards focussing on group orders, offering a complete package for a number of people, suggesting that they are the perfect low-cost alternative for bridal parties, events and galas. Robert Herjavec may have thought The Lapel Project was just a joke, but the company founders and their new shark partner are taking things very seriously, and hoping to fill a major gap in the market.

Now in 2018, The Lapel Project has not exploded in popularity since the segment in the shark tank a year ago, but the company has launched an impressive online sales arm. Sabastien and Raul are working to promote their company and products through social media, they post regularly on Twitter and Facebook, and have been featured in both local Miami publications, but also The Washington Post and in Forbes. Even if the Sharks are a good indication of the general population, and only one in five viewers liked the lapels, the more than five million that watched the Shark Tank that night should produce enormous growth for the company in the future, and Mark Cuban will be proven to be the smartest shark for taking a risk, even if Robert Herjavec doesn’t agree.