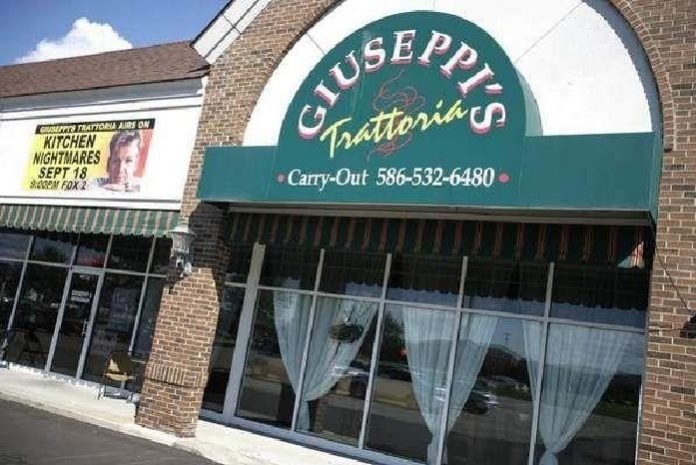 Giuseppi’s Trattoria in Macomb Township, Michigan was having a turbulent and tension filled time when Gordon first came along in mid 2008 to sort out this particular kitchen nightmare. A competing father and son in the kitchen combined with their traditionally fiery Italian temperaments was creating a family feud, and less than superb service for the customers of this family-owned Italian restaurant.

Owner Joe was constantly arguing with son Sam, who he believed wasn’t pulling his weight, Sam in turn was frustrated at Joe’s insistence on doing everything his own way. Mom Kathy was caught in the middle of the frequent fighting in the kitchen and concerned that Joe, a diabetes sufferer was driving himself into an early grave through stress and the inability to leave the restaurant to be run by Sam. The family business was failing and Joe and Kathy were seriously in debt, but could Gordon Ramsay save the day and get Giuseppi’s back into profitability before it was too late?

Kathy picks Gordon up from the station to take him to the restaurant, and explains that she believes Sam is not committed or mature enough to take over the restaurant. She and Joe are $150,000 in debt and at risk of losing their home. They wanted Giuseppi’s to give Sam a steady financial future so they could enjoy their retirement, but Giuseppi’s is losing money fast and tearing the family apart.

When Gordon arrives at the restaurant he’s dismayed at the outdated décor, the restaurant has only been open for two years but Gordon thinks it looks like something out of the 1970’s. He orders potato skins and octopus salad for starters followed by the house speciality, the eggplant rollatini and at first he’s pleasantly surprised by how quickly his starter arrives, but unfortunately Gordon isn’t quite as impressed by the quality of the food on offer.

The cheese on Gordon’s potato skins is ‘Hideous’ and the octopus salad is ‘Like rubber’, even server Dawn reluctantly agrees that it’s far too chewy when Gordon invites her to take a bite of his overly-elastic salad. The house speciality doesn’t improve Gordon’s impression of the food. The rollatini is piping hot explains Gordon, as if it’s just been ‘Nuked in a microwave’, which to be fair, it has. The food may be quick to arrive but it’s the microwave oven that’s doing most of the actual cooking in the kitchen. Gordon finishes the rest of his meal listening to Joe and Sam arguing in the kitchen, observing that it sounds ‘Like there’s a war going on’.

Gordon, Joe, Sam and sous chef Brian, who’s only part-time and a truck driver the rest of the time discuss the standard of the food. Gordon calls the rollatini bland and spongy, and Brian admits it was microwaved. Joe tells Gordon there have been no complaints about the food but Gordon replies that the customers are ‘Voting with their feet’, hence the empty seats and ever decreasing bank balance.

Gordon observes the dinner service and notices the roast potatoes are also microwaved, he asks Brian why and the sous chef explains that that’s what Joe wants, fast food. Sam thinks the food is too fast and Gordon thinks the whole kitchen operation is just sloppy. Many customers seem to agree, multiple dishes are returned with complaints and Joe kicks Sam out of the kitchen, unable to let anyone else do things their way. Gordon observes that Joe talks to Sam and Brian like ‘dirt’, and after the dinner Gordon sits down with the chefs to explain the biggest problems that’s he noticed during the evening at Giuseppi’s.

Gordon believes no one is striving to be better, Sam remarks that he hates frozen food and wants to cook fresh. Gordon asks Joe if he believes Sam is a good chef, but Joe dodges the question, and only replies that Sam likes to cook. Joe thinks Sam isn’t committed enough, he only works 25 hours a week and has got no ‘Fire in his belly’. There’s a final emotional argument between Sam and Joe to end the day, and Gordon realizes that there’s huge tension between father and son, and that’s at the root of the family restaurants lack of customers and poor food.

The next day Gordon organizes a cook-off between Sam and Joe, with the resulting dishes to be subjected to a blind taste test from the rest of the staff. Using all fresh ingredients, Sam creates a salmon dish and Joe opts for a stuffed pork chop served with an Italian sauce. The staff prefer Joe’s pork creation overall but Gordon is impressed with both dishes and announces that they are both good enough to be specials that night. Later that evening in the kitchen Joe once again takes over in his haste to rush food out of the kitchen. Sam begins to get frustrated and eventually Gordon, observing that Joe is ‘magnetized to the stove’ has had enough, and he insists that Joe leaves Sam and Brian to do the cooking, eventually resorting to almost physically throwing Joe out of the door.

That night Gordon’s team perform one of their miraculous overnight makeovers and transform the restaurant. That old-fashioned 1970’s look goes out the door and with some modern stylish furniture, some subtle pastel shades of paint and a few family photos adorning the walls Giuseppi’s is transformed into a contemporary and comfortable modern restaurant. The next morning everyone is impressed by the new look of the restaurant and Kathy is moved to tears. Gordon also arranges a promotion for relaunch night by organizing the 1st annual Giuseppi’s bowl-a-thon in aid of diabetes charities, and it’s a big success. To complete the positive new look of Giuseppi’s Gordon introduces a brand new menu. It’s full of fresh ingredients, it’s quicker, more exciting and modern and complete – and best of all there’s no microwave oven involved in producing anything, but can Joe let Sam step up to the plate, and can Sam manage things without Joe there to keep things together?

On relaunch night it isn’t long before Joe is taking over yet again, he’s hurrying the food out of the kitchen before it’s ready and the complaints begin to pile up. Gordon tells Joe to relax and not to rush things, but he might as well be talking to a brick wall. Eventually Gordon once again essentially forces Joe out of the kitchen and Sam and Brian finally get things running more smoothly, while Gordon stands guard to stop Joe coming back. With Joe finally taking a much needed rest Brian begins to goof off in the kitchen and Sam loses his focus. The complaints begin again and one table even leaves as they’ve been waiting so long. Gordon confronts Brian who unwisely decides to blame Gordon for the problems that the kitchen is having. After a brief burst of bleeps and much wrinkle-foreheaded consternation from Gordon, Brian storms out of the kitchen and drives off.

With Brian gone Joe returns to the kitchen and this time he and Sam work together much better, and for the rest of relaunch night things run far more smoothly, but of course there’s a still a lot of tension in the family and Gordon has got a plan to deal with the underlying tension between Sam and Joe too. During the previous day he has asked Sam to write a letter to Joe, saying what he would really like to say, and he’s done the same with Joe. He has also asked Kathy to write a letter to both Sam and Joe explaining how she feels, and in one of the most emotional and tear-jerking finales to Kitchen Nightmares ever, he makes all of them read out their letters in front of each other.

Giuseppi’s Now in 2018 – The After Kitchen Nightmares Update

Many viewers praised Gordon for showing his softer side in this emotionally charged episode. During the letter reading emotions ran high, and there wasn’t a dry eye in the house. Joe eventually agreed to let Sam take charge of Giuseppi’s and admitted he finally believed that his son was ready to do so. Gordon’s visit to Giuseppi’s ended on that high note, and at first things were far better at Giuseppi’s. Family relations were much more relaxed and there was plenty to be positive about. Reviews of Giuseppi’s were overwhelmingly positive and the place was packed, but unfortunately things didn’t stay that way for long.

Gordon revisited Kathy at the restaurant one year later but he was met with bad news. Business had tanked with the economic crisis of 2008, and although family relations were much improved, in part due to Sam moving into his own place with the result that he and Joe were getting on much better, Kathy also revealed that she and Joe were due to lose their house in just a couple of weeks and were looking for a new place to live. But there was a final blow in the pipeline just a month after Gordon’s return visit. Giuseppi’s finally closed in July 2009, the economic crisis and trouble obtaining a liquor licence were the main reasons behind the eventual closing of the family business, and sadly that was the end of the line for Giuseppi’s. In retrospect, the financial problems facing Joe and Jathy were possibly insurmountable when Gordon attempted to revive the failing fortunes of the family business, but his visit did appear to at least bring a feuding family together to fight their problems as one, and just for once we all saw the softer side of Gordon Ramsay.