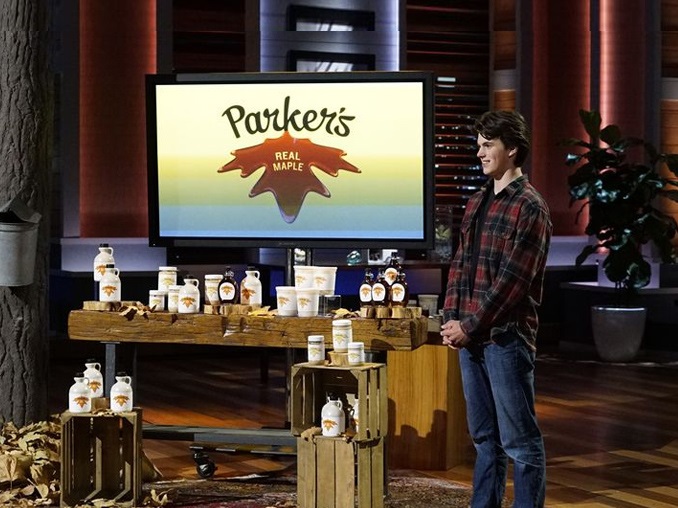 The idea for Parker’s Maple came back in 2009 when 11-year-old Joshua Parker went on a school field trip to Northern New York state to learn how Maple syrup was made, and it’s no understatement to say that the trip was quite inspirational for him. Josh, from Canton, New York was fascinated by the idea that he could make his own maple syrup using just the trees in his own backyard, and it wasn’t long before he was doing exactly that.

After a few years making progressively larger batches of his own maple syrup, Josh finally decided to start his own business making that sweet silky syrup, and he was still only 15 years old. Josh prepared a business plan and convinced a bank to lend him the money to buy the equipment he needed. His dad co-signed on the agreement and lent him another $70,000 to get him started, and Josh began to spend every waking minute working to make his new business a success.

Josh Parker knows maple syrup as well as anyone, and there’s no doubt that this product is appreciated by all who are lucky enough to taste it, and as a result of his hard work, his business began to grow accordingly. In June 2015 he was invited to appear on the Glenn Beck Radio Program which helped his maple syrup gain further attention, which led eventually to his products being stocked in 500 small retail stores. By the following year, Parker’s Maple was starting to get attention from Costco, the second largest retailer in the World after Walmart. Josh knew that with the help of a shark partner his entry into the World of large-scale retailing would be much easier, and with that aim in mind, he went to the shark tank in mid-2016 hoping to secure a sweet deal with one of the sharks.

The sharks always like to see a young entrepreneur enter the tank, and Josh was still only eighteen when he appeared on shark tank. He may have been inexperienced in business, but it quickly became clear that Josh had a real passion for the maple syrup industry. After announcing that he was looking for a $200,000 investment in exchange for a 20% stake in Parker’s Maple business, Josh told the sharks about that life-changing school field trip and a brief summary of the progress he had made since then. He explained that he had created a range of maple syrup products, such as maple syrup cotton candy and maple syrup butter, and stated that he needed a shark to help him take his company to the next level.

The pitch was well-presented by Josh, and well-received by the sharks. They gave a brief round of applause and then the young entrepreneur handed out a few samples for the sharks to try for themselves. The sharks may have liked Josh’s pitch, but they loved his products. Amongst a series of satisfied noises coming from the sharks, Lori Greiner managed to tell Josh that his maple syrup cotton candy was ‘really good’ before she was compelled to sample some more. There’s a recurring theme here, and that’s the fact that no one is in any doubt that the maple syrup products that Josh makes are exceptionally well-received by everyone who tries them.

While the rest of the sharks were sampling the range of Parker’s Maple products far more than they really needed to, Kevin O’Leary revealed that before he became known as Mr. Wonderful, he had another nickname that was completely relevant to this particular situation. Kevin explained that many years ago he had been employed part-time as a maple syrup maker, and his enthusiasm for the role had been so great that his friends at college had referred to him as ‘Maple Man’. Kevin told Josh that he had ‘Come to the right place’, and meeting another maple syrup maestro certainly seemed like a good sign for Josh.

Kevin managed to finally stop himself sampling the maple syrup butter and asked Josh what sales he had achieved so far. The young entrepreneur answered that he had made sales of $360,000 since the launch of Parker’s Maple three years previously. Kevin inquired what sales had been made in the last year, and Josh replied that he was projecting total sales of $1.5 million by the end of 2016.

Barbara Corcoran wasn’t losing her mind over the samples in the same way as some of the other sharks, she asked what was so different about Josh’s maple syrup, to her it tasted the same as any other. Josh explained that he saw maple syrup as a commodity product, and he was concentrating on building up his own brand with his unique line of items, such as the cotton candy and the maple syrup butter. Josh revealed that he had recently re-branded the maple syrup butter, and had also just landed a $100,000 order from Costco.

So far Josh had impressed the sharks in the tank, but then the subject of his profit margins came up. Robert asked what the butter sold for and Josh told him it retailed for $11.99. Kevin asked what the cost of the product was and Josh admitted it cost $8.46 to make. Robert remarked the profit margin was ‘Awful’ and Kevin O’Leary agreed it was ‘Very thin, elaborating that this was a common problem with high-quality maple syrup products as they were so expensive to make.

Mark Cuban asked about the finances of Parker’s Maple. Josh told him that outstanding loans against the company were approximately $300,000, which made the Texan shark wince, but Josh quickly explained that company assets comprising of the equipment to make the syrup, plus about $180,000 worth of stock were worth about the same amount. Josh explained that a large purchase order that fell through at the last minute had resulted in such a large amount of unsold inventory, but the sharks were looking a little less enthusiastic about those great tasting products now.

Barbara Corcoran returned to the sales figures, she asked where the $1.5 million in projected sales were going to come from. Josh explained that he expected to increase sales through his deal with Costco, and had projected his sales based on Parker’s Maple being stocked in Costco nationwide, but Barbara saw things differently. She explained that in her experience Costco would usually see how a product did in one store and roll it out to other stores gradually if it was successful. She thought that Josh’s projected sales were overly optimistic and for that reason, she was dropping out.

Mark Cuban had noticed that the maple syrup cotton candy was only 114 calories, which impressed the other sharks. Mark believed that Josh should market that healthy aspect of this product more and also suggested that it should be priced at $2.99 instead of $1.50, and it would still be the best selling Parker’s Maple product. But Mark also believed that in order to become profitable Josh needed to scale up his production enormously from its current level, and because of that he too was dropping out.

Robert Herjavec admired Josh’s drive at such a young age, he compared him to a young Kevin O’Leary. ‘Maple man’ laughed Kevin and Robert agreed, Josh was a young maple man. But Robert also agreed with Barbara that Josh’s projected sales were wildly optimistic and he believed that the young maple man had ‘A long way to go’. With that Robert dropped out too, leaving only Lori and Mr. Wonderful in the negotiations. Lori wasn’t going to offer Josh a deal, she also thought he was too optimistic and believed that his margins were far too low. She admired his commitment and called him a ‘Dynamo’, but Lori wasn’t interested in a deal.

Kevin O’Leary was the last shark to speak, he may have once been a young maple man himself, but now he was a shark first and foremost. Kevin saw problems with the profitability of the company and the lack of confirmed deals. Kevin admitted he saw no way that he could make a deal and with that he dropped out too, leaving the young maple man without a deal in the tank.

Sales increased after shark tank and in 2017 Josh has added some more sweet treats to his line of delicious maple syrup products, including Maple syrup now available in tin cans, organic cotton candy, and maple syrup spread. In October 2017 Josh returned for a second appearance on the Glenn Beck Radio Program, and he revealed that there have been quite a few positive developments not only for his business but also in his personal life. In January 2017 Josh married Alee, his long-time girlfriend and the couple now have a son born earlier this year. Alee has joined the family business too and taken the role of Chief marketing officer for Parker’s Maple, a role that she admitted on Glenn Beck’s show was the easiest job in the World, considering the unanimously positive reception that the line of Parker’s Maple products receives.

The Parker’s Maple line has now been taken on in two regions of Costco in the North East United States, which is about 300 stores, and it’s also been taken on in another 200 stores of the trendy food chain Wholefoods. Wegmans, a regional supermarket chain with 95 stores on the East coast is now stocking Josh’s entire line in all of their stores, and it seems that perhaps Josh’s optimism was justified considering the deals he has made since his shark tank appearance.

The maple syrup industry is a multi-billion dollar a year industry, and recently there have been many media articles about the health benefits of the product. Canada, generally seen as the home of maple syrup is the World’s biggest producer and exporter of Maple syrup, and it exports around a third of billion dollars worth of it every year. Currently, around 70% of the World’s supply of maple syrup comes from Canada, but before large-scale production of it began in Camada in the 1990’s, mainly in Quebec, the United States was traditionally the biggest producer and market for maple syrup products. Josh Parker is still only 19 years old, and so far he’s made impressive strides in bringing maple syrup back to its homeland. He believes he can re-invent the maple syrup industry, and perhaps he is young and hugely optimistic, but as the sharks often say, you’ll never achieve anything unless you believe in yourself. Perhaps the best reminder of how good Parker’s Maple products are comes from Glenn Beck during Josh’s most recent appearance on his radio show. As Glenn puts it ‘Get this food and put it in your mouth, it’s very good’.