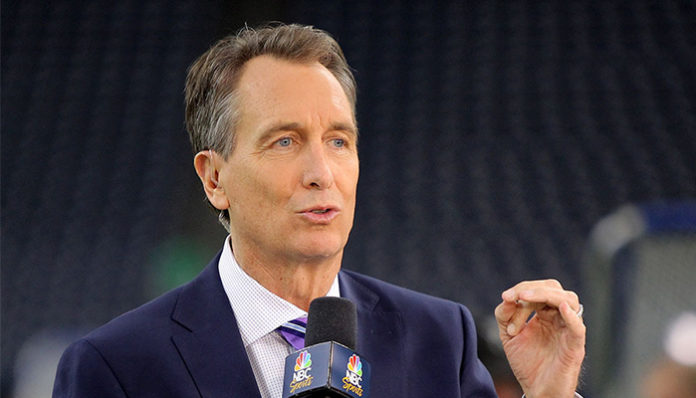 A former professional football player, Cris Collinsworth is best known for having played for the Cincinnati Bengals during the 1980’s. A wide receiver, he was drafted into the NFL while playing for the University of Florida. By the time he retired from the sport in 1988, he had made over 400 receptions for close to 7,000 yards, with 36 touchdowns. Though he no longer plays on the field, he stays connected with football through his career as a sportscaster for the NFL Network, Showtime, and NBC. Did we mention he also owns a sports statistic monitoring service?

In the years after his NFL career, Collinsworth worked as a broadcaster for numerous networks including NBC, and Fox. At one point, he even hosted the Guinness World Records Primetime Show in the early 2000’s. Extremely knowledgeable in what he does, he also acted as the correspondent for the 2008 Summer Olympics and the 2010 Winter Olympics, which were held in Beijing and Vancouver, respectively. For his contributions to football, he has won numerous awards throughout the years including fifteen Sports Emmy Awards.

Obviously, he would have earned some decent money back in his NFL days. With the expertise that he has, however, there’s no doubt that he’s currently enjoying a successful career as a sportscaster. How much does the former football player make now? According to various sources, the iconic announcer easily makes upwards of $1 million a year, working for networks such as NBC and Fox. In fact, his current net worth is estimated to be around $12 million. Let’s take a closer look at his career.

How did Cris Collinsworth Make His Money & Wealth?

Having inherited his father’s love for sports, Cris Collinsworth found himself involved with football at an early age. Raised in Titusville, Florida alongside his brother, he played as an All-American quarterback at the local Astronaut High School. By the time he was seventeen, he was recognized as the 100-yard state champion. A year later in 1977, he graduated from high school.

With his exceptional speed and height, Collinsworth had no problem attracting the attention of football coaches across the country. After pondering his options, he chose to attend the University of Florida through an athletic scholarship. Coached by Charley Pell and Doug Dickey, he played as a quarterback for the Florida Gators for three years, until 1980. Throughout those three years, he led the team to a number of victories. In total, he had caught 120 passes for close to 2,000 years, with over a dozen touchdowns.

The following year, he was drafted by the Cincinnati Bengals during the second round of the 1981 NFL Draft. With the team, he enjoyed a successful football career over the next eight years. For instance, in the first two years alone, he had won the Pro Bowl three times. Throughout his NFL career, he had 417 receptions, and 36 touchdowns across over 100 games.

How much did he make during his prime NFL days? While it may be difficult to get the exact numbers (seeing as how it took place a while back), we can put together some approximates. According to an article published in the New York Times back in 1982, the average NFL salary was around $90,000, during the time Collinsworth was playing for the Cincinnati Bengals. Seeing that his career lasted eight years, this would work out to be around $720,000.

Since his retirement from the NFL, Cris Collinsworth has pursued a career in broadcasting. Recruited by NBC, he served as one of their commentators during the 90’s; it wasn’t until after NBC had lost their broadcast rights, that he joined Fox. For many years, he worked as a color commentator on the NFL Sunday show. Some of the other games that he contributed to include the Wimbledon ’97, AFC Championship Game, Big Game XXIX, and Super Bowl XXXIX, to name a few.

Inducted into the Academic All-America Hall of Fame, with a number of Sports Emmy Awards, he has also corresponded for the 2008 Summer Olympics in Beijing and the 2010 Winter Olympics in Vancouver.

As of 2017, Cris Collinsworth serves as the main commentator for NFL Thursday Night Football. How much does the former NFL star get paid for said work? According to various sites, he makes more than $1 million a year, as one of football’s most iconic announcers.

On top of what he makes from his broadcasting career, Collinsworth is also the owner of Pro Football Focus, a website that offers sports analysis and statistics. Though some have questioned the accuracy of its ratings, its likely that the service provides him with yet another source of income.

The former NFL player has been married to his wife, Holly Collinsworth, who works as an attorney, since 1989.

Does Cris Collinsworth Have Any Children?

Yes, Cris Collinsworth has four children with his wife, two sons named Jack and Austin- the latter of which formerly played football at the University of Notre Dame, and two daughters named Ashley and Katie.

Did Cris Collinsworth Go to College?

Yes, he went to college. After completing high school in the late 70’s, his exceptional talent in football gave him admission to many colleges in the South. Ultimately, he chose to accept a scholarship offer to the University of Florida in Gainesville, where he played for the Florida Gators team, coached by Charley Pell and Doug Dickey.

What is Cris Collinsworth Famous For?

As a professional football player, Cris Collinsworth is best known for his eight-year-long career with the Cincinnati Bengals. Since his retirement, he has worked as an award-winning sportscaster for networks such as Showtime, the NFL Network, and NBC.

Cris Collinsworth currently resides in the city of Fort Thomas, Kentucky with his wife. According to satellite images, he has a basketball court located outside his home. Unfortunately, no further information on his location is available at this time.

We are unable to provide any images of Cris Collinsworth’s house at this time.

What Kind of Cris Collinsworth Does Vory Drive?

At this time, we do not have any information on Cris Collinsworth’s vehicle.

How Much Money Did Cris Collinsworth Make Last Year?

We do not have any information on Cris Collinsworth’s 2016 earnings at this time.

For many weeks, Cris Collinsworth has been presenting for the NFL Thursday Night Football program. According to a recent announcement by the NBC Network, however, Kurt Warner will serve as his replacement for two upcoming NFL games this December, due to scheduling conflicts.